Twitter uprising demands that Trump finally get kicked off the platform 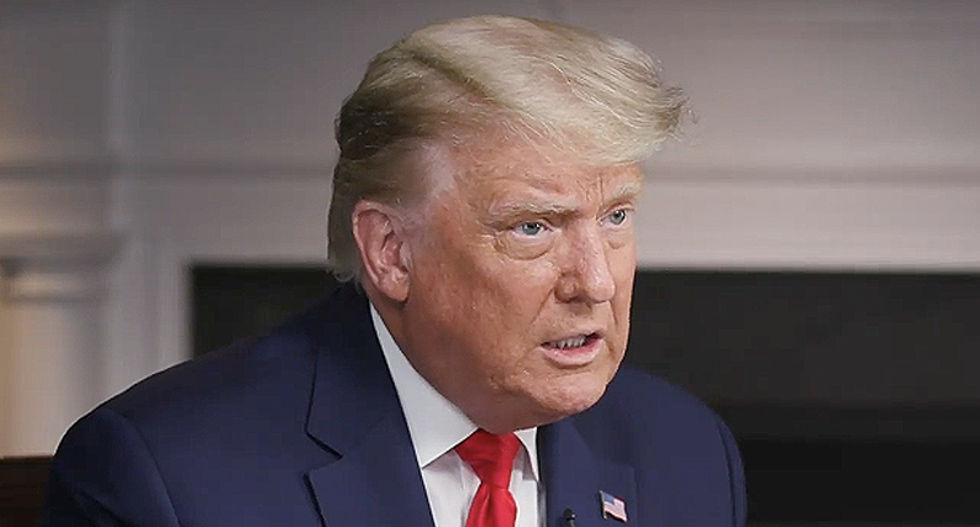 The hashtag #DeactivateTrump was trending Saturday on Twitter, apparently an organic uprising among the platform’s not-insane faithful to have the disinformer-in-chief sent packing when he is finally evicted from the White House.

It’s unclear how the Twitter community’s opinion will factor into any decision made by the company as to the future of its complicated relationship with Donald Trump. But the viral hashtag made for some entertaining reading.

The hashtag also served as a reminder that change is coming for Trump.

One key difference will be that Trump will lose his designation as a “world leader” -- established in 2019 because of Trump’s virtual American carnage -- and, The Verge reports, “Twitter confirmed that Trump’s @realDonaldTrump account will be subject to the same rules as any other user — including bans on inciting violence and posting false information about voting or the coronavirus pandemic.

That could slow Trump’s roll a bit, because he’ll no longer have a stay-out-of-Twitter-jail-free card for such nice purposes as inciting violence, which was essentially exempted under his world-leader status as cause for banning.

The Atlantic laid that out November 12 under this headline:

“Twitter’s Next Trump Problem: Trump is exempt from many of Twitter’s policies because of his status as a world leader. Come January, he could lose his favorite toy and most powerful weapon.”

The magazine found experts leaning toward the view that Trump’s days on the platform might be numbered. Here’s what it reported:

“Brian L. Ott, a communication professor at Missouri State University and a co-author of The Twitter Presidency, agreed that, were Trump to get banned, it would probably be for incitement to violence. “I don’t think there’s any question about that,” he said. “He has demonstrated a willingness again and again to legitimate and stoke political violence.” He will do it again, Ott said, and he will eventually get booted from his favorite website. It’s only a matter of time.

“We’ve had four years to see what the effects of not banning him are. If Trump is allowed to stay on Twitter, his power over the discourse will not fade away after he leaves office. He has gained more than 60 million followers throughout this presidency and losing reelection has not cost him one iota of social-media stardom; he’s gained another 1.5 million followers since Election Day. There’s no reason to think he won’t use this enormous audience to continue endangering people’s lives with falsehoods—a recent study found that Trump and 20 of his high-profile supporters were the source of 20 percent of retweets of election misinformation, and another found that Trump himself was “the largest driver” of coronavirus misinformation.”

“While Trump has rarely used @POTUS for the diatribes and ramblings that have become synonymous with his presidency, he has used it to retweet messages from his personal account to tens of millions of people,” the site noted.

The business website doesn’t believe Trump matters all that much to the stability of Twitter’s future. It noted that CEO Jack Dorsey had received a vote of support the day before the election after clashing with activist investors.

Whether that’s true remains to be seen. It’s a little hard to imagine Twitter actually giving Trump the boot--as it has done to the likes of Alex Jones and Steve Bannon--not so much because it can’t afford to, but because of Agent Orange’s entertainment value.

It’s even harder, though, to see the narcissistic Trump being willing to walk away from a platform of 88.9 million followers. Trump, of course, claims it’s more than that and has added his persecution by Twitter counters to his endless list of grievances.

Unless Twitter pulls the plug, expect Trump to continue a daily barrage of tweets and retweets aimed at undermining any progress Biden can make in fighting the pandemic, rebuilding the economy, rejoining the world community or lowering the temperature of national discord.

When Trump does, expect more #DeactivateTrump posts like this:

How does Donald Trump not go to prison for this? How has Twitter not shut the criminal down? How can Twitter avoid… https://t.co/HYpYXmOKoe
— Good Grief! (@Good Grief!) 1605471579.0

That does pose an interesting question: Wouldn’t it be harder for Trump to tweet from prison?