US formally quits Paris agreement as election hangs in balance 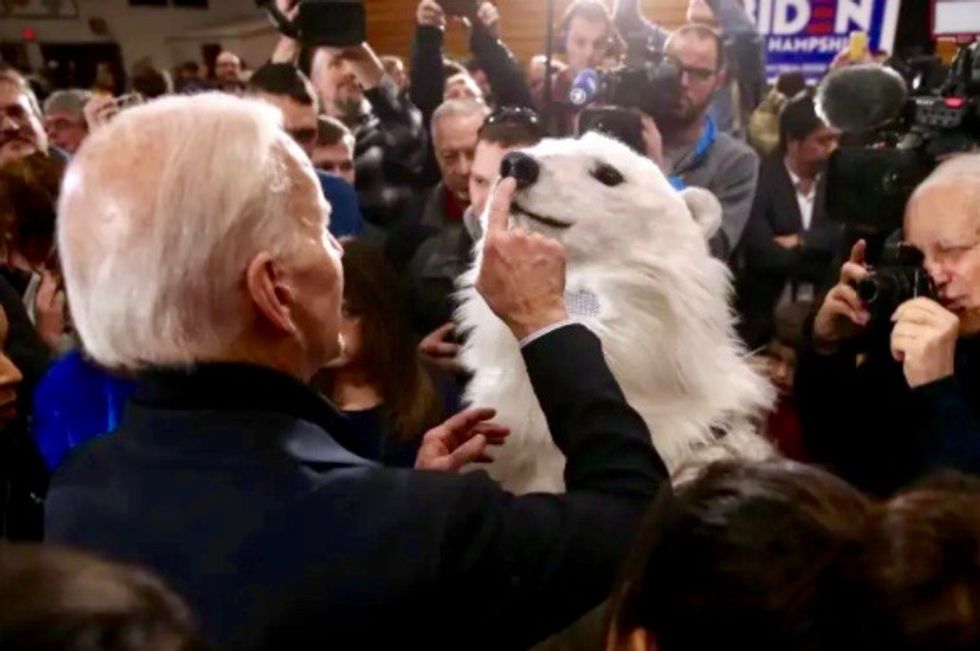 Democratic presidential candidate former Joe Biden taps the nose of a person in a polar bear costume during a campaign event in New Hampshire; the United States' future participation in the Paris climate accord rests on the 2020 election (AFP)

The United States left the Paris accord on Wednesday, becoming the first country to ever withdraw from an international climate change pact as the fate of its presidential election hangs in the balance.

It may prove to be a temporary blip before a Joe Biden administration rejoins the agreement. Otherwise, the global effort to rein in the Earth's warming will have to proceed without the government of the world's second biggest carbon emitter.

Either way depends on the outcome of a knife-edge US vote where both candidates have predicted victory.

Biden has proposed a $1.7 trillion-plan to take the US to net zero carbon emissions by 2050, while President Donald Trump has aggressively championed the fossil fuel industry, questioned the science of climate change and weakened other environmental protections.

If Trump wins it will be left to states, cities and businesses to take the lead.

However, a report last month by the group America's Pledge found that even without help from Washington, action from these groups would still make it possible for the US to cut emissions by 37 percent by 2030.

In the event of a Biden victory, the US will have to officially notify the UN of its willingness to return to the agreement.

"Our support, our belief in the need for strong and active Paris Agreement remains unchanged," he added.

Such a notification would be "the easy part," Andrew Light, a climate advisor to former president Barack Obama, told AFP.

The US will still be "outside the conversation" when Britain and the UN host a climate summit on December 12, the fifth anniversary of Paris, but poised to re-engage.

According to the UN's Intergovernmental Panel on Climate Change, in order to have a chance of keeping end-of-century warming below 1.5 degrees Celsius (2.7 degrees Fahrenheit), global emissions need to reach net zero around mid-century.

The target warming level was chosen to avoid triggering a series of catastrophic climate tipping points that could force humanity to inhabit only the planet's far north and south latitudes.

Niklas Hohne, a climate scientist at Wageningen University in the Netherlands and a member of a simulation group called Climate Action Tracker, wrote on Twitter that "Biden's climate plan alone could reduce temperature increase in the order of 0.1°C.

"This election could be a make or break point for international climate policy. Every tenth of a degree counts," he said.

Environmentalists say Trump's announcement that he would withdraw from the Paris agreement three years ago made it easier for countries such Australia, Saudi Arabia and Brazil to weaken their own ambitions.

Many of the ravaging impacts of climate change are already felt today: loss of sea ice, with the Arctic expected to be ice-free by mid-century; accelerated sea level rise, longer and more intense droughts and heat waves, stronger hurricanes and shifts in precipitation patterns.

Even if the US rejoins, it will face a credibility gap -- after all, it was also an architect of the Kyoto agreement that it never ratified.

That makes it crucial to ensure a shift towards climate action is permanent and not something a future Republican administration will just undo, said Light.

"We know from polling that acting on climate is not this red versus blue, Republican versus Democrat issue out there in the real world," he said, with a recent Pew poll finding more than 80 percent of Americans in agreement that humans contribute to climate change, including a plurality of Republicans.

Key to this plan will be Biden delivering on his pledge of massive economic stimulus and job creation.

There are already signs that market forces are starting to tip the energy balance from fossil fuels to renewables, but the transition has far to go.

Despite Trump's efforts to revive the coal industry, more capacity was retired under his presidency than during Obama's second term, while renewable energy hit record highs in production and consumption in 2019.

Natural gas, driven by hydraulic fracturing or "fracking," continues to drive the energy mix, accounting for 35 percent of production.

Biden views the fuel as a "bridge" to renewable energy and has said he won't ban fracking.