Vote as if your life depends on it -- because it does 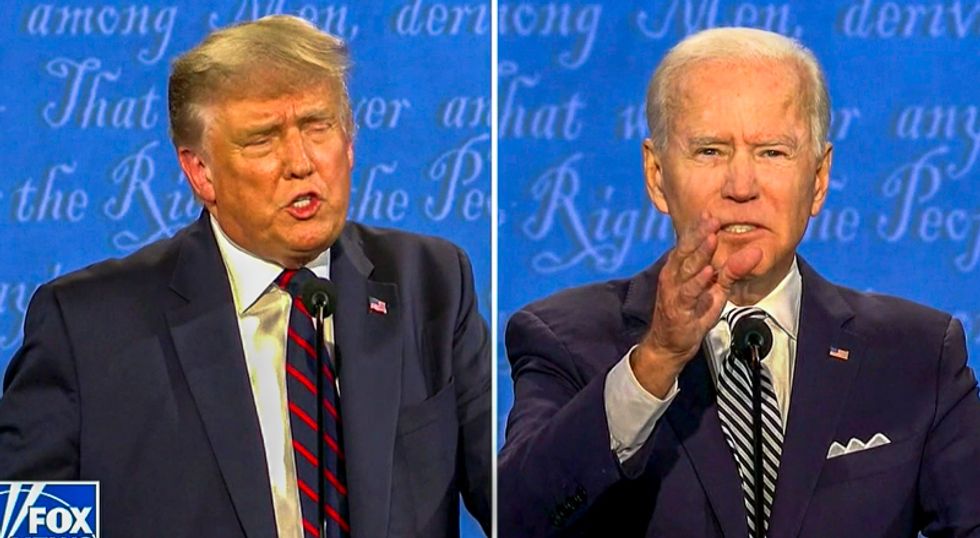 November 3rd is upon us. At the risk of overstating the obvious, if you haven’t already done so, and in the name of all that’s good and fair, please exercise your right to vote. It’s more crucial than ever. Truly.

I come by this attitude honestly. Somewhere around here I have a photocopy of an old article from my hometown newspaper in upstate New York. A friend mailed it to me. It’s just a paragraph or two, announcing that in the summer of 1971, when the 26th Amendment to the United States Constitution was ratified, lowering the voting age from 21 to 18, I was the first to sign up at the county clerk’s office.

When it comes to politics and government, I always have been. From the age of 11, I was running around the town handing out fliers and campaign buttons. I used my bicycle to deliver candy and spaghetti dinners to the poll workers on Election Day, ran errands for the local and county Democratic committees, even attended the New York Democratic Convention in Buffalo. This, in a community with a then-solid GOP majority.

As I graduated from high school, I was named as the token young person on a state party commission on youth participation in government and politics (I think I lowered the median age of the other members to about 53; the next youngest person there was our intern). I thus transitioned from nerd to wonk.

I was on George McGovern’s presidential campaign staff in 1972, something I’ve been thinking about a lot as I’ve watched the crowds at the torrent of rallies Donald Trump’s been throwing these last few days, several every 24 hours, like the manic obsessive he is, desperate for attention.

We had tons of big rallies at the end of our race, too, with lots of enthusiastic people and excitement. Then we lost 49 states. Just saying.

I have voted in every presidential election since, and most every other election in between; national, state, local and union.  I believe it is not only my right but also my duty as a citizen. I hope you feel the same.

So yes, a nerd and wonk I am, and, I’d like to think, a patriot. Because for the most part, I believe in this process with an almost sacred devotion. I believe in democracy, that everyone deserves a voice and a vote and that the suppression of that vote is the worst sin in American politics. That, and the obscene amounts of corporate and secret dark cash spent on candidates with the fraudulent claim that money is just another form of free speech.

In 2004, I volunteered for the non-partisan Election Protection coalition and was sent to Phoenix, Arizona, to poll watch. Around midday, a Vietnamese man came up to us, proudly holding his new certificate of citizenship. He was crushed to learn that because he wasn’t registered he would not be able to vote. I think of him often this time of year but especially now when it’s clearer than ever that everyone deserves the chance to vote and that we need automatic universal registration to insure that as many of us as possible can cast a ballot. Make it easy, not hard.

As has been said by many these last few weeks and months, this election is not your standard political fight of Republican vs. Democrat. It’s not only about the stultifying incompetence that has led to thousands and thousands of needless deaths, or about the depths to which our national discourse has been sunk or the president’s indifference to the environment, health and education. This is for all the marbles, for democracy vs. fascism.

Two recent studies offer disturbing evidence. Julian Borger of The Guardian reports on a study from the V-Dem Institute at the University of Gothenburg in Sweden, writing, “The Republican party has become dramatically more illiberal in the past two decades and now more closely resembles ruling parties in autocratic societies than its former center-right equivalents in Europe…

In a significant shift since 2000, the GOP has taken to demonizing and encouraging violence against its opponents, adopting attitudes and tactics comparable to ruling nationalist parties in Hungary, India, Poland and Turkey.

The shift has both led to and been driven by the rise of Donald Trump.

Then there’s this: In their new book, Authoritarian Nightmare, John W. Dean of Watergate notoriety and Bob Altemeyer, a professor of psychology, mine the results of a previously unpublished survey developed by Altemeyer and conducted with the help of the Monmouth University Polling Institute. It’s based on a respected measuring tool Altemeyer developed in the eighties called the right-wing authoritarian (RWA) scale.

Reviewing their findings, The Washington Post finds that the authors have uncovered “a striking desire for strong authoritarian leadership among Republican voters.

They also find shockingly high levels of anti-democratic beliefs and prejudicial attitudes among Trump backers, especially those who support the president strongly. And regardless of what happens in 2020, the authors say, Trump supporters will be a potent pro-authoritarian voting bloc in the years to come.

The Post continues, “Trump’s personal authoritarian bona fides are well-established, with experts across numerous academic fields warning that his attacks on basic democratic principles present a clear danger to the American political system. But his beliefs and actions are toothless without the support of millions of followers.” Those supporters, Dean and Altemeyer write, “will believe whatever he says and do whatever he wants."

It is a chilling image that has been played out time and again. Along with the embrace of a totalitarian state, that unthinking fealty accepts every piece of corruption, every numbskull conspiracy and lie, tries to deny the rights of others—including the right to vote—and blindly ignores the stunning ineptitude that for the past four years has failed to get anything accomplished but tax cuts for the rich and the appointment of conservative judges. The only other things "achieved" have been crippling deregulation and the bolstering of hate and injustice.

At Axios, Jonathan Swan reports, “Trump has interested himself in only a slim slice of the government he leads. Outside of trade, immigration, a personal war against the ‘Deep State’ and the hot foreign policy issue of the moment, Trump has left many of his Cabinet secretaries to work without interruption, let alone direction,” many of whom have been, “racing a ton of controversial conservative policy through the system…

As a result of Trump's lack of interest in much of domestic policy, whole swaths of his administration — Education, Housing and Urban Development and Transportation, to name a few — have escaped even the barest presidential attention.

The New York Times editorial endorsing Trump’s opponent Joe Biden was succinct: “Mr. Trump’s ruinous tenure already had gravely damaged the United States at home and around the world.” the editorial board wrote. “He has abused the power of his office and denied the legitimacy of his political opponents, shattering the norms that have bound the nation together for generations. He has subsumed the public interest to the profitability of his business and political interests. He has shown a breathtaking disregard for the lives and liberties of Americans. He is a man unworthy of the office he holds.”

In these last hours, Trump and his allies keep throwing their customary gorilla dust in larger and larger clouds, including frivolous lawsuits against voters and harassment of candidates and the electorate, but we now have the opportunity with our votes to tell the bullies to go to hell. Despite the long hours for many, it’s been great to see the lines of early voters across the country.  Those of us in New York City who took advantage of the option—more than a million people—were for the most part greeted by friendly election workers urging us along and thanking us for casting our ballots. It was a heartening experience.

Like many of my fellow New Yorkers, I have enrolled to be a poll worker myself on Election Day. I took the four-hour training, passed the open book test (twenty multiple choice questions with page numbers indicating where in the manual the answer could be found) and have been placed on stand-by duty at the Jacob Javits Convention Center, ready to be sent anywhere in the five boroughs as needed.

The dicey karma of being assigned to the Javits Center, where Hillary Clinton had her thwarted victory party in 2016, has not escaped me. But watch this space. With luck, a strong turnout and powerful legal backup, we soon may have a new president-elect. Maybe he’s not yet as progressive as many would like, but Joe Biden’s a step in the right direction, someone with experience who listens, who understands government and how to use it effectively, someone who has programs, plans, ideas and solid people around him. There’s potential for some real and positive change, not to mention a total rejection of the past four years of egregious and tragic policy. We must try.

“My country, right or wrong,” used to be the battle cry of the most jingoistic Americans, a slogan the current president would embrace, especially if his name were substituted for “My country.” Better the famous rejoinder to that slogan by Carl Schurz, Union general during the Civil War, US Senator, Secretary of the Interior—and German immigrant. “My country, right or wrong,” he once declared from the Senate floor. “If right, to be kept right; and if wrong, to be set right.”

November 3 is our chance to set things right. Vote.