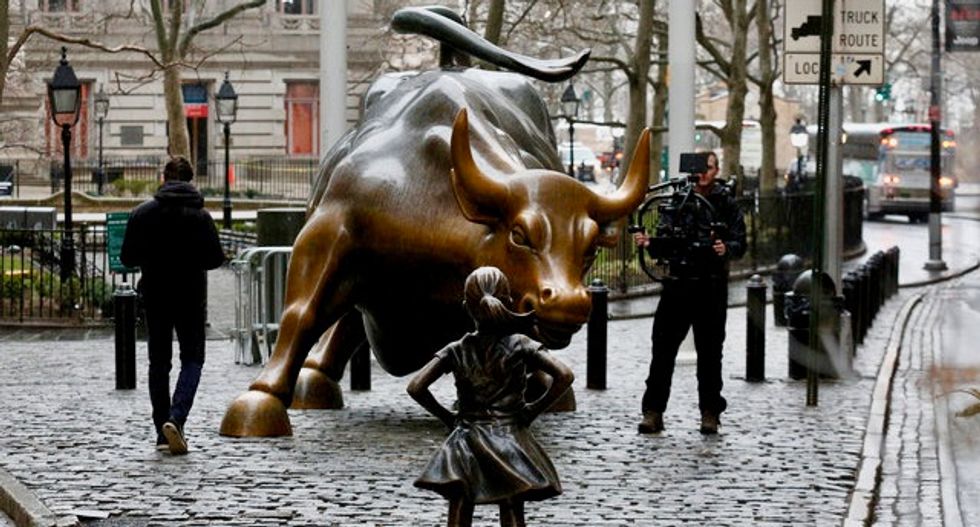 A camera man films a statue of a girl facing the Wall St. Bull, as part of a campaign by U.S. fund manager State Street to push companies to put women on their boards, in the financial district in New York, U.S., March 7, 2017. REUTERS/Brendan McDermid

Stocks rallied for a second consecutive day Tuesday morning after both European and Asian markets indexed higher from sharp losses last week due to the coronavirus spike. Wall Street investors seem to have taken a keen interest in how the votes are tallied this Election Day as the prospects for a stimulus bill will most likely influence how they respond.

The New York Times has broken down the four possible electoral outcomes and how investors might view them.

In the event of a Blue Wave, the Times expects spending to be "big" with Democrats holding all the cards, including the presidency and the Senate. The potential for this result fueled a short stock market rally in late September and early October. However, there are some caveats. "A blue wave also promises more legislation on taxes or regulation, so analysts think a thin Democratic majority in the Senate — the so-called light blue wave — that leaves some limits on the Democratic agenda might be a slightly better outcome for investors," according to the analysis.

Should the Senate remain in Republican control, "conventional wisdom on Wall Street is that Washington gridlock is usually best for stocks, because it means the government is unlikely to do anything that hurts corporate profits," the Times reported. It's probable that with the coronavirus pandemic and "ensuing economic slump" at hand, "soul-searching on this point" may occur, prompting "many Wall Street analysts to see a split decision on Tuesday — with Republicans retaining control of the Senate and Mr. [Joe] Biden taking the White House — as potentially the worst outcome for financial markets that are hanging their hope on a stimulus bill."

A third scenario involves President Donald J. Trump winning a second term and the GOP retaining control of the Senate. This scenario accounts for Democrats remaining in control of the House of Representatives. "In short, nothing will have changed in the standoff over how much spending to authorize, and optimism about another large-scale near-term stimulus package could quickly evaporate," the Times reported. However, "on the flip side, though, a second Trump term would ensure that taxes on companies or the wealthy won’t be rising. Plus, Mr. Trump could replace the Federal Reserve chair, Jerome H. Powell, with someone who is much more in tune with the president’s preferred monetary-policy posture and something stock investors might love: low interest rates forever."

The fourth scenario would take effect if the presidential contest is too close to call in swing states on Election Day and litigation climbs the ladder to the U.S. Supreme Court. This scenario is troublesome for investors -- even if Biden wins the election, Trump has suggested on multiple occasions that he might not accept the outcome or commit to a peaceful transfer of power.

"If Mr. Trump doesn’t concede, it’s hard to know when this fraught election season will end. In such an environment, there won’t be any progress on a stimulus deal, most likely delaying the arrival of any more help for the economy," the Times reported. "In other words, uncertainty that has weighed on markets in recent weeks will probably be projected out for the foreseeable future. That means the stock market would be in for another rocky ride until it’s clear who will lead the federal government for the next four years."