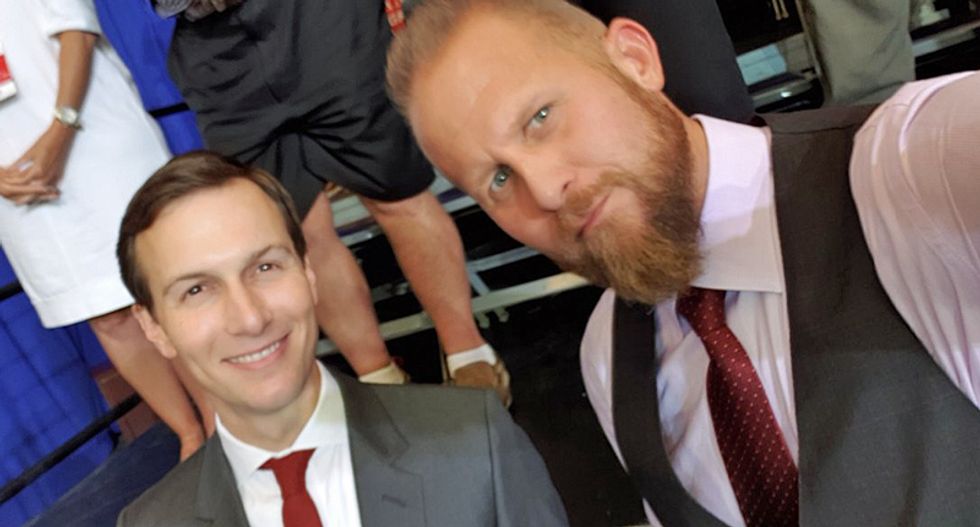 White House senior advisor Jared Kushner and Donald Trump reelection campaign manager Brad Parscale, via Twitter.
In August, Salon reported that the Republican National Committee (RNC) had paid about $5 million to a mystery marketing services company called Digital Consulting Group LLC, starting with a $2 million expenditure in February, just a month after the company was formed.Now, filings with the Federal Election Commission show that the RNC paid Digital Consulting Group more than $42 million for media buys, consulting and marketing between February and October. The company went from nonexistent to being the Republican Party's highest-paid vendor of the 2020 election, all in the space of eight months.

But Digital Consulting Group presents a mystery. No other political campaign or committee has reported any payments at all to the company. While a number of organizations share the name, this particular Digital Consulting Group — a Delaware company founded Jan. 15, 2020 — does not appear to have a website, and a Delaware business entity search does not reveal an owner or location. The RNC's spending reports list a virtual address in Wilmington, but beyond that the company cannot be traced.

That $42 million in expenditures makes this anonymous company the RNC's highest-paid vendor of the last two years, pulling in nearly $3.5 million more than the next-largest vendor, the direct-mail firm Communications Corporation of America (CCA), and topping third-place JDB Marketing, another direct mail provider, by about $19 million.

For further perspective, Digital Consulting Group received four out of the five largest payments that the RNC doled out between 2019 and 2020, including a flat $6 million on Oct. 7 for an unspecified media buy. In fact, it has received three of the 10 largest payments that the RNC has ever made — all to a company that was evidently constructed to conceal its origins and prevent the public from knowing anything about it.

"Pretty impressive that an LLC that didn't exist at the beginning of this year and still doesn't have a website has received $42 million from the RNC," Brendan Fischer, director of federal reform at the Campaign Legal Center, told Salon. "The RNC likely wouldn't take a $42 million gamble on a newly-created operation with no track record; presumably, Digital Consulting Group LLC was set up by trusted political operatives."

The RNC did not reply to Salon's request for comment for this article, but a party official previously told Salon that the RNC had hired the firm to place "targeted acquisitions across all platforms," adding that the firm works with individuals with "industry knowledge and expertise" in order to "increase efficiencies, improve service and achieve better market rates."

Then the official added a "reminder" that as of August, "the RNC previously announced that we would not be using Parscale Strategy for digital media buys."

Indeed, the RNC cut ties with former Trump campaign manager Brad Parscale's company in response to bad press and internal criticism resulting from revelations that Parscale had directed millions of dollars from the RNC to his personal consulting outfit.

Reached for comment about Digital Consulting Group, Parscale told Salon that he had "never heard of it."

"I have one company and my name is on it," Parscale said.

But Parscale still holds about half of the shares of a digital marketing company called CloudCommerce, SEC filings show. He sat on the company board until last December, a month before Digital Consulting Group was born.

Four days before Parscale left CloudCommerce, however, the company bought marketing rights to a set of data on 80 million "faith-based" individuals, a term of art likely designating evangelical Christians.

A former Trump campaign official told Salon that Digital Consulting Group appears to be an in-house operation, as was Parscale Strategy. If the company had been designed to fill the role previously occupied by Parscale Strategy, the official said, "there is no way" Parscale wouldn't know about it. Furthermore, the official added, Parscale worked on the Trump campaign until September, and would certainly be aware of a marketing and media vendor that had billed the RNC for $42 million.

In late July, the CLC filed a complaint with the FEC accusing the Trump campaign of laundering nearly $170 million through firms belonging to Parscale and campaign lawyers. The complaint claims that the campaign used one of those companies, American Made Media, to launder money to other vendors without disclosing the spending to the FEC.

The CLC's Fischer told Salon that the Digital Consulting Group arrangement struck him as possibly similar.

"These transactions are likely permissible if the LLC actually provided $42 million in goods or services to the RNC," Fischer said. But the party may have violated federal disclosure requirements, he said, "if the LLC merely acted as a pass-through to disguise the ultimate recipients of the RNC's spending."

Campaign finance expert Brett Kappel told Salon that transparency regulations are in place so donors know how their money is spent.

"One of the purposes of the FEC disclosure requirements is to reveal whether a candidate or committee is using donor funds to engage in self-dealing," Kappel said. "That purpose is thwarted if donor funds are transferred to an anonymous LLC."

The RNC would not explain how the party discovered a company with no web presence one month after it was formed. It also did not respond when asked whether Digital Consulting Group was affiliated in any way with officials of the RNC or the Trump campaign.

At the end of November, the RNC reported four more payments to Digital Consulting Group — part of its marketing efforts for Georgia's runoff election next month.