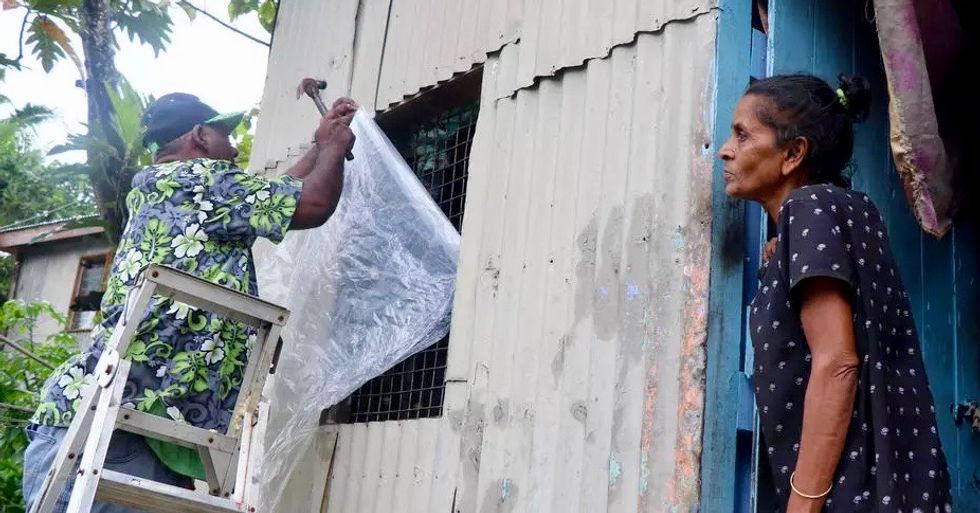 Coastal villagers in Fiji were told to flee for higher ground Thursday, amid predictions that super cyclone Yasa will generate monster waves of 16 meters (52 feet) when it hits the Pacific island nation.

The top-of-the-scale category five storm continued to gather strength as it roared toward Fiji, with wind gusts reaching 325 kilometers an hour (200 mph).

Yasa is forecast to make landfall late Thursday but there was already widespread flooding in the nation of 900,000, cutting off roads and leaving communities isolated.

"Destructive winds are likely to begin several hours before the cyclone centre passes overhead or nearby," the National Disaster Management Office said.

"Coastal dwellers will have to expect storm surge with waves as high as 16 meters."

Evacuation centres were opened in anticipation of widespread destruction on the scale of Cyclone Winston in February 2016, which killed 44 people and destroyed tens of thousands of homes.

Schools and public transport were closed, with non-essential public servants told to stay home for the rest of the working week.

"We don't want anybody losing their lives out there," assistant police commissioner Abdul Khan said.

"We will be here to protect you. Please take this seriously and let us prepare for a worst-case scenario."

The warnings were being heeded in Suva, where the downtown area was virtually abandoned Thursday morning as residents hunkered down.

"It's like a ghost town. There'll be no business here today," one office worker told AFP.

"It's calm now, but it's scary because we know it's coming."

New Zealand-based meteorological service Weatherwatch said Yasa was one of the most powerful cyclones recorded in the South Pacific, capable of cutting a swathe of destruction 300 kilometers wide.

Save the Children said lessons had been learned from Winston in 2016 and Fijians were taking cyclone preparation seriously.

"People are stocking up on water because there is a warning from the Fiji Water Authority that people will not have proper water supply for at least 10 days."

Fiji's borders remain closed due to the coronavirus pandemic, which Ali said could present a challenge for international relief efforts.