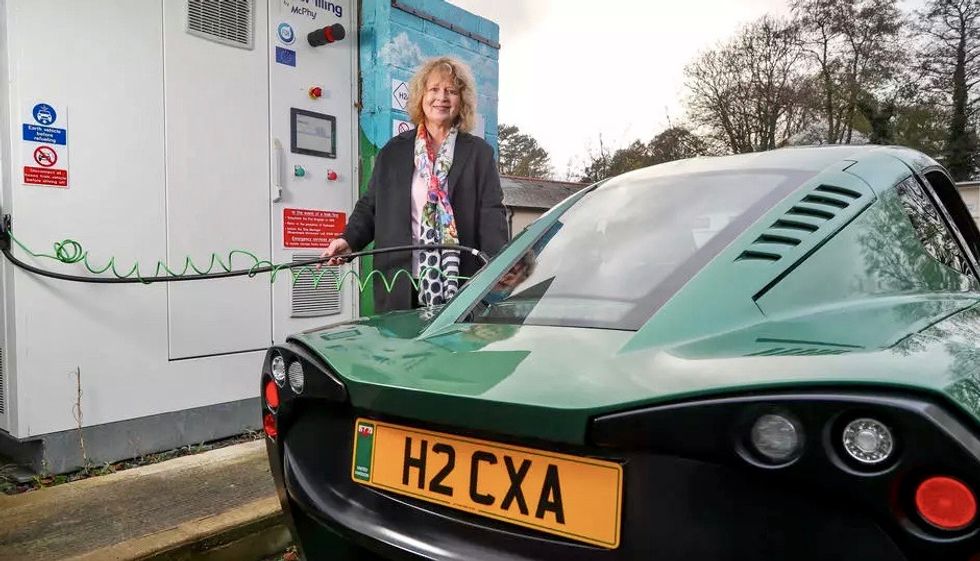 In the battle against climate change, green hydrogen is being hailed as a potential miracle fuel that could help the world's worst-polluting industries slash carbon emissions.

Hydrogen itself may have plenty of uses, but governments and companies are increasingly turning their attention to how to produce the resource in a climate-friendly fashion to make it truly green.

Hydrogen is an abundant resource that gives off no emissions when it is burnt as fuel. No wonder governments and companies are falling over each other to extol its virtues.

Its use as a fuel for spacecraft has prompted many to tout it as the future of the transport industry. European firm Airbus has said it wants to put the world's first hydrogen-powered commercial plane into service by 2035. Many major automakers already manufacture models using hydrogen fuel cells.

Transport policymakers are taking note. Plans are afoot for hydrogen-powered trains in Germany and Italy.

In famously dirty industries, hydrogen is regarded as a particularly promising alternative to fossil fuels. Steelmakers like Germany's Thyssenkrupp are experimenting with creating hydrogen-powered furnaces.

A broad agreement exists that hydrogen fuel has huge potential benefits, but the process of creating it is still the subject of heated debate.

Scientists have understood for centuries how hydrogen can be produced from water via a process known as electrolysis whereby an electric current is passed through water, splitting it into hydrogen and oxygen.

But this process requires power -- which right now is still generated largely by burning coal and gas.

According to the International Energy Agency, global hydrogen production emitted 830 million tonnes of CO2 in 2017 -- the equivalent of the combined emissions of Indonesia and the United Kingdom.

Governments and companies are mulling three main options to make the process cleaner.

The first is "green hydrogen", which uses electrolysis of water powered by renewable energy. This would reduce emissions but it remains very costly.

The second option is to obtain so-called blue hydrogen from natural gas, capturing the CO2 during the process. Firms including ExxonMobil and ENI are pushing for this, but the CO2 sequestration process remains uncertain and costly.

The third option is low-carbon hydrogen produced by electrolysis but using nuclear electricity. China is the main proponent of this method, with nuclear energy falling out of favour elsewhere in the world.

Governments are scrambling to frame policies encouraging the development of clean hydrogen.

The EU wants to achieve between 12 and 14 percent hydrogen in its energy mix by 2050, up from two percent today. The bloc estimates the required funding at between 180 billion euros ($218 billion) and 470 billion.

The Netherlands, Portugal, Germany, and France have all published hydrogen strategies over the past year. Germany has earmarked 9 billion euros for green hydrogen. The Netherlands is planning a "Hydrogen Valley".

China is already a world leader in hydrogen technology, with Australia, Japan, South Korea and the United States also pushing for a slice of the hydrogen revolution.

Climate activists are urging countries to keep their feet on the ground about hydrogen.

"Not all strategies focus exclusively on green hydrogen, some include hydrogen production from coal, gas, and nuclear," wrote the Climate Transparency group in a report in November.

"Nevertheless, developing hydrogen strategies and infrastructure is a positive step towards zero-carbon hydrogen."

The falling prices of solar and wind energy and the increasing use of hydrogen could see its production costs slashed by 2050, according to researchers BloombergNEF.

"Hydrogen can make a real contribution to the fight against climate change, but only if it is used properly, in areas where you have no other choices to reduce emissions," says Nicolas Berghmans at IDDRI, a think tank that focuses on sustainable development.

He said that hydrogen, no matter how it is produced, can only achieve a limited amount. He said it must be part of a broader global energy policy that also acts to reduce consumption.