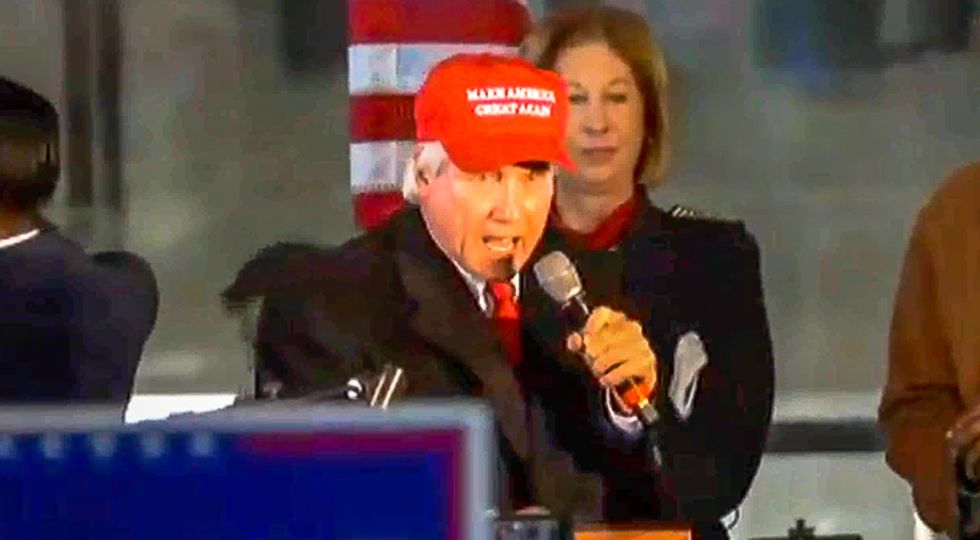 An attorney who says he is representing President Donald Trump encouraged a group of angry supporters to target Gov. Brian Kemp (R) at a "Stop the Steal" rally in Georgia on Wednesday.

"We're going to send them a message!" Lin Wood shouted, referring to Georgia officials. "And the message is this. It's 1776 in America again! And you're not going to take our freedom. We're going to fight for our liberty!"

"This is America! You picked a fight with the wrong people," he continued. "Get out of our country, George Soros! We are not going to allow ourselves to go back into the polling booth -- and you hear us out, Gov. Kemp, you hear me."

"I believe that a great man one time called upon the Black Americans to take action," Wood said. "Martin Luther King, Jr. believed in non-violent civil disobedience. I want you to go to the governor's mansion, I want you to circle it, I want you to blow your horns until Brian Kemp comes out and orders a special session of the Georgia Legislature. Get us our legislature! And we want him to fix the mess that he created!"

"And then he can resign. And then as far as I'm concerned, lock him up!" he shouted, prompting the crowd to chant, "Lock him up! Lock him up!"

In recent days, Georgia election officials have worried that President Donald Trump and his supporters could incite violence in the state.