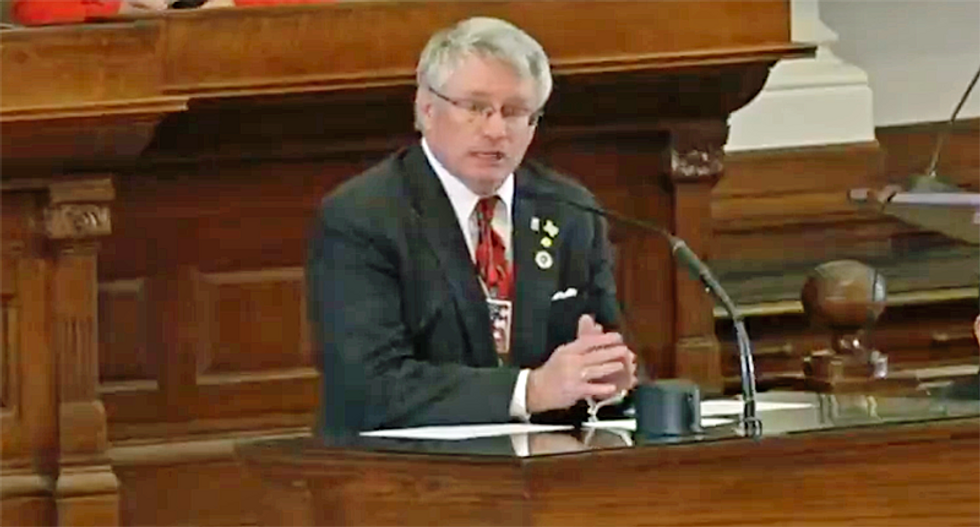 A video that shows a Texas Republican elector and State Republican Executive Committee official spinning a blatantly false tale is going viral on social media, with outraged conservatives insisting it is proof the U.S. Supreme Court, and especially Chief Justice John Roberts, are compromised. Some are even calling for the Chief Justice to be arrested.

GOP presidential elector Matt Patrick of Dallas, who cast his vote for President Donald Trump on Monday at the Texas State House, also took to the floor and delivered an easily-debunked fake news story about why, he says, the U.S. Supreme Court unanimously rejected Texas Attorney General Ken Paxton's frivolous lawsuit – joined by 17 other state attorneys general and 126 Republican members of Congress.

Had it been successful that lawsuit would have voided the votes of voters in four battleground states that Joe Biden won.

Remember, all nine justices said they would have voted against the case had they taken it, but they refused to hear in for lack of standing.

Before you listen to Matt Patrick's speech, know that conservative attorney Ed Whelan – who clerked for Justice Antonin Scalia, is the President of the right wing Ethics and Public Policy Center think tank, was deputy assistant attorney general under President George W. Bush, and is a National Review contributor – totally debunked Patrick's claims as "an absurd fantasy."

Patrick's entire story focuses on a supposed meeting the nine justices had in a "closed room" with no computers or phones at the Supreme Court to debate whether or not to take the Texas case.

As several experts have noted, the Supreme Court justices have not met in person in months, due to the coronavirus pandemic.

Patrick refers to a report he claims to have read "online," describing it as something that "was written by someone who was a current staffer for one of the current Supreme Court justices," he says in the C-SPAN video also posted to Twitter by producer Howard Mortman:

"I’ll just describe for you the report that I read, and you can make of it what you will," Patrick tells the Texas group of electors. "He said that the justices, as they always do, went into a closed room to discuss cases they're taking or do debate. There’s no phones, no computers, no nothing. No one else is in the room except for the nine justices. It’s typically very civil. They usually don’t hear any sound, they just debate what they are doing. But when the Texas case was brought up, he said he heard screaming through the walls, as Justice Roberts and the other liberal justices were insisting that this case not be taken up."

"And the reason – the words that were heard through the wall when Justice Thomas and Justice Alito were citing Bush vs. Gore, from John Roberts were, 'I don’t give a ____ about that case, I don’t want to hear about it. At that time, we didn’t have riots.'"

"So what he was saying was that he was afraid of what would happen if they did the right thing. And I’m sorry, but that is moral cowardice. And we in the SREC [State Republican Executive Committee], I am an SREC member, we put those words in there very specifically because the charge of the Supreme Court is to ultimately be our final arbitrator, our final line of defense for right and wrong, and they did not do their duty. So I think we should leave these words in because I want to send a strong message to them.

(It's unclear what "words" he's referring to, but immaterial to his false story.)

@HowardMortman Of course they did not meet in person. This is not just delusional. It is flat out lies.
— Norman Ornstein (@Norman Ornstein) 1608245891.0

Here's a conservative going ballistic, rather than checking Patrick's absurd story. This is Dan Gainor, who works for a right wing media "watchdog" yet can't fact check this speech:

Of course the story is now showing up in right wing media, again, because they can't bother to fact-check:

Under pressure to respond forcefully to the Supreme Court's decision to strike down Roe v. Wade, Vice President Kamala Harris on Monday said the White House is not currently discussing the idea of using federal property to ensure access to abortion services for those living in states that have banned or are moving to ban the procedure.

Asked specifically about the proposal during an interview with CNN's Dana Bash, Harris initially dodged the question, saying the Biden administration is looking to "do everything we can to empower women to not only seek but to receive the care where it is available."

Former Mark Meadows aide Cassidy Hutchinson is expected to testify at a surprise January 6th Committee hearing on Tuesday, which has led to speculation about what new information she could offer that hasn't already been disclosed.

Punchbowl News' Jake Sherman, whose publication first broke news about Hutchinson's testimony, writes on Twitter that viewers should absolutely not buy some of the attacks that Trump allies are planning to lob at her before, during, and after she testifies.