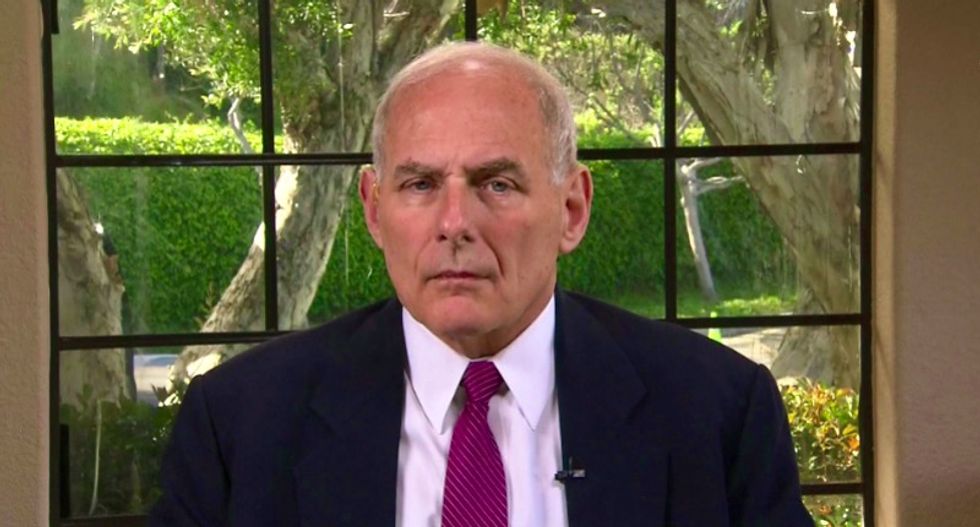 John Kelly, President Donald Trump's former Chief of Staff and Secretary of Homeland Security, is being criticized today after praising the "vast majority" of Trump White House staffers – political appointees who chose to work for this president – as "decent people" who "kept the train from careening off the tracks."

Kelly's remarks are part of what is being called a "reputation laundering" article in The Atlantic for several ex-Trump officials.

Trump White House staffers, Kelly laments, “unfortunately paid quite a price ... in reputation and future employment. They don’t deserve that. They deserve better than that, because they kept the train from careening off the tracks.”

Speaking of reputations, as some have noted, Kelly was instrumental in the Trump child separations policy, oversaw Trump's Muslim ban, expanded Trump's deportations, and called some DACA recipients "too lazy to get off their asses." After exiting the White House he "joined the board of the conglomerate that operates the largest facility for migrant children in the country," the AP reported. "Some members of Congress have described 'prison-like' conditions in the facility in Homestead, Florida."

Kelly was also blasted after it was revealed he claimed immigrants don't "assimilate" or "integrate well."

James McGowan, whose bio says he is a Senior Advisor at the United Nations, offered this salient point:

@waltshaub @AdrienneLaF @JohnJHarwood @PeterAtlantic When you take an appointment offered by an asset of a foreign… https://t.co/WSz36Z3T3k
— James McGowan (@James McGowan) 1608319810

The problem with this is that the enterprise was indecent and the train did careen off the tracks. https://t.co/fn2PTjyh7U
— Ben Rhodes (@Ben Rhodes) 1608319385

Counterpoint: they are morally weak grifters who thought they could suck some personal gain out of a national crisi… https://t.co/vhXu9yyE9r
— David Roberts (@David Roberts) 1608323559

John Kelly was key in instituting and justifying the child-separation policy. After leaving the White House, he bec… https://t.co/u2WApl1dup
— Pé🌻 (@Pé🌻) 1608318881

absolute bullshit and if you fall in line with this you're very stupid. nobody had to work for trump. they all chos… https://t.co/Eh6sBbc5Du
— Oliver Willis (@Oliver Willis) 1608318704

The adults in the room were simultaneously a stabilizing force and, by definition, co-conspirators unfit for rehabi… https://t.co/23W7kKIdcs
— Individual-1 (@Individual-1) 1608319428