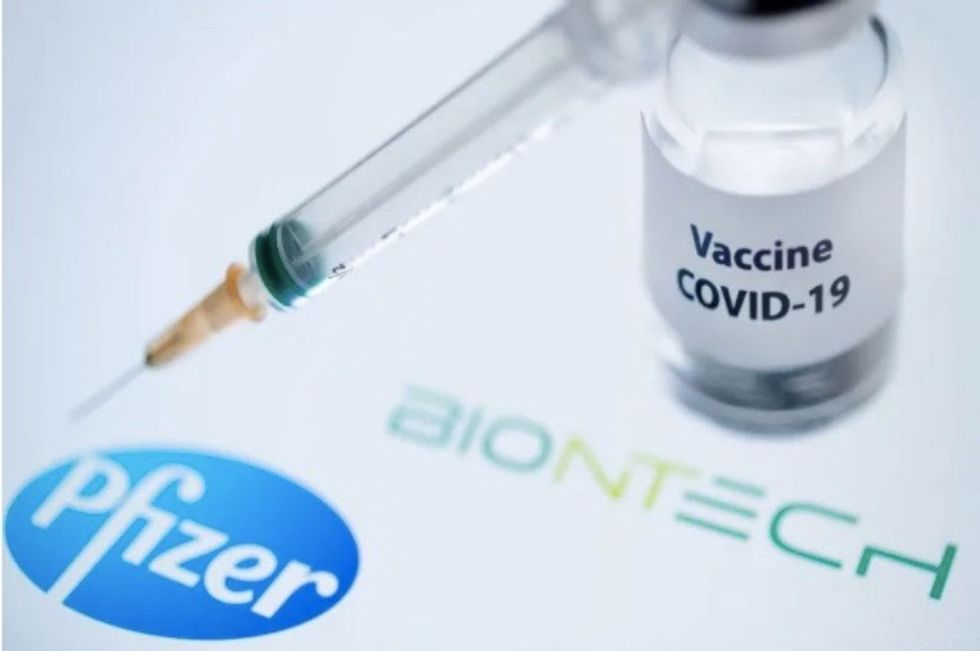 Pharma companies Pfizer and BioNTech on Tuesday filed for European approval for their coronavirus vaccine, following in the footsteps of competitor Moderna, while the OECD predicted the world economy would bounce back to pre-pandemic levels by late 2021.

But the United Nations warned that the pandemic will pitch tens of millions more people into desperate need next year, saying around $35 billion is needed in humanitarian aid.

Companies have been racing to find a treatment for the coronavirus, which has killed almost 1.5 million people and infected over 63 million since it first emerged in China in December last year.

US giant Pfizer and German newcomer BioNTech said their vaccine could be rolled out "in Europe before the end of 2020" if the European Medicines Agency grants so-called Conditional Marketing Authorisation.

Moderna had applied on Monday for both US and EU approval of its vaccine, based on the same new mRNA technology and with a similar level of effectiveness at around 95 percent.

The mRNA (messenger ribonucleic acid) is used to deliver genetic material to the body that makes human cells create a protein from the virus.

This trains the immune system to be ready to attack if it encounters SARS-CoV-2.

On the economic front, the OECD club of wealthy countries said that with anticipated global growth of around 4.2 percent next year, the world should make up almost all the output shortfall suffered in 2020, in large part thanks to "massive policy support" from governments and central banks.

Although growth will return, expansion is predicted to be less evenly distributed around the globe in 2021, with China and India leaping ahead while the US, the eurozone and Japan see only modest gains.

In its annual Global Humanitarian Overview published Tuesday, the United Nations said that the number of people in need of aid would grow 40 percent in 2021 compared with this year, to 235 million people -- or one in 33 worldwide.

"The increase arises almost entirely because of Covid-19," UN emergency relief coordinator Mark Lowcock told reporters, with the report saying the pandemic had tipped those "already living on a knife's edge" into need.

Some 160 million of the most vulnerable people could be helped across 56 countries with the $35 billion the UN is asking for, the report said.

The sum is "actually very small in relation to all of the other challenges we face", Lowcock added.

Day-to-day, wealthier countries remain focused on the back and forth of infection control restrictions, with Ireland ending its second partial lockdown on Tuesday.

As cases are expected to mount as people mingle in the run-up to Christmas, "the challenge is to keep that increase as low as possible," Foreign Minister Simon Coveney told broadcaster RTE.

Across the Irish Sea, British Prime Minister Boris Johnson faces a rebellion in his Conservative ranks over a plan for a county-by-county tiered restriction system to replace an England-wide lockdown, set to end at midnight.

MPs complain that some regions are beng forced into the strictest infection control measures because of isolated clusters of cases, initially placing 23 million people under the toughest "Tier 3" category.

In Germany, which last week hit a million cases, Berlin's legendary KitKat fetish nightclub reopened -- as a coronavirus testing centre rather than a sexually uninhibited haven for fans of partying in leather, latex or in the nude.

"Be wild and come naked! (Please don't. Would be funny, but would probably lead to reports of suspected parties)," said the club, a pillar of Berlin nightlife since 1994.

And in the US, media reported the resignation of Scott Atlas, President Donald Trump's controversial coronavirus advisor.

"Masks work? NO," Atlas had tweeted in October, calling the following month for people in Michigan to "rise up" against Covid-19 measures.

In Sri Lanka, the government freed hundreds of prisoners and said it would release thousands more after a riot sparked by anger over coronavirus cases at one of its many overcrowded jails left nine inmates dead and 113 wounded.

Sri Lanka's prisons house just over 30,000 inmates, nearly three times their capacity, and about 1,200 of them have tested positive for the coronavirus with two deaths.

With only "mild symptoms", the British world champion "is now isolating" and will miss the Sakhir Grand Prix on Saturday, the sport's FIA governing body said.