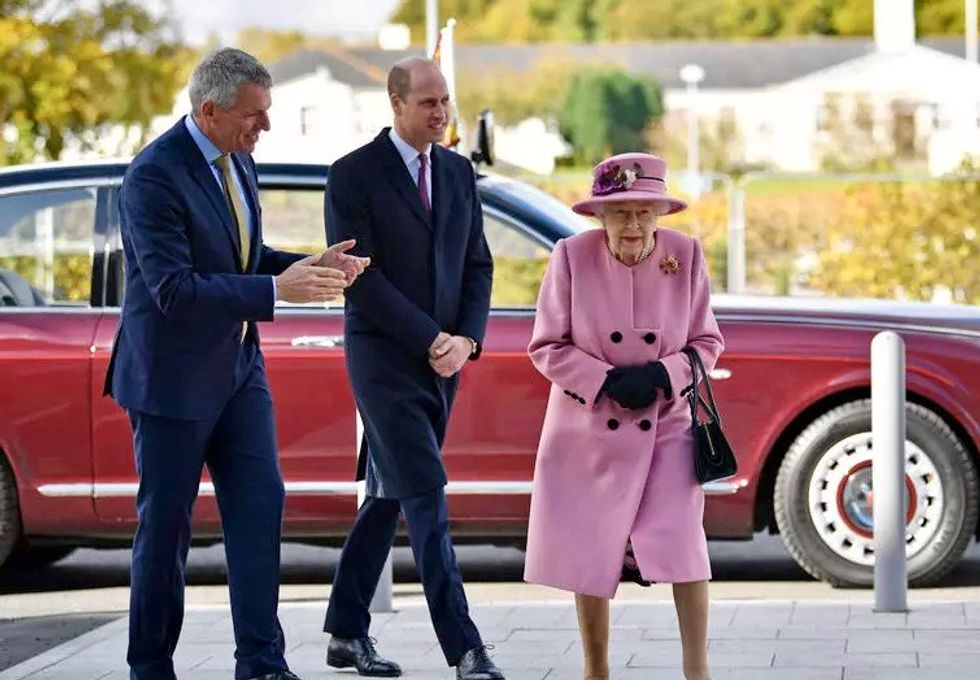 The 94-year-old monarch was accompanied by her grandson Prince William on the visit to the Porton Down complex in southwest England. Ben STANSALL POOL/AFP

The United States notched a record number of coronavirus cases in 24 hours for the third day running, as it was reported that Britain's Queen Elizabeth II will get a vaccine within weeks.

For two weeks, the US has regularly topped 2,000 deaths per day, as it had in the spring at the height of the first wave of the country's outbreak.

US health officials warned of a surge after millions of Americans traveled to celebrate last week's Thanksgiving holiday despite pleas from authorities to stay home.

The coronavirus has now killed more than 1.5 million people and infected 66 million around the world since emerging in China last year, according to a tally from official sources compiled by AFP.

In Britain, it was reported that the 94-year-old monarch will receive the Pfizer-BioNTech coronavirus vaccine within weeks after UK regulators granted emergency approval. The rollout of the vaccine will begin next week.

The queen and her 99-year-old husband Prince Philip are in line to get the jab early due to their age and will not receive preferential treatment, the Mail on Sunday reported.

The newspaper said Britain's most senior royals would reveal they have been given the inoculation "to encourage more people to take up the vital jab", amid fears so-called anti-vaxxers could dent enthusiasm for it.

British health officials are set to use criteria based on age and vulnerability to decide who gets the vaccine first.

Elderly care home residents and their carers will be the very first to get inoculated, followed by those aged 80 and over and frontline health and care staff.

Britain has pre-ordered 40 million doses of the vaccine in total, and is set to receive an initial batch of 800,000 to begin next week's rollout.

The World Health Organization has warned that vaccines are no magic bullet for the coronavirus crisis, as Russia started vaccinating its high-risk workers and other countries geared up for similar programs.

The WHO cautioned against what it said was an erroneous belief that the pandemic would end soon with vaccines on the horizon.

"Vaccines do not equal zero Covid," said WHO emergencies director Michael Ryan, adding that not everyone will be able to receive it early next year.

"Vaccination will add a major, major, powerful tool to the tool kit that we have. But by themselves, they will not do the job."

WHO Director-General Tedros Adhanom Ghebreyesus also cautioned against the "growing perception that the pandemic is over" with the virus still spreading fast, putting enormous pressure on hospitals and health workers.

Health officials in Moscow said they had opened 70 coronavirus vaccine centers in the Russian capital that would initially offer jabs for health, education and social workers.

The WHO says 51 candidate vaccines are currently being tested on humans, with 13 reaching final-stage mass testing.

The United States is expected to give a green light to vaccines later this month, while Belgium, France and Spain have said jabs will begin in January for the most vulnerable.

South Korea raised its coronavirus alert to the second-highest level in Seoul and surrounding areas Sunday after new infections jumped from around 100 a day to more than 500 in recent weeks.

All gatherings of more than 50 people will be banned and professional sports will be held behind closed doors with no spectators.

Cafes will continue to serve only takeaways, while restaurants must close by 9 pm, with only deliveries permitted afterwards. The tightened measures will be in place until the end of the year.

Italy is seeing a dramatic resurgence of infections after it largely tamped down an earlier outbreak by enforcing a strict lockdown, while Latin America and the Caribbean region have seen an 18 percent spike in cases in a week.

Other countries will also see holiday restrictions, with Switzerland banning Christmas caroling in the streets and Madrid canceling most New Year events in the city center.

Portugal's second wave has begun to subside, but authorities said they decided to keep restrictions in force so they can be relaxed over the festive period.