‘The grift is on, baby’: Ex-GOP chair slams Trump’s post-election donors as ‘suckers’ 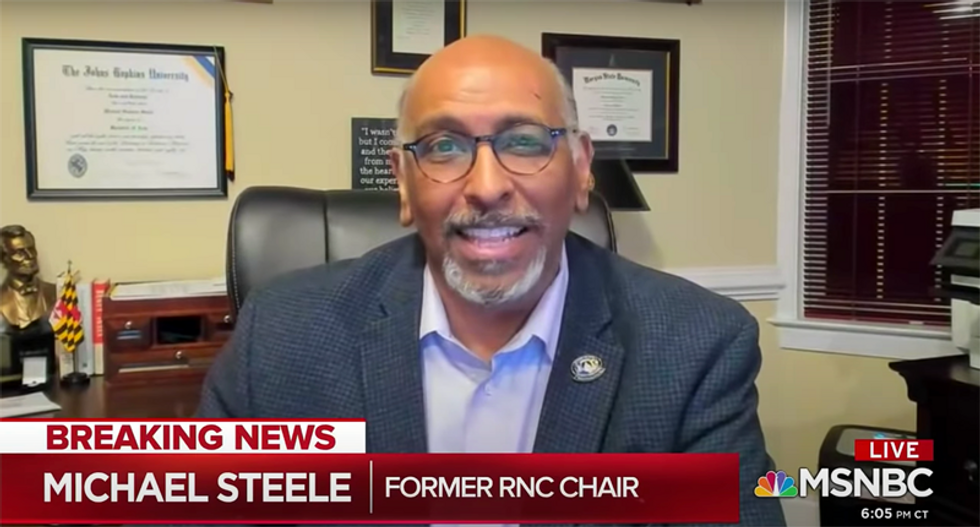 Although President-elect Joe Biden enjoyed a decisive victory over President Donald Trump in the 2020 election — winning 306 electoral votes and defeating Trump by more than 6 million in the popular vote — the outgoing president continues to receive millions of dollars in donations. And former Republican National Committee Chair Michael Steele, during an MSNBC appearance on December 2, slammed Trump's post-election donors as "suckers."

Claiming, with zero evidence, that he is the real winner of the 2020 presidential election and that he was the victim of widespread voter fraud, Trump has brought in a whopping $170 million for his so-called Election Defense Fund. And according to CNN's Brianna Keilar, 75% of those donations are being shared with a new leadership PAC called the Save America PAC — which Keilar has denounced as a "slush fund."

Appearing on MSNBC's "The ReidOut," Steele told host Joy Reid that Trump's post-election donors are "suckers" if they honestly believe their donations will keep Trump in the White House after January 20.

Steele, a Never Trumper, told Reid, "The great little dirty part of this is Donald Trump, right now, Joy, is raising money at a faster rate to, sort of, steal the election than he did when he was trying to win the election. And that's what people need to understand, alright? He's raising more money now than he did when he was actually running for the job that he's now trying to say that they stole from him. So, look, the grift is on, baby. It is just on. You need to understand it."

In 2009, Steele became the first African-American to chair the RNC — and he remained in that position until 2011. Steele, who is conservative but not an extremist, supported GOP presidential nominee Mitt Romney in 2012. But he has been a vehement critic of Trump and has been active in the Lincoln Project, a right-wing anti-Trump group.

Steele told Reid that if Trump's supporters want to donate money to him, that's up to them — but they need to realize what their donations are actually being used for.

"It ain't going into his recount," Steele told Reid. "It's going into his PAC. And that PAC money — and this is important — allows him to go out and do political stuff unrelated to the recount. If you all want to give him the money, that's on you. But know what it's going to."