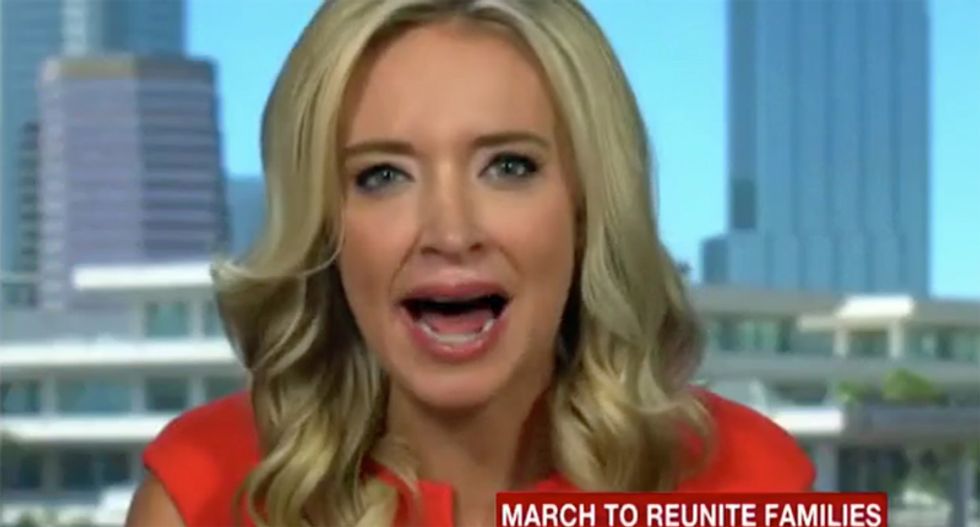 Kayleigh McEnany is outraged. Again. After reading a Glamour Q&A with an incoming deputy for President-elect Joe Biden, the White House press secretary is lashing out.

In an interview with the fashion magazine, Jen O'Malley Dillon said one thing, and predictably the right is twisting it into something else.

“The president-elect was able to connect with people over this sense of unity,” O’Malley Dillon said. “In the primary, people would mock him, like, ‘You think you can work with Republicans?’ I’m not saying they’re not a bunch of f*ckers. Mitch McConnell is terrible. But this sense that you couldn’t wish for that, you couldn’t wish for this bipartisan ideal? He rejected that."

As a former prosecutor explained, those with the greatest amount of outreach weren't likely to work with Biden to begin with.

“We will not see diseases like the coronavirus come here," she told Fox News at one point. "And isn’t it refreshing when contrasting it with the awful presidency of President Obama?”

It prompted many to call McEnany out, among other things.

Can someone tell Kayleigh McEnazi that whining on Twitter about being called a fucker takes precious time away from… https://t.co/PFzptohfdw
— Ricky Davila (@Ricky Davila) 1608236211.0

@kayleighmcenany Kayleigh, over 80 million people think you and your boss are fuckers. Just sayin'
— Roy_Machado (@Roy_Machado) 1608239023.0

@kayleighmcenany Why, yes Kayleigh. You ARE a bunch of deplorable fuckers, and you fuckers revel in acting like fuc… https://t.co/rWsznvSKpw
— Neil Kaplan (@Neil Kaplan) 1608238580.0

@kayleighmcenany When you try to fuck with the Constitution and Democracy, it is accurate to call you fuckers. Jus… https://t.co/d6tjwKA4hu
— Rick Williams (@Rick Williams) 1608238191.0