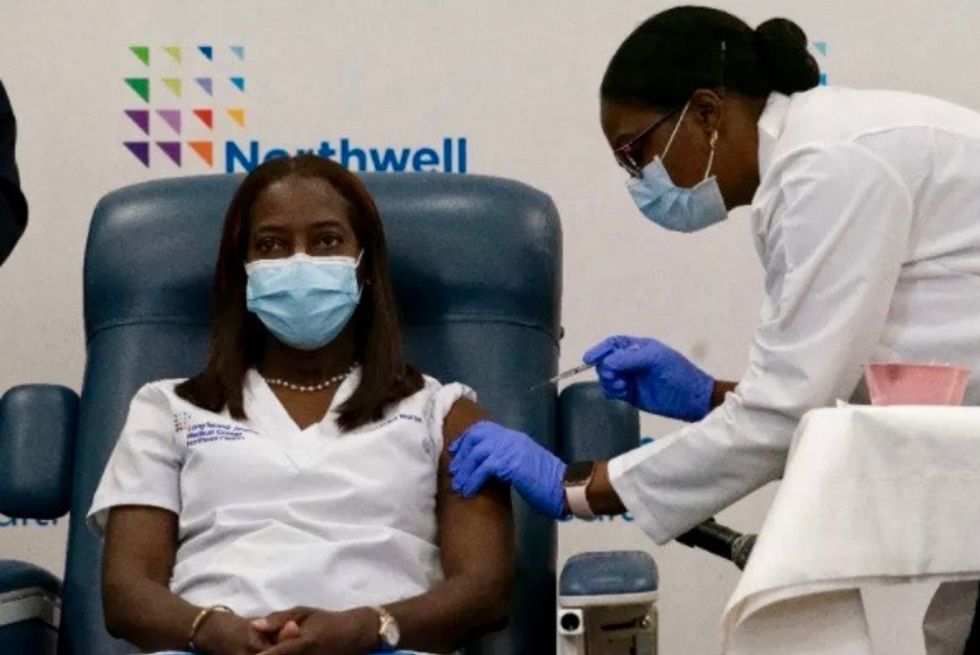 Sandra Lindsay(L), a nurse at Long Island Jewish Medical Center, became the first person in the US to receive the COVID-19 vaccine (AFP)

The first Americans to receive the coronavirus vaccine, live on television, were Black caregivers, optics that illustrate a daunting challenge facing the nationwide campaign: persuading skeptical African Americans to get inoculated.

In the United States, Black people -- and Latinos -- are almost three times more likely to die from Covid-19 then whites, according to the Centers for Disease Prevention (CDC), due to economic disparities.

But surveys show African Americans are also among those most reluctant to get vaccinated, something experts attribute to medical experiments that were conducted during the eras of slavery and segregation.

"I don't feel that I was picked out or targeted. I don't feel like I've been used," critical care nurse Sandra Lindsay, who was the first American to be vaccinated on Monday.

"We've been heavily affected, and so I encourage everyone that looks like me, everyone around the world, to take the vaccine," added Lindsay after receiving the shot from doctor Michelle Chester, who is also Black.

The second American to be vaccinated, Yves Duroseau, an emergency doctor, also directly implored his fellow Black Americans to get immunized.

Distrust of the vaccine has declined: some 60 percent of Americans questioned in November said they would definitely or probably get vaccinated, up from 51 percent in September, according to a Pew Research Center survey.

However, only 42 percent of Black people surveyed said they would get inoculated.

A study published on Tuesday by the Kaiser Family Foundation, a non-profit specializing in health, found that while confidence in the vaccine is growing, Black Americans are more skeptical than the rest of the population.

Thirty-five percent of Black adults said they would not get vaccinated, compared to 27 percent for Americans in general, according to the survey.

Experts say the reluctance is understandable given America's history of conducting medical experiments on Black people. Among the most notorious were in Tuskegee, Alabama between 1932 and 1972, when Black men were unwittingly used to study the effects of syphilis.

In 2018, a statue of 19th-century American physician James Marion Sims, considered the father of modern gynaecology, was removed from New York's Central Park because of experiments he had conducted on slaves.

"A lot of (skepticism) is based on distrust and based on historical experiences many of these groups have experienced," said Marcus Plescia, chief medical examiner for the Association of State and Territorial Health Officials (ASTHO).

"They are not anti-vaxxers, they are vaccine-hesitant. We need to find ways to reach them and build that trust," he added, saying showing Black people on TV getting the country's first vaccinations is "probably a good strategy."

A US government-run national outreach campaign targeting reluctant citizens, such as minorities, is also due to begin this week.

Dr Lisa Fitzpatrick, a member of the Black Coalition Against Covid-19 and a specialist in public health campaigns, is fighting vaccine suspicions on the streets of Washington, DC.

"Whether it's in the clinic or right here on the street, people (are) telling me why they're distrustful. And it's understandable, because of the history of injustice against Black people and brown people in this country," she told AFP.

Last week, Fitzpatrick managed to dispel the doubts of Angelo Boone, a 61-year-old street cleaner who walked past the table the doctor had set up near Congress.

"I got to understand about how the trial went and certain things," said Boone. "So she kind of won me over. I think I'm going to take it."