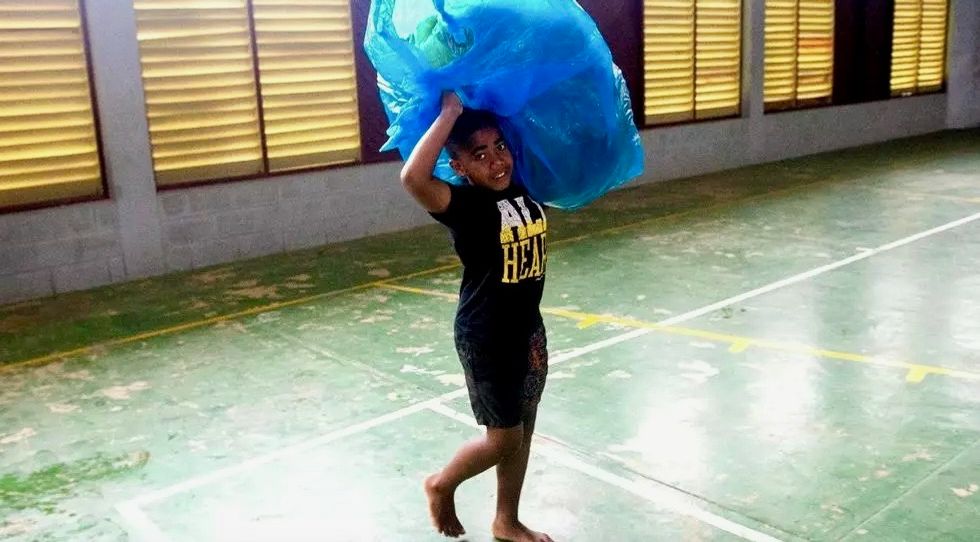 A Fijian boy carries a bag to a temporary shelter to avoid strong damaging winds from super cyclone Yasa in the capital city of Suva on December 17, 2020 Leon LORD AFP

Super cyclone Yasa flattened entire villages as it tore through Fiji, but there were no initial reports of casualties, aid agencies in the Pacific island nation said Friday.

The eye of the slow-moving cyclone took about four hours to gouge its way across the island, triggering floods, landslides and blackouts before moving out to sea early Friday.

"There's quite a few villages that are reporting that all homes have been destroyed," Save the Children's Fiji chief Shairana Ali told AFP.

"Schools have been damaged and roofs blown away, but so far we haven't had any reports of casualties or injuries."

Yasa is one of the most powerful storms recorded in Fiji, and there were fears it would have the same devastating impact as Cyclone Winston in 2016, which killed 44 people and destroyed tens of thousands of homes.

But Yasa landed in the sparsely populated Bau province, and Ali said it appeared there was no major damage in large towns, except for flooding in Rakiraki on the main island of Viti Levu.

"Having said that, the situation might change because the areas affected are quite remote and there are still some small islands in the direct path of the cyclone," Ali said.

"The weather's still not good but aerial assessments will hopefully be done later today and teams deployed on the ground when the seas are not so rough for the boats to reach the island."

- 'Not built to withstand' the storm -

Ali also said there were "significant numbers" of people in evacuation centres, but precise details would not be available until damage assessments were complete.

"In these remote areas, houses are not built to withstand Category Five cyclones, so a lot of people have lost their homes," she said.

"Most of these people rely on farming for their livelihood and their crops have been destroyed as well."

Authorities have been issuing dire warnings about the danger posed by the cyclone for most of the week, urging people to shelter in solid structure and flee to higher ground if they live on the coast.

A state of natural disaster was declared on Thursday, giving emergency services sweeping powers to impose curfews and movement restrictions for the next 30 days.

Aid agencies have pre-positioned supplies across the country in anticipation of a major disaster during cyclone season, which runs until May.

Fijian Prime Minister Frank Bainimarama, a long-time campaigner for climate action, blamed global warming for such super storms, which were once rare but have become relatively common.

"This is not normal. This is a climate emergency," he tweeted.

The most recent Category Five storm to hit Fiji was Cyclone Harold, which killed 31 people as it tore through the Solomon Islands, Vanuatu, Fiji and Tonga in April this year.