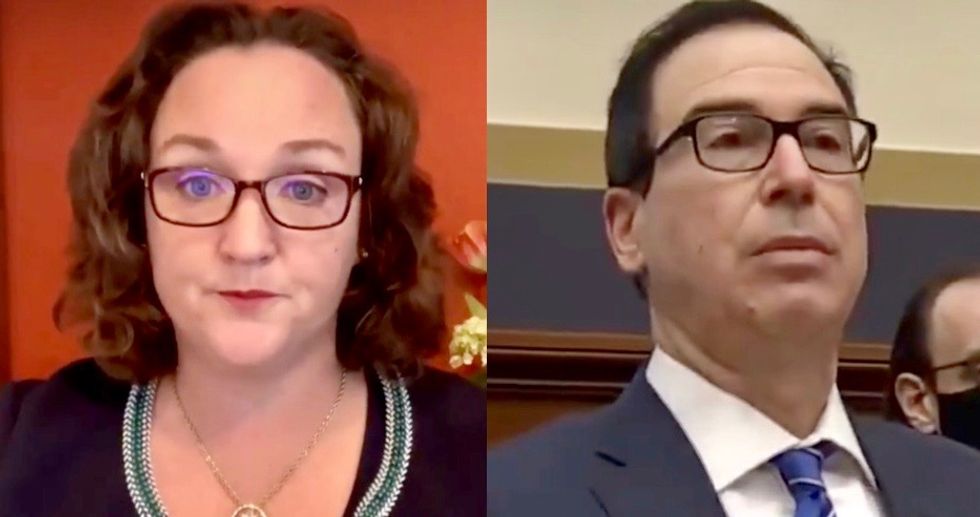 U.S. Rep. Katie Porter (D-CA) questioned Treasury Secretary Steve Mnuchin over coronavirus funds on Wednesday. It did not go well for him.

Secretary Mnuchin is trying to return hundreds of billions of dollars Congress approved to address the COVID-19 crisis back to the Treasury's general fund – which means states could no longer use those desperately-needed funds.

But Congresswoman Porter had to force the Treasury Secretary to admit that the law does not call for him to do so.

As usual, Mnuchin was condescending and dismissive of the duly-elected Democratic member of Congress, and even called her question "ridiculous" and a "waste" of time.

Porter began by telling the Treasury Secretary, "I'm reading aloud now from Section 4027 of the Cares Act. 'On or after January 2026 any funds that are remaining shall be transferred to the general fund." In other words, set, sent back to the Treasury. Secretary Mnuchin, is it currently the year 2026, yes or no?"

Mnuchin didn't answer the question but accused Rep. Porter of "putting words in my mouth."

After a heated back-and-forth Mnuchin answered, snidely, "Of course it's not 2026. It's ridiculous to ask me that question and waste our time."

"Well, Secretary Mnuchin, I think it's ridiculous that you're play acting to be a lawyer.

"I have plenty of lawyers at the Department of Treasury who advise me," he said, then misogynistically replied he would explain to Federal Reserve Chairman Jerome Powell, seated beside him, "all the legal provisions" of the law.

Porter was not having it and took control again of the hearing.