A black hole dubbed 'the Unicorn' may be galaxy's smallest one 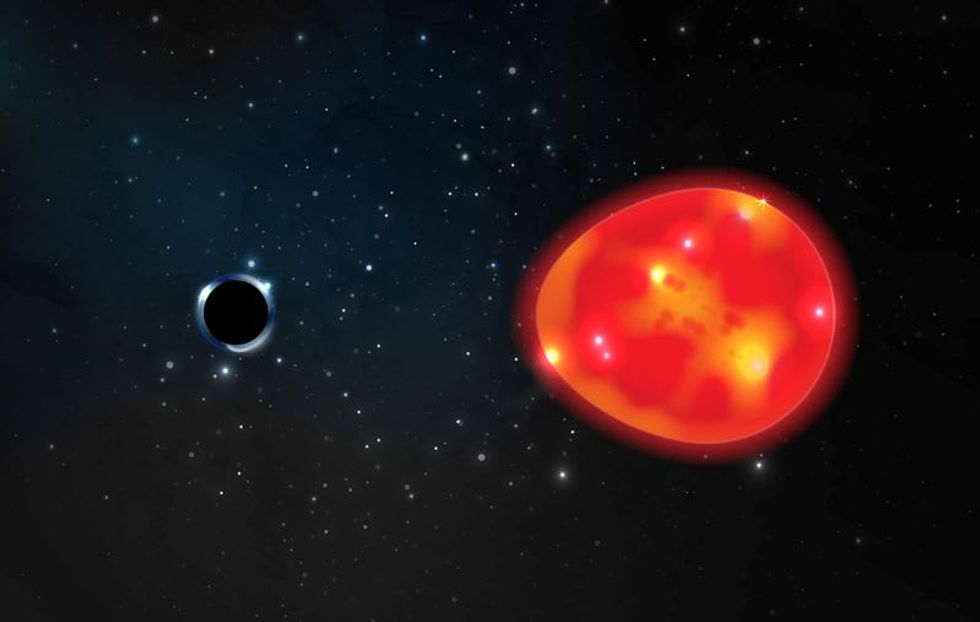 WASHINGTON (Reuters) - Scientists have discovered what may be the smallest-known black hole in the Milky Way galaxy and the closest to our solar system - an object so curious that they nicknamed it 'the Unicorn.'

The researchers said the black hole is roughly three times the mass of our sun, testing the lower limits of size for these extraordinarily dense objects that possess gravitational pulls so strong not even light can escape. A luminous star called a red giant orbits with the black hole in a so-called binary star system named V723 Mon.

The black hole is located about 1,500 light years - the distance light travels in a year, 5.9 trillion miles (9.5 trillion km) - from Earth. While it may be the closest one to us, it is still far away. By way of comparison, the closest star to our solar system, Proxima Centauri, is 4 light years away.

Black holes like this one form when massive stars die and their cores collapse.

"We nicknamed this black hole 'the Unicorn' partly because V723 Mon is in the Monoceros constellation - which translates to unicorn - and partly because it is a very unique system" in terms of the black hole's mass and relative closeness to Earth, said Ohio State University astronomy doctoral student Tharindu Jayasinghe, lead author of the study published this week in the journal Monthly Notices of the Royal Astronomical Society.

There are three categories of black holes. The smallest, like 'the Unicorn,' are so-called stellar mass black holes formed by the gravitational collapse of a single star. There are gargantuan 'supermassive' black holes like the one at our galaxy's center, 26,000 light years from Earth, which is four million times the sun's mass. A few intermediate-mass black holes also have been found with masses somewhere in between.

"It is clear that nature makes black holes of a wide range of masses. But a three-solar-mass black hole is a big surprise. There are no very good models for how to make such a black hole, but I am sure people will work on that more now," said Ohio State University astronomy professor and study co-author Kris Stanek.

'The Unicorn' falls into what the researchers called a "mass gap" between the largest-known neutron stars - objects similarly formed by a large star's collapse - at around 2.2 times the mass of our sun and what previously had been considered the smallest black holes at around five times the sun's mass.

"'The unicorn' is truly one of the smallest black holes possible," Jayasinghe said.

Its strong gravity alters the shape of its companion star in a phenomenon known as tidal distortion, making it elongated rather than spherical and causing its light to change as it moves along its orbital path. It was these effects on the companion star, observed using Earth-based and orbiting telescopes, that indicated the black hole's presence.

"Black holes are electromagnetically dark, and so they are difficult to find," Jayasinghe said.

Unlike some other black holes orbiting with a star, this one was not observed to be drawing material from its companion, which is 173 times more luminous than our sun.

The only smaller potential black hole is one with a mass 2.6 times that of our sun that was spotted in another galaxy, Jayasinghe said.

Another team of scientists last year described a black hole roughly 1,000 light years from Earth, but other researchers have questioned whether it is a black hole.

(Reporting by Will Dunham; Editing by Rosalba O'Brien)