A botched ransom attempt? Ambassador's death in Congo may not be what it seemed 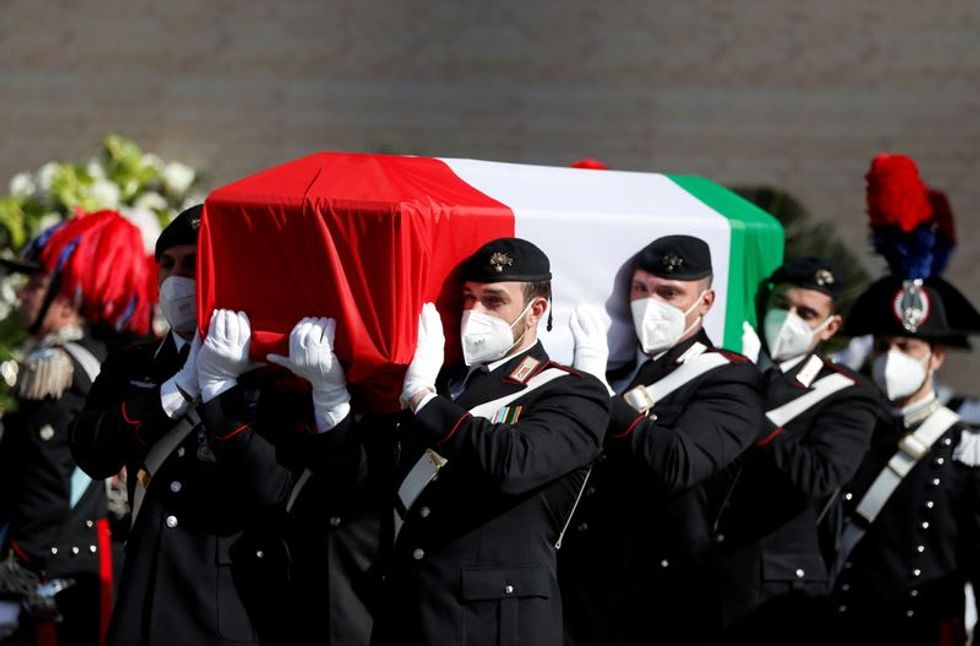 GOMA, Democratic Republic of Congo (Reuters) - At around 10:00 a.m. on Feb. 22, seven men, some armed, stepped onto a road in eastern Congo and forced two cars belonging to the United Nations World Food Programme to stop.

Several minutes of heavy gunfire alerted a group of conservation rangers guarding workers on the scrubby slope above.

The attackers left the road with their captives and walked up the open hillside straight towards the rangers, well known as the country's best-trained fighters.

When the group was around 100 metres away, the rangers fired warning shots, sparking a three-minute skirmish. The attackers fled, leaving Italy's ambassador to the Democratic Republic of Congo, Luca Attanasio, mortally wounded and his bodyguard dead.

This account of the botched kidnapping, corroborated by three U.N. officials and an Italian judicial source - all with knowledge of probes into the attack - appears in an incident report by the Virunga National Park Rangers, seen by Reuters.

Previously unreported, it paints a picture of a poorly planned, clumsily executed act, and runs counter to the assumption among some officials and media at the time that Attanasio was the target of a carefully orchestrated operation.

The attackers never displayed awareness of ambassador Attanasio's identity or diplomatic status, two of the U.N. sources close to the investigations said.

While much of eastern Congo has been beset by violence in recent decades as rival militias fight government troops and each other for control of land and resources, attacks on aid convoys have been relatively rare.

The WFP said criminal activity combined with political instability has had an impact on its capacity to deliver assistance in eastern Congo in the last decade.

It expects all parties to abide by humanitarian principles "that are central to establishing and maintaining access to affected people," WFP said in an emailed statement to Reuters.

Last year, 42 aid workers were kidnapped in eastern Congo, an increase of 35% on 2019, making Congo the second most dangerous country to be an humanitarian, according to data from the International NGO Safety Organisation.

"Kidnappings can go for as little as $100, up to several thousand for humanitarians. I think that's the reason they are targeted more and more," said Pierre Boisselet from KST, a research initiative that maps unrest in the region.

In an area awash with weapons, Attanasio's death appears to be a high-profile illustration of how humanitarians are becoming fair game for profit, alongside gold, charcoal and tin.

"Given the size of the group and the way in which the group carried out the attack, it is likely that kidnapping was their motive rather than a deliberate attack against the Italian ambassador," said an incident report by risk assessment firm Intelligence Fusion.

The military prosecutor for North Kivu, the province where the attack took place, declined to comment on details of an ongoing investigation.

The government did not respond to a request for comment.

The rangers said they were not at liberty to comment on an ongoing investigation and the Italian foreign ministry declined to provide an update about the killing.

The attack on an aid convoy occurred in a country where people are heavily reliant on humanitarian support.

Conflicts, disease, underdevelopment and natural disasters mean an estimated 5.2 million people are displaced in Congo, and 19.6 million need humanitarian assistance and protection in 2021, according to the United Nations.

At around 09:00 that February morning, two white WFP-branded 4x4s left the regional capital Goma on the N2 road northeast to Rutshuru some two hours away, carrying the ambassador, his bodyguard and five WFP staff, WFP said.

An important transport artery in the region, the road did not require U.N. agencies to use armed escorts, according to a designation by the U.N. Department for Safety and Security.

The vehicles climbed the hill out of the city, skirting the eastern foothills of Mount Nyiragongo and the boundary of Virunga National Park, home to an array of rival militias.

Since the invasion of eastern Congo by Rwanda-backed rebels in 1996, the fight over land and communities has evolved into a way of life, with armed outfits splitting and re-mixing in a mosaic of 120 groups across the mineral-rich region.

Meanwhile, the number of people kidnapped for ransom in Nyiragongo sector, the area where the WFP convoy was stopped, has more than doubled to 28 in the last year, according to data collected by the Kivu Security Tracker.

The spike is aided by the rise of mobile phone banking to quickly and easily pay ransoms, said Onesphore Sematumba, a researcher with the International Crisis Group.

"Before it was very risky, people had to hand over money like in a film. Now they just send the money instantly by phone."

INTO THE LONG GRASS

The attackers set their trap next to the village of Kibumba in a dip in the road around one kilometre from thick forest that would offer them cover, according to a map of the area included in the rangers' report and two people who visited the site.

A kilometre further along, the thick undergrowth reaches the road. They also stopped the convoy just 250 metres away from a checkpoint manned by a Congolese army battalion.

Carrying four Kalashnikov-type weapons and two machetes between them, the assailants ordered the seven men out of the cars, three U.N. sources said.

"Give me money!" they shouted in French, while snatching the group's mobile phones and disarming Attanasio's Italian bodyguard, 30-year-old Vittorio Iacovacci, said a U.N. security analyst who interviewed the survivors.

One attacker let off a volley of warning shots, lost control of the weapon and hit WFP driver Mustapha Milambo in the neck, according to the U.N. analyst, who declined to be named. Milambo later died.

The kidnappers continued firing in the air as they herded the remaining captives off the road.

The group cut across the lava field towards the forest, but the ground was relatively open, leaving them exposed. Up the hill, eight rangers listened as the gunfire approached.

Shooting between the attackers and rangers broke out lasting about three minutes followed by silence, according to the rangers' report.

In the melee, Iacovacci tried to evacuate the ambassador out of line of fire, said an Italian judicial and foreign ministry source.

Low on ammunition and with at least one member wounded, the attackers eventually fled, the U.N. security analyst and a second U.N. source said.

Iacovacci and the ambassador were deliberately shot by the hostages before fleeing, one survivor told the rangers. Iacovacci died on the spot.

Some minutes later, three rangers approached the source of the gunfire and shouted for anybody present to put their hands up.

Photographs shared on social media showed an ashen-faced Attanasio being driven away from the scene in the arms of WFP security officer Mansour Rwagaza some minutes later.

He was taken to a U.N. base on the outskirts of Goma, and transferred to a U.N. hospital in the city where he was declared dead, becoming Italy's first ambassador to be killed on mission.

Shortly after the attack, Congo's presidency said "irrefutable preliminary elements confirm the thesis of a terrorist attack by the (Democratic Forces for the Liberation of Rwanda)", a rebel group active in the area.

The FDLR said it was not involved in what it called a "cowardly assassination".