A dark past clouds COVID vaccine for African Americans 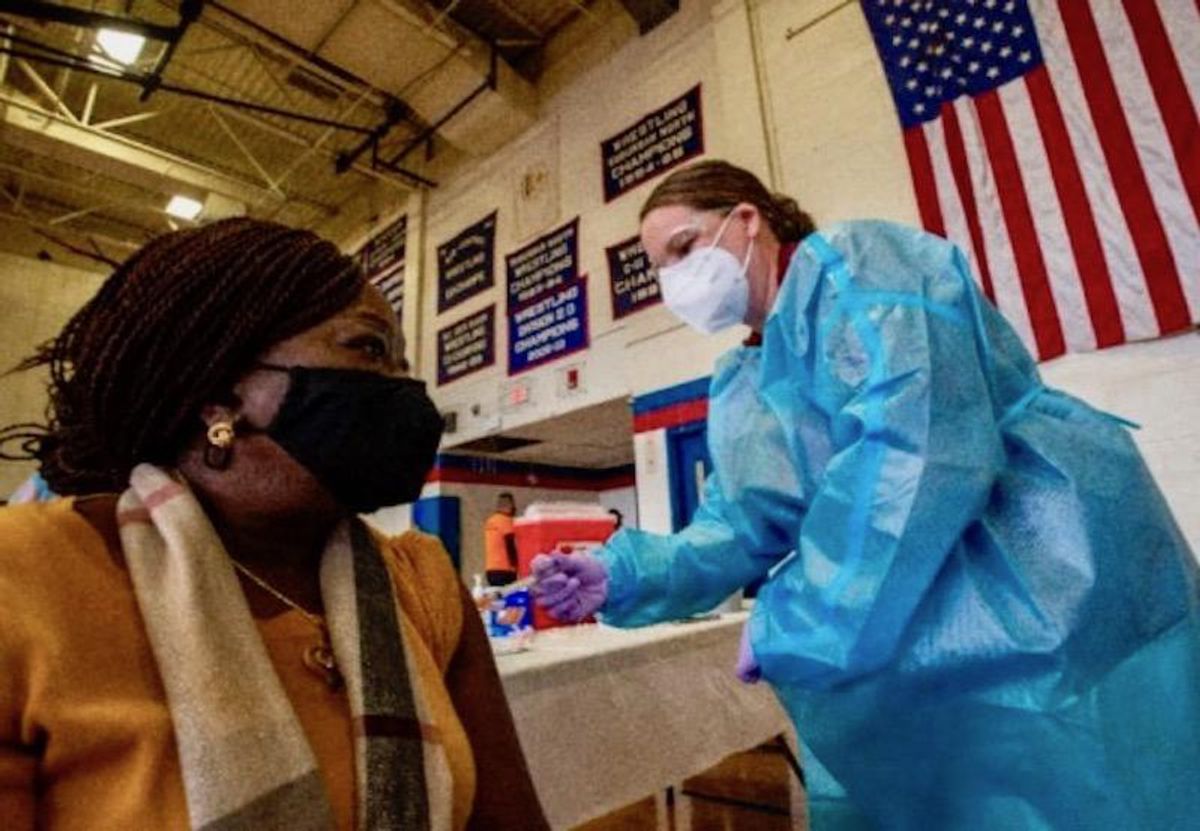 Doris Norman gets the Covid-19 vaccine in the United States, where minorities have died from the virus at higher rates than whites(AFP)

Gary Jackson doesn't want the Covid vaccine even though the virus kills Black people at a starkly higher rate -- a daunting problem experts say the United States must confront in controlling its disastrous outbreak.

By some measures, African Americans have died from coronavirus at the highest rate of any group in the country. Yet they are also the most skeptical of getting the new vaccines, which have been shown to be safe and effective in trials.

It is a dangerous situation with roots in racism and broken trust, but which is key to curbing the emergence of worrying new strains and saving lives from the world's biggest outbreak.

"I'm just not sure (getting vaccinated) is in my best interest," said Jackson, 39, as he repaired a car window in the capital Washington.

"I feel like we are always last or are guinea pigs, the ones that get tested on," he added.

Whether people trust the medical establishment and its treatments weighs heavily in their decision whether to get vaccinated, yet racism in America taints both areas.

A notorious example is the Tuskegee study, in which US government scientists monitored Black men with syphilis for 40 years starting in 1932, but didn't give them treatment in order to observe the infection take its course.

Tuskegee, however, wasn't an isolated incident.

"Dangerous, involuntary and nontherapeutic experimentation upon African Americans has been practiced widely and documented extensively at least since the 18th century," according to Harriet A. Washington's 2006 book "Medical Apartheid."

The Nation of Islam, which the Southern Poverty Law Center considers a hate group, has employed this grim past to urge African Americans to boycott the Covid-19 shot.

"Don't let them vaccinate you with their history of treachery through vaccines," says a Nation of Islam webpage that includes a Tuskegee study photo of a Black man with a syringe stuck in his arm.

Figures released by the Centers for Disease Control and Prevention (CDC) in February said 46.5 percent of Black people don't intend to get the Covid vaccine, compared with 32.4 percent of Hispanics and 30.3 percent of whites.

Significantly, however, all three groups have shown a steady increase in willingness to be inoculated over the course of the pandemic.

"It's just the fear. The fear of vaccines, of being guinea pigs, things like that. That's what Black folks are concerned about," said John Jones III, a community organizer in Los Angeles.

"And then being told to take this 'medicine' that came out of nowhere? It's a battle, right there," the 40-year-old added, saying he hadn't decided whether to get vaccinated.

There is another, well-documented problem: experts say that when Black people seek medical care they are less likely to have their symptoms believed or receive adequate treatment.

For example, Black women are less likely to have their breast cancer mammograms seen by a specialist as opposed to a general radiologist, according to a 2012 study from the University of Illinois at Chicago.

Since the United States detected its first coronavirus cases just over a year ago, the disease has taken a particularly heavy toll on African Americans.

The Covid Tracking Project says 161 per 100,000 Black people have died, the highest ratio of any group in a nation with 485,000 reported deaths -- more than double the next hardest-hit country, Brazil.

The first month of the vaccine rollout in the United States also showed stark racial divisions, with over 60 percent of shots going to white people, followed by Hispanics at 11.5 percent and Black people at 5.4 percent, according to the CDC.

As questions have mounted over how the shots are being distributed, public and private groups have pushed efforts to promote the vaccine among African Americans and ensure they get their share of doses.

Failure to do so carries significant risks, experts warn.

"If you are not vaccinating the people who live in the places where there is the highest burden of disease, then you are only allowing the disease to continue to spread and also to continue to mutate," said Darrell Gaskin, a health policy professor at Johns Hopkins University.

New types of the virus have been shown to render current shots less potent and cause reinfections in people who previously had the classic Covid strain.

Greg Ashby has heard the arguments against the vaccine, but he politely disagrees. He turned up to get his shot this week in Houston.

"But for me, I know that this is what we really need to do to help curve the situation, and I'm here to do it," he told AFP.