A disturbing Republican plot is unfolding before our eyes -- will their scheme be completed by 2024? 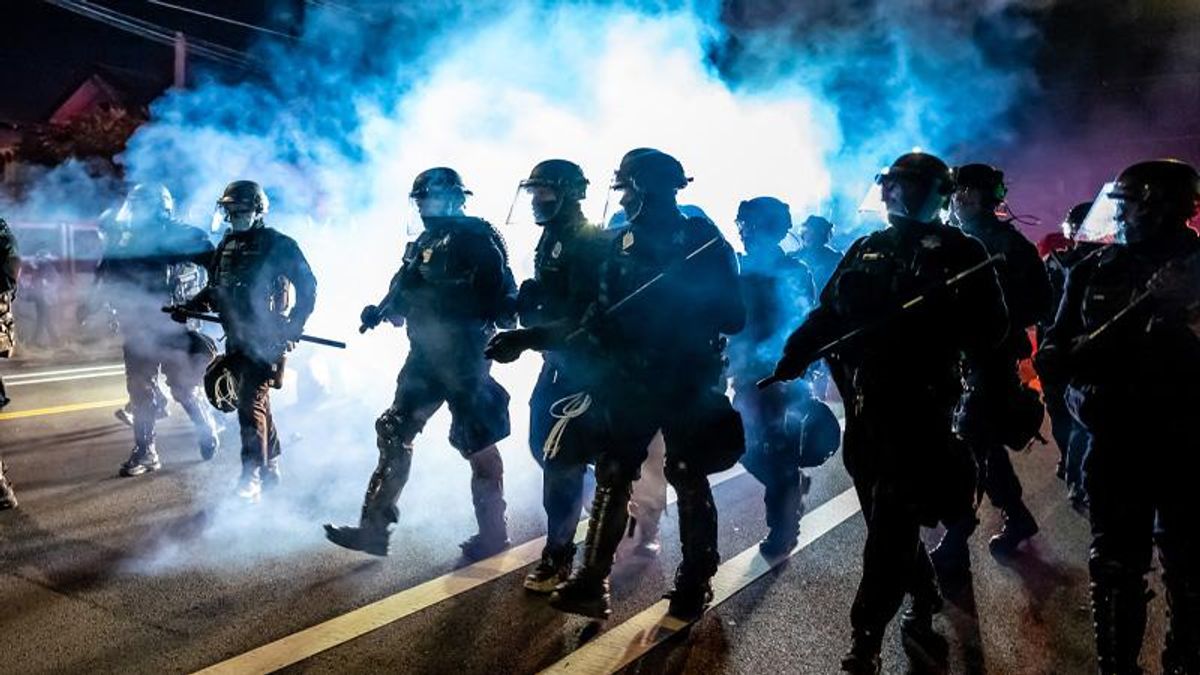 Americans thought January 6 was the peak of the effort to end democracy in America and replace it with strongman authoritarian rule. But January 6 was merely the tip of the iceberg.

And it's not just about Donald Trump. This "iceberg" monster that threatens to sink the United States is about ending democracy altogether here and replacing it with a wealthy, white aristocratic oligarchy.

The less visible but largest part of that iceberg is in the states, and it's huge.

Red state after red state is nakedly and openly flipping from democracy to a form of authoritarian oligarchy.

Authoritarian Republicans at the state level, in state after state, are criminalizing protest with such severe penalties that simply stepping off the sidewalk and into the street during a protest could land you 15 years in jail.

At the same time, they're legalizing the murder of pro-democracy, anti-fascist protesters.

The man who killed Heather Heyer and wounded numerous others at the Charlottesville Nazi/Trump rally with his car, for example, could well now be found not-guilty if legislation that has already passed in one state and is pending in multiple others were to pass in Virginia.

These new laws say that any motorist who is trying to "flee a riot" and injures or kills people in the process can be held harmless. It's the protest/automobile equivalent of "stand your ground laws."

Finally, and most alarming, these authoritarian Republicans are seizing control of the actual mechanism of voting.

We're seeing this writ large in Arizona right now, where rightwing conspiracy advocates were hired by Republicans in the state legislature to "audit" the November vote in an attempt to prove that Donald Trump actually won that states election.

While that sounds bad, wait until 2022 and 2024 when a couple dozen red states will have seized complete control of their election systems, like Republican politicians just did in Georgia.

They have cut election professionals and the Secretary of State out of the process entirely and handed to partisan Republicans the power to decide who actually won or lost the elections in the state, which votes get counted and which don't, regardless of what the voters said overall.

These Republicans explicitly do not believe in democracy. They think it's a quaint and outdated idea, but that they know a better way to run a country. Just let the "really smart" people make all the decisions and everything will work out just fine.

And how do you know who is "really smart?" Whoever is richest. Our culture constantly amplifies this message: the richest guy in the room is also the smartest. It's the political version of Neo-Calvinism.

We find it throughout our media where our super-wealthy people are treated like rock stars and demigods, and it's implicit in our legal system where wealthy criminals almost never go to jail.

Even when their crimes destroy the lives of thousands, like we saw during the the Bush crash of 2008, multimillionaires like Steve Mnuchin made off with huge piles of cash while tens of thousands of working-class Americans lost their homes and many lost their families and even their lives. As if to prove the rule, the one guy who did go to prison for financial fraud was Bernie Madoff – but he didn't steal from average people, he stole from rich people. Now that is a serious crime.

Looking just at the most recent elections faced by House and Senate members who supported overturning the 2020 election, the Center for Media and Democracy found some mind-boggling statistics.

Josh Hawley and Rick Scott are arguably the two most serious contenders for president on the Republican side in 2024. Hawley received $41,169,601 from dark money groups leading up to his last election, according to the Center, and Rick Scott received $35,142,565.

This does not include money their official campaigns for the candidates themselves took in or spent; it's just the largely invisible "dark money" spent to help them that we only learn about months after the election.

They document how Senator Ted Cruz got well over $8 million, and even Colorado's eccentric gun fetishist Lauren Boebert got $4,917,827.

All of this was made possible by right-wingers on the Supreme Court who blew up a whole series of good-government, anti-bribery laws Congress passed dating all the way back to 1907, with the ultimate knife in the back of democracy coming in 2010 with their Citizens United decision.

The top donor husband and wife who helped members of Congress who voted to overturn Joe Biden's election kicked in $191.4 million to the dark-money groups supporting these politicians. Just behind them a single hedge fund CEO put in $59.8 million. Next was a guy who inherited a fortune from his father: he tossed in $50 million just support these authoritarians, followed by another financier at $46 million. The list goes on…

The Center documents how dozens of corporations also added in tens of millions of additional dollars to support those members of Congress who wanted to overthrow the election of 2020.

While the Center reports that Rupert and Lachlan Murdoch tossed in $2 million, less than half of the $4.4 million Betsy DeVos put in, their network, Fox News, has done the really heavy lifting to support ending democracy in America.

Every night in prime time, multimillionaire hosts like Tucker Carlson promote the idea that white authoritarian rule is necessary to keep America from descending into chaos caused by dark-skinned immigrants and Black people, particularly if they're allowed to vote.

While Ronald Reagan supported apartheid in South Africa, the modern conservative movement he birthed is now supporting it here in the United States.

We thought we dodged a bullet with the 2020 election. But Republicans in state after state are loading cannons as you're reading this, and the very concept of democracy itself is their bullseye.