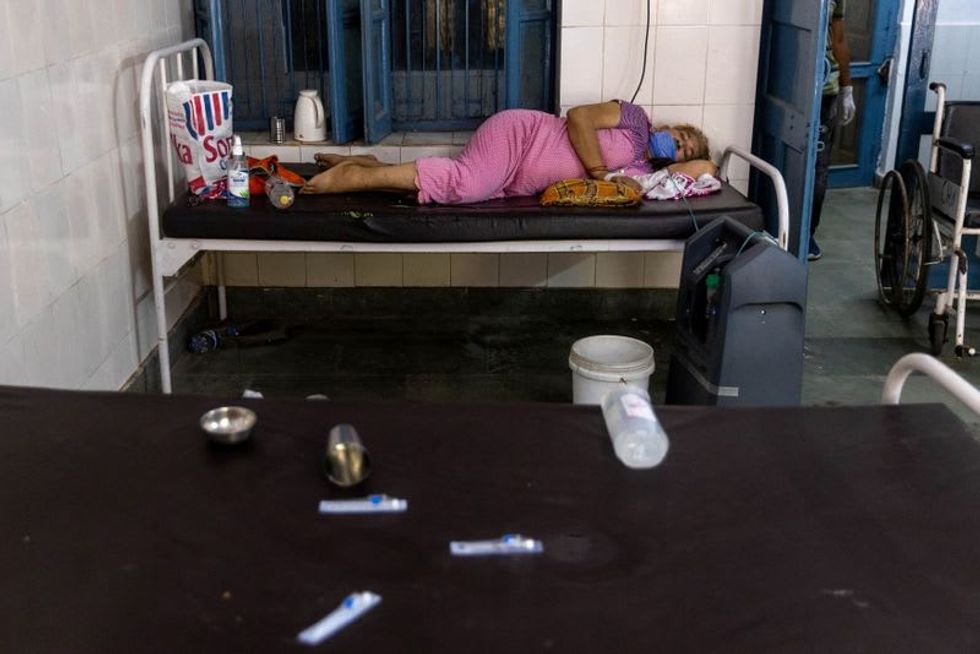 By Danish Siddiqui and Sanjeev Miglani

NEW DELHI (Reuters) -India's coronavirus death toll crossed a quarter million on Wednesday in the deadliest 24 hours since the pandemic began, as the disease rampaged through the countryside, overloading a fragile rural healthcare system.

Boosted by highly infectious variants, the second wave erupted in February to inundate hospitals and medical staff, as well as crematoriums and mortuaries. Experts are still unable to say with certainty when the figures will peak.

Deaths swelled by a record 4,205 while infections rose 348,421 in the 24 hours to Wednesday, carrying the tally past 23 million, health ministry data showed. Experts believe the actual numbers could be five to 10 times higher, however.

Funeral pyres have blazed in city parking lots, and scores of bodies have washed up on the banks of the holy river Ganges, having been immersed by relatives whose villages were stripped bare of the wood needed for cremations.

Lacking beds, drugs and medical oxygen, many hospitals in the world's second-most populous nation have been forced to turn away droves of sufferers, while tales of desperate relatives searching for someone to treat dying loved ones have become sickeningly commonplace.

Many victims die without a doctor on hand to issue a death certificate, and even when a doctor is available, COVID-19 is not specified as the cause of death unless the deceased was tested for the disease, which few have been.

Although the infection curve may be showing early signs of flattening, new cases are likely to fall off slowly, according to virologist Shahid Jameel.

"We seem to be plateauing around 400,000 cases a day," the Indian Express newspaper quoted him as saying. "It is still too early to say whether we have reached the peak."

India, with a population of 1.4 billion, accounts for half of COVID-19 cases and 30% of deaths worldwide, the World Health Organization said in its latest weekly report.

The full impact of the B.1.617 variant found in India, which the WHO has designated as being of global concern, is not yet clear, it added.

Dr. Balram Bhargava, head of the main Indian health agency responding to the coronavirus, has said districts where over 10% of those tested have the disease should remain locked down for another six to eight weeks to control the spread.

Currently, three-quarters of India's 718 districts have what is known as a test-positivity rate above 10%, including major cities like New Delhi, Mumbai and the tech hub of Bengaluru.

Daily infections are shooting up in the countryside in comparison to big towns, where they have slowed after last month's surge, experts say.

More than half the cases this week in the western state of Maharashtra were in rural areas, up from a third a month ago. That share is nearly two-thirds in the most populous, and mainly rural, state of Uttar Pradesh, government data showed.

Television showed images of people weeping over the bodies of loved ones in ramshackle rural hospitals while others camped in wards tending to the sick.

A pregnant woman was taking care of her husband who had breathing difficulties in a hospital in Bhagalpur in the eastern state of Bihar, which is seeing a case surge its health system could barely have handled at the best of times.

"There is no doctor here, she sleeps the whole night here, taking care of her husband," the woman's brother told India Today television.

In a corridor outside, two sons were wailing over the body of their father, saying repeatedly that he could have been saved if only he had been given a bed in an intensive care unit.

At the general hospital in Bijnor, a town in northern Uttar Pradesh, a woman lay in a cot next to a garbage can and medical waste.

"How can someone get treated if the situation is like this?" asked her son, Sudesh Tyagi. "It is a hell out here."