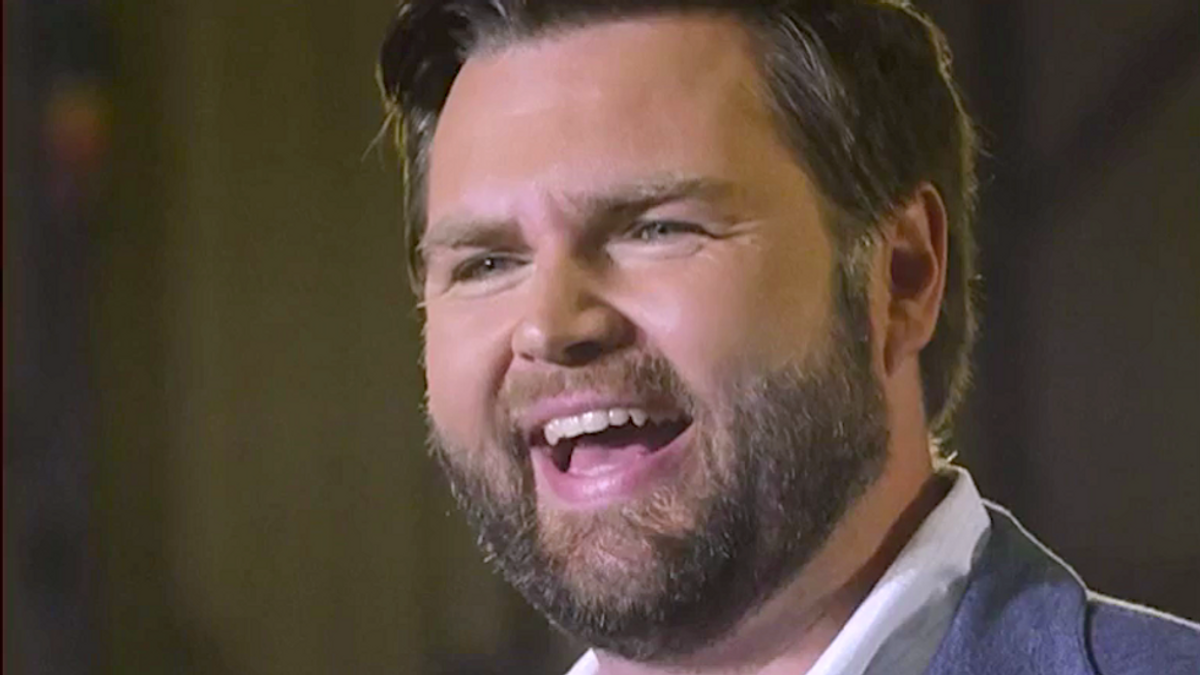 "Hillbilly Elegy" author J.D. Vance, who is seeking the GOP nomination in Ohio's 2022 U.S. Senate race, will say and do a variety of buffoonish things in order to show the MAGA crowd that he deserves their support — and that includes praising far-right conspiracy theorist and "Infowars" host Alex Jones. Never Trump conservative Jonathan V. Last, in an article published by The Bulwark on September 6, examines a pro-Jones tweet that Vance recently posted and stresses that it underscores Vance's desperate need for attention.

On September 5, Vance tweeted, "Alex Jones is a far more reputable source of information than Rachel Maddow. One of them is censored by the regime. The other promoted by it."

Vance's tweet is laughable. MSNBC's liberal Maddow has a reputation for being a relentless fact-checker, whereas Jones makes his living promoting imaginative conspiracy theories. But when it comes to "owning the liberals," there are no limits to Vance's willingness to debase himself. Vance's recent gimmick has been slamming "the childless left" and saying that Democrats who don't have biological children should not hold public office.

"You can tell that Vance's tweet was engineered not to say anything, but to generate pushback from mainstream media types and blue-check libs by the use of two words: 'reputable' and 'far,'" Last explains. "Why would Vance say that Jones was more "reputable" than Maddow? It would be one thing for Vance to argue that Jones was a more 'accurate' or 'reliable' source of information than Maddow. I mean, neither of those characterizations would be true, and both would be checkable as factual matters. But the weirdness of choosing to proclaim how 'reputable' Jones is runs directly counter to Vance's complaint that 'the regime' — by which he presumably means the entirety of Mainstream America — has deplatformed Jones."

Last continues, "In short, Alex Jones has a terrible reputation, which is why 'the regime' has deplatformed him. It's weird for Vance to plant his flag on the reputation score of Jones rather than on trustworthiness or accuracy. Saying that Jones is more 'reputable' than Maddow only makes sense if you're trying to pick a subjective characterization that can't be tallied by any objective measures."

The "far" part, according to Last, shows Vance's willingness to resort to Donald Trump-like exaggeration.

Vance wasn't always a far-right MAGA extremist. During the 2016 presidential election, Vance was a more traditional conservative — and he cynically commented that if Trump became president, it would be terrible for the U.S. but would help him sell more books. These days, however, Vance is a devout Trump supporter, and he even praises Hungarian strongman Viktor Orbán.

Vance's pro-Jones tweet, according to Last, shows that he is "very, very thirsty" and fears that his GOP primary opponent, former Ohio State Treasurer Josh Mandel, will receive the nomination.

Last argues, "J.D. Vance is getting pantsed by Josh Mandel in the Republican Senate primary in Ohio right now. Despite Fox News going all-in on his candidacy, despite the endorsement of the Republican establishment blob, despite huge donations from his tech-world patrons, Vance just broke double digits — while Mandel has been leading the race from the start. That's because conservative Ohio voters can tell the difference between an authentic MAGA man and Marco Rubio with a beard."

According to Last, Trumpian voters in Ohio view Mandel as a true MAGA extremist and see Vance as someone who is simply pretending to be one.

"Josh Mandel is the real deal, and Ohio Republicans know it — which is why Vance is so desperate to generate pushback from liberals and the mainstream media on Twitter," Last emphasizes. "Trying to get momentum from negative polarity is the only thing his candidacy has going for it — aside from gobs of cash and in-kind contributions from Fox. J.D. Vance is desperate for you to tell him he's wrong on Twitter. He's so, sooooo thirsty. Poor guy."

Here is a list of the winners in key categories for the 73rd Emmy Awards, which were handed out in Los Angeles on Sunday.

Netflix had a stellar night, winning its first awards for top series with British royals saga "The Crown" (best drama) and "The Queen's Gambit" (best limited series). Overall, both shows each earned 11 Emmys.

'A set-up for an insanity defense?': CNN panel baffled by Trump's latest move in Georgia

Discussing a written demand from Donald Trump to the state of Georgia to decertify the 2020 presidential election results delivered late Friday, a CNN panel on Monday morning said they were baffled that the former president would pull such a stunt while under investigation for election tampering in the state.

Sitting in with "New Day" hosts John Berman and Brianna Keilar, the New York Times' Maggie Haberman and CNN's John Berman tried to wrap their heads around the letter -- expressing surprise that he would put in in writing.