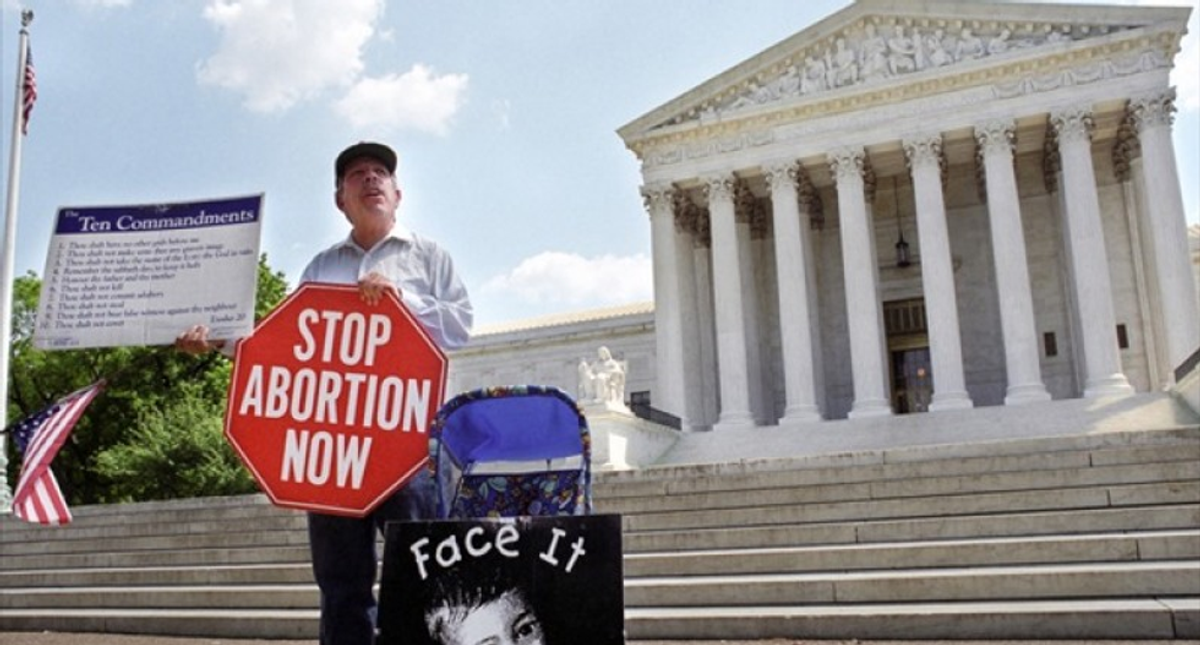 Americans like to say we don't leave Americans behind.

We don't abandon people to be oppressed and victimized by a bunch of gun-toting yahoo zealots who hate freedom and hate science and think they have a direct line to God.

So, when do we start evacuating women and girls from Texas?

Women and girls in Texas no longer have meaningful control over their own bodies. They no longer enjoy full citizenship.

Now that the United States is out of Afghanistan, we've got a bunch of C-17s sitting around. I say gas them up and go.

A woman's rights are now subordinate to a collection of cells which cannot live outside her body. She's a mere host for this volition-less thing growing inside her. A handmaid.

Six weeks is when the Texas Brown Shirts say the “fetus" has a “heartbeat."

Rubbish. 1) At six weeks it's not a fetus: It's an embryo. It looks like a tadpole. 2) That's not a “heartbeat." There is no functional heart until around 10 weeks. Any sound is electrical activity generated by embryonic cells.

And 3) The law is unconstitutional.

The Texas Brown Shirts know this. That's why they're trying to evade Roe v. Wade — still the law of the land — by offering vigilantes 10 grand to bring a lawsuit against anyone performing an abortion or “aiding and abetting" a woman who might get an abortion.

Say you're an anti-choice idiot in Texas, and you suspect that woman next door might have been pregnant. You saw her get into an Uber. You saw her return sometime later. What if that shameless hussy got an abortion?

Sue the doctor you think might have helped her. Sue Uber while you're at it, and the person answering the phone at the health clinic. Texas Gov. Greg Abbot and the rest of those sniveling Republican hypocrites who dare to call themselves “pro-life" even as they pitch hissy fits over vaccine mandates and mask-wearing during the worst pandemic in 100 years will pay you a nice little bounty.

Neighbors can sue neighbors, people can rat out each other, gossip and rumor will run as free as the Delta variant.

This is contagious hatred.

Florida's own Brown Shirts are envious. It took state Senate President Wilton Simpson, an egg farmer, (in Florida the jokes write themselves, y'all) about three seconds after the U.S. Supreme Court upheld Texas' War on Women law to declare that the Legislature was “already working on" something similar.

When a reporter asked for his reaction to the Texas measure, Simpson texted back a smiley face in sunglasses emoji. Simpson represents Citrus and Hernando counties and part of Pasco in the Legislature.

Rep. Anthony Sabatini, the Matt Gaetz Mini-Me and gun freak, has announced that he will file a Texas-style bill to stop all terminations in Florida, no doubt figuring it will help win the Trumpist vote in his campaign for Congress.

Indeed, so “pro-life" that his goon of an education commissioner is docking the pay of school board members who dare to try protecting children and teachers from a deadly virus with a mask mandate.

If the United States actually operated according to its own Constitution, the Texas law would have been slapped down by the Supreme Court. Instead, five theocrats — the three Trump appointees plus the paleo-reactionaries Clarence Thomas and Samuel Alito — simply do not care what harm they cause real life women and trashed what we quaintly used to call “the rule of law."

In a blazing dissent, Justice Sonia Sotomayor wrote, “Last night, the court silently acquiesced in a state's enactment of a law that flouts nearly 50 years of federal precedents," and allowed Texas to “prohibit women from exercising their constitutional rights."

So much for the court calling “balls and strikes," as Chief Justice John Roberts (who joined the court's three remaining progressives in dissent) famously put it. This non-ruling ruling denies that the game has any rules at all. If you want to beat the pitcher with your bat, have at it.

Since constitutional rights apparently mean so little, what's to stop, say, Oklahoma trying to outlaw the right to same-sex marriage by crafting a Texas-style statute in which the citizenry gets paid to turn in gay couples looking to get hitched? Or another state doing this with guns or due process or any other constitutional right Americans assume we have?

Some legal experts have opined that the Supremes are waiting for some doctor or some taxi driver or some women's health operation to get sued by some pro-birth fundamentalist for allegedly participating somehow in an abortion and then must argue in court that Texas' law is unconstitutional.

Or maybe they're holding off on hearing a real argument until Mississippi's no-abortions-after-15-weeks law, now blocked by a lower court on the ground that it conflicts with Roe, comes before the court sometime this fall.

While the women of Texas wait for the right court case, some will have had to travel out of state to get the health care they need. Many can't afford that. Some will be forced to give birth against their will. Some will seek unsafe, illicit abortions. Some could die because Texas forced them back to the pre-Roe world of coat hangers and back alleys.

Abortion will always be with us. The question is, will it be safe?

The wives and daughters of Texas' elites — including those of the misogynists in the legislature and the governor's office — will never be unable to get an abortion. They're “nice girls" who may have made a “mistake," unlike the less white and the less affluent who are probably just sluts who use abortion as birth control.

The “pro-life" Right doesn't care about babies. As has often been pointed out, they oppose social programs from food aid to fair housing to early education, all of which benefit young children.

What they care about is control. For centuries — millennia, even — conservatives fought against extending women property rights, denied women the right to vote, the right to an education, the right to autonomy, and the right to reproductive freedom.

Some anti-choice types favor declaring a fertilized human egg a person with full constitutional rights, and some even oppose contraception.

The human woman whose uterus may or may not be tenanted by a zygote is of less importance.

The United States evacuated thousands of Afghan women so that they would not be killed or imprisoned or denied the right to an education under a repressive Taliban regime. It's a bitter irony that now, as many of them begin to start new lives in America, our democracy is faltering, our rights are being eroded, and the document on which we base our liberty is under assault from the very lawmakers and judges who have sworn to uphold it.

No one is coming to rescue us. We have to do it ourselves.