Abortion: how things stand in as the US Supreme Court prepares to rule 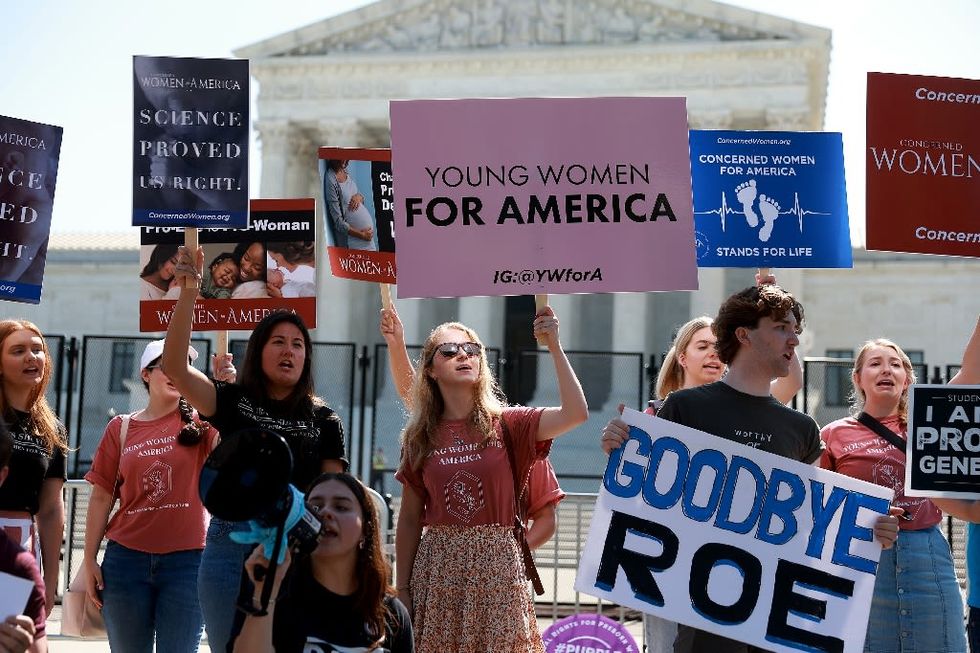 Anti-abortion protesters outside the US Supreme Court in Washington

Washington (AFP) - The Supreme Court is expected to deliver an opinion by the end of June that could roll back 50 years of abortion rights in the United States.

This is the state of affairs in the country ahead of the much-anticipated ruling by the nation's highest court:

In the absence of any federal laws, it is the 1973 ruling in the landmark Supreme Court case known as Roe v. Wade that guarantees a woman's right to an abortion in the United States.

A 1992 court decision, in Planned Parenthood v. Casey, protects access to abortion until "viability," when the fetus can survive outside the womb, typically between 22 and 24 weeks of pregnancy.

States are also not allowed to enact any laws that would impose an "undue burden" on a woman seeking an abortion.

This legal framework could be upended soon.

According to a draft opinion leaked in May, the conservative majority on the nine-member court is prepared to overturn Roe v. Wade.

"We hold that Roe and Casey must be overruled," the author of the opinion, Justice Samuel Alito, wrote. "It is time to heed the Constitution and return the issue of abortion to the people's elected representatives."

Conservative states have long tested the limits of the "undue burden" standard to impose laws restricting abortion, forcing many clinics to close their doors.

The states of West Virginia and Mississippi, for example, each have only one abortion clinic, while there are more than 150 in California.

Some states force minors to have parental consent before undergoing an abortion or to listen to the heartbeat of the embryo.

Since September 1, Texas, following a long legal battle, has banned abortions after six weeks, before many women even know they are pregnant.

Money is another factor.

But 15 other states dip into public funds to help low-income women pay for the procedure.

There were more than 930,000 abortions in the United States in 2020, according to the latest statistics from the Guttmacher Institute, which has noted a recent increase after 30 years of steady decline.

This amounts to 14.4 abortions for every 1,000 women of procreative age, about the same as in most developed countries.

Nearly 50 percent of the women seeking abortions live below the poverty line and Black and Hispanic women are overrepresented as a proportion of the population -- 29 percent and 25 percent respectively.

According to the US Centers for Disease Control and Prevention, 92.2 percent of abortions in the United States take place in the first trimester.

More than 60 percent of Americans believe abortion should remain legal in all or most cases, a figure that has remained relatively stable for the past few years, according to a survey by the Pew Research Center.

But there are enormous differences based on political persuasion: 80 percent of Democrats believe abortion should remain legal in all or most cases while just 35 percent of Republicans do.

And the divide is widening. Those figures were 72 percent and 39 percent, respectively, in 2016.

Religious conviction also plays a large role. Seventy-seven percent of white evangelicals believe abortion should be illegal in most cases.

During the 2016 presidential campaign, Republican Donald Trump managed to attract many voters on the religious right with his promise to name justices to the Supreme Court who shared their values and would notably be prepared to strike down Roe v. Wade.

During his four years in the White House, Trump nominated three justices to the court, giving conservatives a solid 6-3 majority.

Their arrival spurred Republican state lawmakers to pass increasingly restrictive abortion laws, several of which eventually made their way to the nation's highest court.