After riots, Parliament votes in new prime minister in Kazakhstan 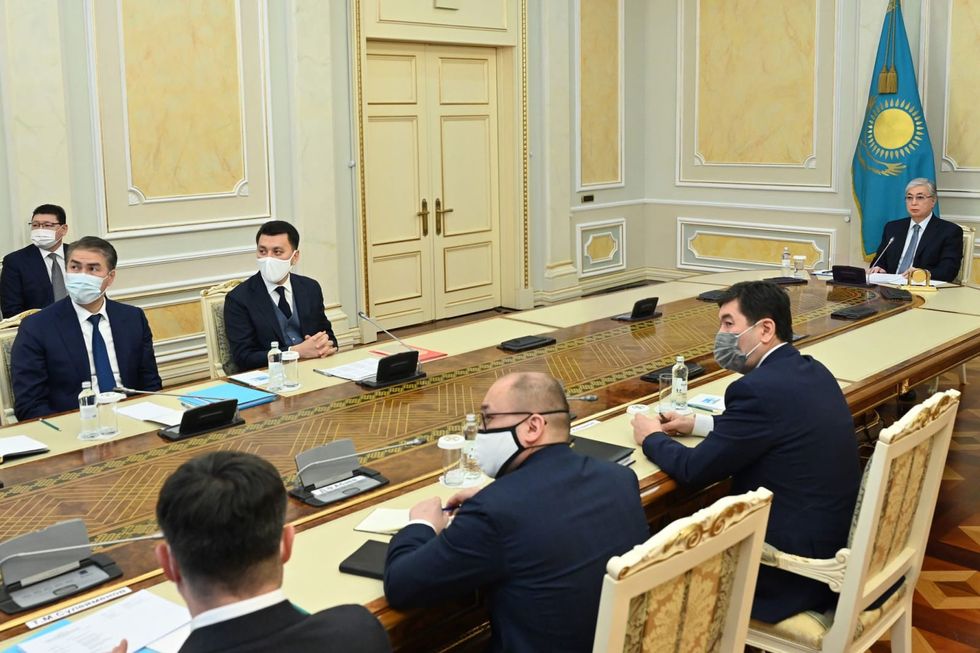 Kazakh President Kassym-Jomart Tokayev (R) takes part in a parliamentary session via videoconference during which lawmakers have installed a new prime minister after days of riots. -/Kazakh Presidency /dpa

Kazakhstan lawmakers have installed a new prime minister, as the country's rulers seek to reassert order after days of riots.

The parliament of the Central Asian country on Tuesday voted in Alikhan Smailov, state television reported. Smailov had already taken the post temporarily, after the dismissal of the old government a week ago, according to the report.

Smailov was previously deputy prime minister and also long had the post of finance minister.

President Kassym-Jomart Tokayev had earlier suggested Smailov for the job.

On Monday, Tokayev told a meeting of a Russian-led regional security alliance order has been restored after days of violent unrest in which more than 150 people were killed and thousands detained.

"Complete order has been restored in Kazakhstan. Threats to the country's security have been averted," Tokayev told a video meeting of the Collective Security Treaty Organization (CSTO), which he had called in to quell riots.

The first foreign troops who showed up to restore order in Kazakhstan after widespread rioting last week are already set to return home this week, according to Tokayev.

Departures should begin in two days, he said during an address to Parliament. "The main mission of the CSTO is done."

Meanwhile, the number of detentions was approaching 10,000. According to the Tengrinews agency, the Interior Ministry said that around 9,900 people had been detained during the riots.

Kazakhstan, which borders Russia and China, was gripped by unrest for a week, after anti-government protests grew out of resentment over increased fuel prices at petrol stations in the oil and gas-rich country.

Alongside peaceful demonstrations, there were also violent riots, especially in the metropolis of Almaty.

Tokayev declared a state of emergency, dismissed the government and ordered the military to shoot at demonstrators without warning.

Evidence appeared to be emerging that the widespread destruction was not only caused by protesters angry at higher fuel costs, corruption and authoritarian leadership.

The balance of power in Kazakhstan has shifted, according to regional political scientists, in the course of a deadly week.

Alongside many peaceful demonstrators, there were also organized rioters who caused violence, particularly in Almaty, according to Diana Kudaibergenova, who teaches at Cambridge University.

In Almaty, peaceful protests were hijacked by organized criminal groups, she said in a tweet, adding that it is important to distinguish between the two groups.

Residents reported the sound of gunfire and rioting mobs roaming the streets, while several shops selling guns were looted.

A video of men grabbing guns from the boot of a car has been widely shared online.

As of January 4, "pre-prepared storm troopers played the leading role, intent on violent confrontation without any slogans," according to Kazakh political scientist Daniyar Ashimbayev, in a Telegram post.

Kazakh experts see evidence of coordinated action in the targeting of police stations and administrative buildings, strategic points that appear to have been deliberately attacked.

This rapid radicalization cannot only be attributed to the escalation of popular anger, of young men on the streets, according to an analysis by the Moscow Carnegie Center.

While much remains unclear about the week of unrest, "the most important thing is obvious: the Nazarbayev era is over in Kazakhstan," according to the Carnegie Center's analysis, a reference to former president Nursultan Nazarbayev, who had continued to wield much influence despite stepping down in 2019.

Nargis Kassenova, a Central Asia researcher at Harvard University, called on the government to provide information about what happened.

"The Kazakhstan government owes us the truth, full and unabridged, not manipulated narratives and fakes. People are not stupid, and they are angry," she said in a tweet.

Meanwhile, looking ahead, some were optimistic.

"In today's meeting, as the Turkic States, we have emphasized our support to Kazakhstan. We believe that Kazakhstan and the Turkic World will emerge stronger from this challenge. Our strength comes from unity!" Turkish Foreign Minister Mevlut Cavusoglu said in a tweet on Tuesday.