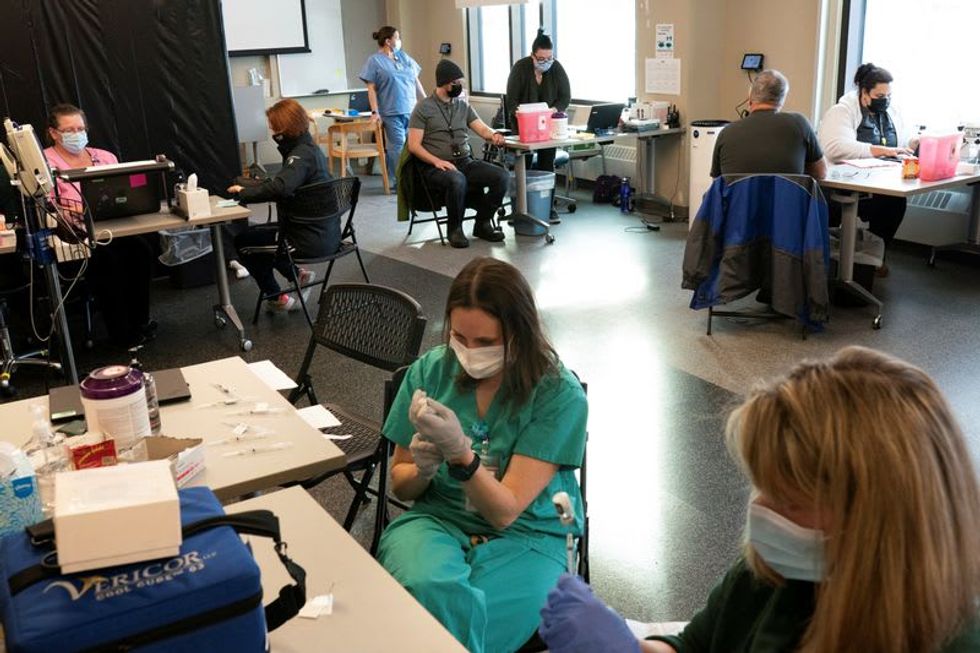 ANCHORAGE, Alaska (Reuters) - Alaska, which led most U.S. states in coronavirus vaccinations months ago, took the drastic step on Wednesday of imposing crisis-care standards for its entire hospital system, declaring that a crushing surge in COVID-19 patients has forced rationing of strained medical resources.

Governor Mike Dunleavy and health officials announced the move as the tally of newly confirmed cases statewide reached another single-day record of 1,224 patients amid a wave of infections driven by the spread of the highly contagious Delta variant among the unvaccinated.

The Delta variant is “crippling our healthcare system. It’s impacting everything from heart attacks to strokes to our children if they get in a bike accident,” Dr. Anne Zink, Alaska’s chief medical officer, said at a news conference with Dunleavy.

Idaho, another one of several largely rural states where COVID-19 cases have overwhelmed healthcare systems in recent weeks, activated its own crisis-care standards statewide last Thursday, citing a spike in hospitalizations that "has exhausted existing resources."

The new document limits liability faced by providers for crisis-level medical care in all Alaska hospitals.

Moreover, it acknowledges the realities of rationed care statewide, with scarce medical supplies and staff prioritized in a way that denies normal levels of care to some patients for the sake of others, depending on how sick they are and their chances for recovery.

Some critically ill patients, for example, have had to be treated outside intensive care units where they would typically be admitted, Zink said.

“Care has shifted in Alaska’s hospitals. The same standard of care that was previously there is no longer able to be given on a regular basis. This has been happening for weeks,” Zink told reporters.

To cope with the COVID-19 influx, Alaska has signed an $87 million contract to enlist hundreds of healthcare workers from out of state, officials said.

About one-fifth of Alaska hospital patients are infected with COVID-19, according to state data. But that figure understates the burden placed on the system as a whole as it "squeezes out" capacity to treat victims of car accidents, strokes, heart attacks and other ailments, Dunleavy said.

Paradoxically, back in April, Alaska had ranked among the top states getting COVID-19 vaccines into the arms of residents, helped in large part by efforts of the state's pandemic-conscious indigenous population.

Alaska has since slipped below the national average, with just 58% of residents aged 12 and older fully vaccinated, according to the state database. The vaccination slump coincided with significant political resistance to public health requirements.

In May, voters in Anchorage, the state’s largest city, elected a new mayor, Dave Bronson, who campaigned against health mandates and has repeatedly expressed his refusal to get vaccinated. Dunleavy has opposed any vaccine mandates.

At Wednesday's news conference, the Republican governor defended his positions, citing Alaska's third-lowest rate of COVID-19 deaths in the nation per capita.