Amazon driver died in bathroom sheltering from tornado with colleagues 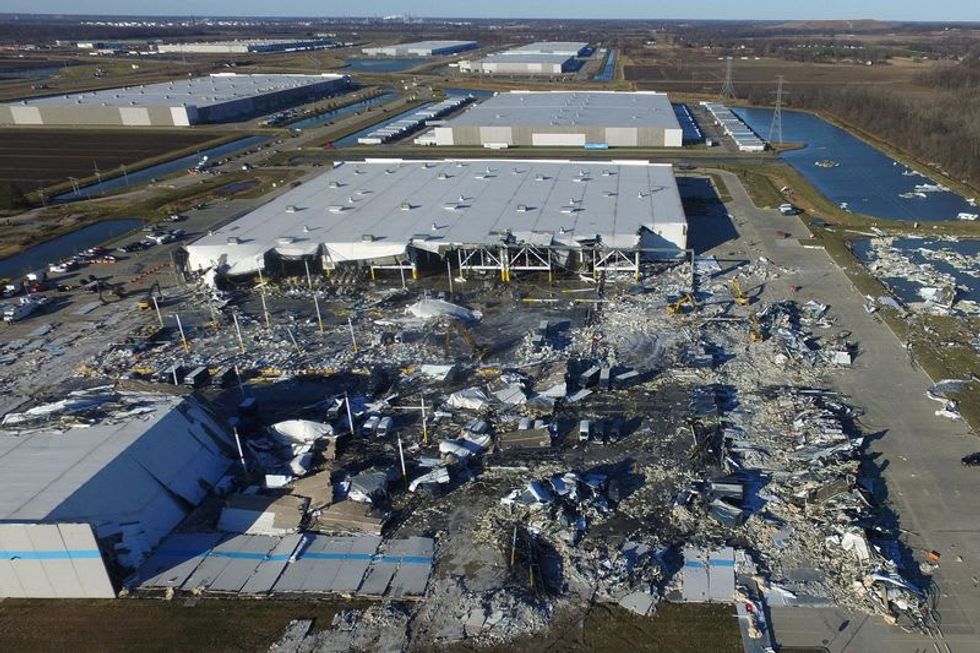 EDWARDSVILLE, Ill. (Reuters) - Amazon cargo driver Austin J. McEwen, 26, was an only child who loved to listen to rapper Mac Miller and hunt with his friends.

He died trying to shelter from a powerful tornado in the bathroom at an Amazon.com warehouse on Friday night, according to a coworker.

McEwen was one of six workers identified by police on Sunday who were killed when their plant in Edwardsville, Illinois, buckled under the force of the devastating tornado. A swath of tornadoes ripped through six U.S. states, leaving a trail of death and destruction at homes and businesses stretching more than 200 miles (322 km).

"He was my friend and he didn't make it," said coworker Brian Erdmann, who was on his way to make a delivery to the warehouse. "If I would have got back 45 minutes earlier, I probably would have been at the same place. I would have been right there with him."

Several employees told Reuters that they had been directed to shelter in bathrooms by Amazon managers after receiving emergency alerts on mobile phones from local authorities. The first warning was issued about 40 minutes before the tornado hit, according to firefighters and the Illinois governor.

Amazon confirmed in an email that the site got tornado warnings through various alerts. "Our team worked quickly to ensure as many employees and partners could get to the designated Shelter in Place," the company said in a statement. "We thank them for everything they were able to do."

Workers gave conflicting accounts as to whether the bathroom was the designated shelter. Amazon did not comment.

Some of those workers said they had kept their phones in violation of an Amazon policy that prevents them from having cellphones at work.

The company responded by saying employees and drivers are allowed to have their cellphones.

"I was at the end of my route. I was just getting in the building and they started screaming, 'Shelter in place!'" said David Kosiak, 26, who has worked at the facility for three months. "We were in the bathrooms. That's where they sent us."

"It sounded like a train came through the building. The ceiling tiles came flying down. It very loud. They made us shelter in place til we left - it was at least two and a half hours in there."

The Amazon facility was hit about 8:38 p.m. central time by the tornado accompanied by 155 mile-per-hour (249 km-per-hour) winds, authorities said. The force was so severe that the roof was ripped off and 11-inch (28-cm) thick concrete walls longer than football fields fell on themselves.

At least 45 Amazon employees made it out safely. Authorities had given up hope of finding more survivors as they shifted from rescue to recovery efforts that were expected to last days.

On Sunday, Amazon workers arrived at the warehouse across the street, heavily guarded by security, to start shifts.

"It's a reminder of the trauma that I just endured but I will be returning to work at Amazon," said McEwen's friend and coworker Emily Epperson. "This is my livelihood.”