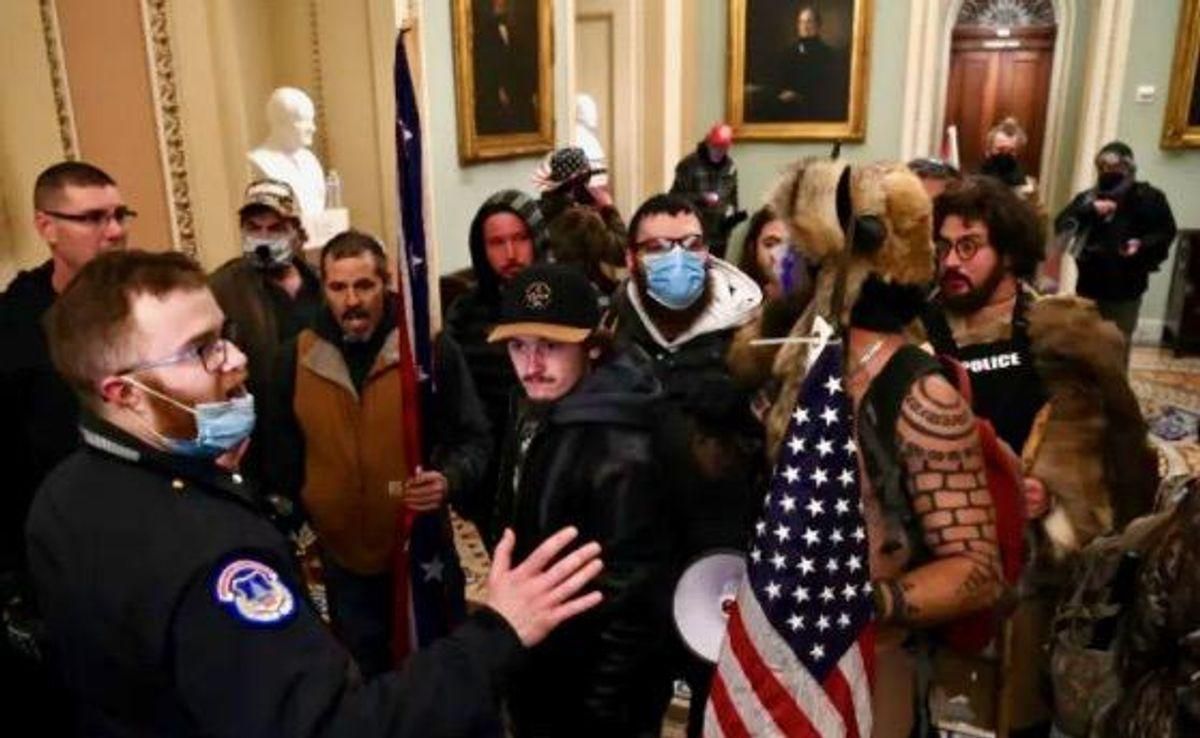 It has been three months since Donald Trump's followers attacked the U.S. Capitol. The events of that day were surreal. It was all as if a poorly written Hollywood action movie or video game had broken through the fourth wall and become reality.

But in such a story there would have been a climax and resolution, in which the good guys arrived just in time to defeat the terrorists, the corrupt president and his cabal would be taken down, and all would be made right and good in America and the world again … until the inevitable sequel.

In the world as it exists, there will be no such conclusion — although we still await the sequel. America is stuck in a type of permanent anticlimax, in which Trump's attempted coup and the Capitol attack took place and the story abruptly ended.

The Democrats do not want proper closure to the events of Jan. 6, because to have a proper investigation, with real accountability for the plotters and other wrongdoers in the Trump regime and elsewhere, would be a "distraction." President Biden evidently agrees: He aspires to "bipartisanship" and aims to "heal the nation." There's a problem: The Republicans, by and large, were co-conspirators and collaborators in Trump's coup plot. So for reasons of self-preservation they are sabotaging even the most meager attempts to hold hearings or investigations.

The vast majority of Americans want to see those who attacked the Capitol punished for their crimes. It appears that some participants will be made into examples and imprisoned for serious crimes. Unfortunately, that also means the vast majority of Trump's forces will either go unpunished or receive the weakest of consequences.

As I warned in an earlier essay here at Salon, "to not punish Donald Trump, members of his inner circle, and his loyalists and other followers who planned, executed, or otherwise participated in his coup attempt and attack on the Capitol to the maximum degree allowed by law is to all but guarantee another such attack on the country's democracy."

Public hearings and investigations including a truth commission are also necessary to prevent a repeat of the events of Jan. 6, or something much worse. The facts must be exposed and committed to public memory. Lessons must be learned so that Trumpism and other forms of American neofascism can be identified and defeated early in their formation.

In the weeks since the horrific events of that day there have been many public warnings about what will happen if those who planned and perpetrated the attack are not properly punished and if the broader right-wing authoritarian movement in America is not stopped.

Borrowing from the therapeutic language of addiction, historian Timothy Snyder phrases it this way:

The invasion of the Capitol was a crisis, and a crisis is an opportunity. An addict might admit that he has a problem before more people get hurt. Sometimes, though, the addict misses the chance, and salves his feelings with the drug. That can feel like the only way to get through the moment of uncertainty: punch holes in the skin until that moral queasiness passes. This, unfortunately, is just what state-level Republican elected officials have done since January 6th. They are binging on voter suppression. Right now Republican state legislators are supporting over two hundred bills designed to make voting more difficult.

Philosopher Henry A. Giroux cautions about the perils of "organized forgetting" and historical amnesia:

Historical amnesia also finds expression in the right-wing press and among media pundits such as Fox News commentators Tucker Carlson and Sean Hannity, whose addiction to lying exceeds the boundaries of reason and creates an echo chamber of misinformation that normalizes the unspeakable, if not the unthinkable. Rational responses now give way to emotional reactions fueled by lies whose power is expanded through their endless repetition. How else to explain the baseless claim made by them, along with a number of Republican lawmakers, right-wing pundits, and Trump's supporters who baselessly lay the blame for the storming of the US Capitol on "Antifa." These lies were circulated despite of the fact that "subsequent arrests and investigations have found no evidence that people who identify with Antifa, a loose collective of antifascist activists, were involved in the insurrection."

Social theorist Umair Haque explains why appeasing fascists and other authoritarians only encourages their assaults on democracy and normal society:

At this juncture, you might interject. "But we have to make peace with fascists!" Do we? We don't. This is a big, big mistake in thought — and Biden is leading a nation to making it, collectively. ...
The GOP is becoming America's Nazi Party because the Democrats are letting it. The Democrats have all the power it's possible to have in America's political system. If they wanted to hold Nuremberg Trials, they could begin tomorrow. If they wanted to send Trumpists to be tried by the International Criminal Court, it could happen next week.
It is not happening, and it's not going to happen, because the political choice has been made not to hold Trumpists accountable for their abuses of power. But that choice also licenses the GOP to move ever further right.

Former senior national security officials continue to warn that the U.S. needs to have proper hearings and investigations into the events of Jan. 6 in order to prevent another such a domestic terrorist attack from happening again.

Considered in total, the events of Jan. 6 are knowable, not mysterious. To ignore them is to engage in a dangerous type of organized forgetting and intentional collective amnesia.

Closing our eyes will not make American neofascism go away.

If you run away from American neofascism, it will follow you.

If you try to hide from American neofascism, it will find you.

It you try to pretend that American neofascism and the Age of Trump did not happen, it will all happen again.

The United States is a young country. As Gore Vidal famously observed, "We are permanently the United States of Amnesia. We learn nothing because we remember nothing." Some Americans, such as Black people and Native Americans, as a result of their historical experience have not succumbed to amnesia and denial. Their pain and triumph, and their deep understanding of power and its consequences, grounds them in time. But as a whole culture plagued with myths of personal and collective reinvention, Americans all too readily believe that denial and avoidance are viable ways to solve our nation's problems.

Fascism cannot be defeated that way. It must be confronted at every turn. Amnesia is not a defense. It is a form of surrender.

The host of "Late Night with Seth Meyers" took a closer look on Monday at how the GOP refuses to move on from Donald Trump.

"The Republican Party has decided that its path back to power is complete and total fealty to Donald Trump and they're purging anyone who refuses to repeat his lies about the 2020 election -- no matter how destructive it is for the country," Meyers said.