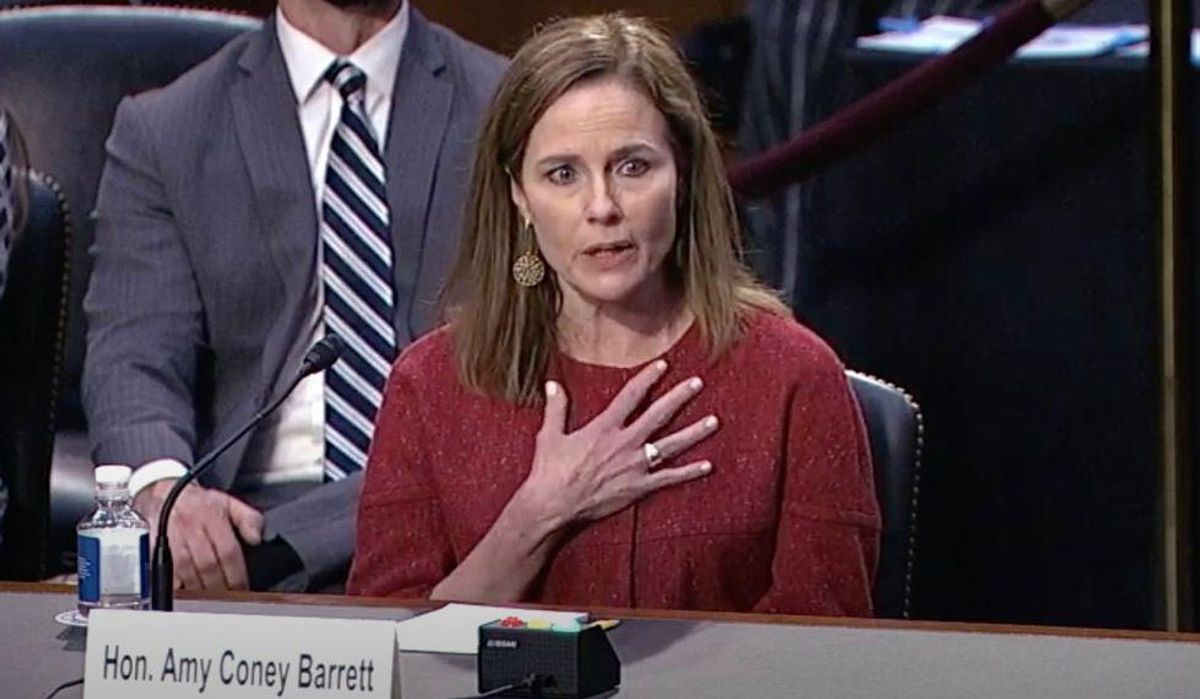 Speaking to MSNBC on Monday, legal analysts attacked Justice Amy Coney Barrett for her "partisan hackery" while she was speaking to Mitch McConnell's political school in Kentucky.

Dahlia Lithwick, Slate's legal correspondent, related Coney Barrett's speech to being like something out of "The Onion." She noted it was like the "Casablanca" police officer pretending he didn't know gambling was going on in the place he'd been gambling.

"That's just straight-up trolling," said Lithwick. "One thing I really noticed and I think kind of got lost in the irony today is the way in which she went to an event, as you said, it was a Mitch McConnell event, and the press was not advised that it was happening. There are no recordings of it. The handful of reporters that were there were allowed to take notes."

She noted a local reporter and her colleagues were moved to the back of the room while complaining the press misreports what the Supreme Court does.

"It is the most astonishing lack of self-knowledge to get up and say that you shouldn't listen to reporters, you should read our incredibly nuanced opinion that was a page-and-a-half last week in the abortion case, and just don't trust the press because they're lying to you, trust me, we're non-partisan. It is next-level cynical," she said.

Elie Mystal unleashed on the Associated Press for essentially taking Coney Barrett's speech notes and curating it into an article instead of calling out the hypocrisy of her comments.

The AP "just dutifully copied her notes, sent out her press release, put out that headline without the context of her dripping hypocrisy in the headline. That headline should have been 'Partisan Hack Afraid People Might Notice Hackery,'" he suggested. "That would have been an accurate headline. But the press didn't do that, did they?"

He went on to attack Coney Barrett for her entire career being built on the press' unwillingness to call her out or even accurately report her.

"In her first year on the Supreme Court, as you pointed out, she's taken away labor rights, she's taken away voting rights, she's taken away abortion rights," Mystal continued. "She promised to do this to get the job! And yet the mainstream media refused to call her out on it then and even today as she stands there and basically spits in their face they still write the headline that she required -- that she desired them to write. That's the real -- you know, those people need to also like grow up and take some personal responsibility for what they're doing to the country."

After showing a video of Justice Stephen Breyer claiming he doesn't want to "die on the court," Lithwick asked if the justices are so far removed from reality that they believe they're magic because they can have lunch with each other without stabbing another justice in the eye with a shrimp fork.

"Why do we have to collude with that?" she asked. "And why is it that we're expending energy talking about that instead of the fact that the Court is just decimating, as Elie has said, voting rights, reproductive rights, union rights in front of our very eyes? Isn't that the conversation we should be having?"

Mystal agreed, noting that it isn't that complicated to get correct.

"Do you require a duck to be self-aware that it's a duck before you call it a duck?" he asked. "I mean, is that really the level that we're at? Because that's where the press seems to be. Unless the duck says 'Quack quack, I'm a duck,' then we can't call it that. If the duck thinks he's actually rich and is a media mogul like Scrooge, then the media has to say Scrooge today, you know, wanted some bread. Like that's how they report it. It's very frustrating."