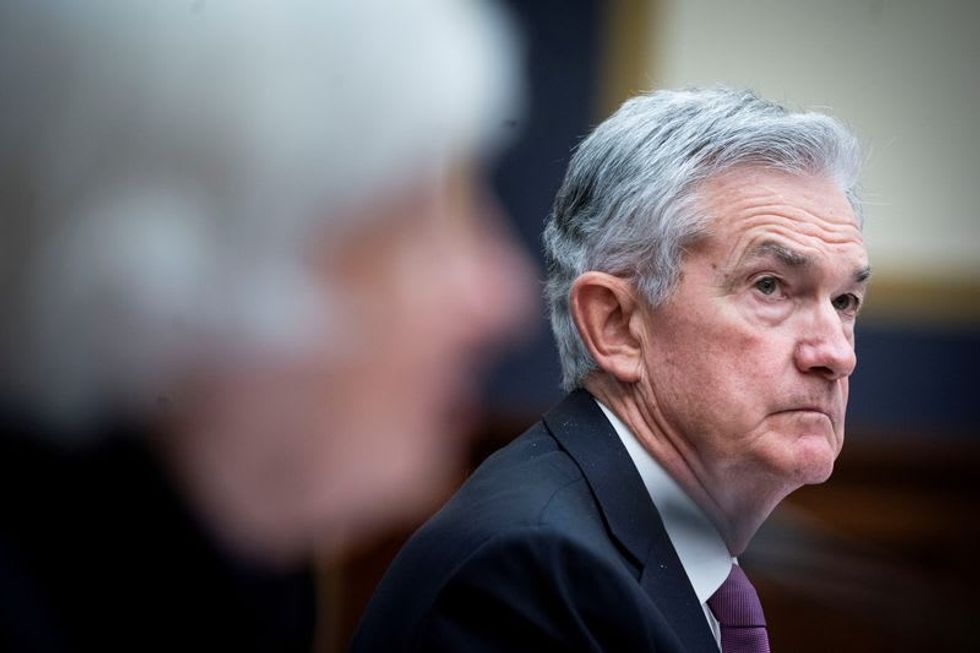 NEW YORK (Reuters) - Jerome Powell may still be the clear favorite to get renominated as Federal Reserve Chairman, but some investors are considering the long-shot alternative should there be a surprise change.

Powell's odds in betting markets have fallen following sharp criticism of his performance by progressive Democrats and a trading scandal among Federal Reserve officials. [L1N2R020J]

Online betting website PredictIt now gives https://www.predictit.org/markets/detail/7398/Whom-will-the-Senate-next-confirm-as-Chair-of-the-Federal-Reserve Powell a 76% chance of being confirmed by the U.S. Senate, down from a 90% chance on September 12 although up from a 61% chance in late September, while the odds that Federal Reserve Governor Lael Brainard will be nominated have increased to 18% from a low of 6% in September.

Brainard, who was nominated to the Fed board by former President Barack Obama in 2014, is widely seen as more dovish than Powell in part because of her push to retain super-easy monetary policy until there is more progress on job recovery. https://www.reuters.com/business/feds-brainard-more-progress-recovery-ahead-though-still-far-goals-2021-06-01

Should Brainard be chosen as the next Fed chair, the Fed could extend its dovish policies and push back the central bank's timeline for raising interest rates beyond 2022, but that could result in a series of rapid rate increases down the line if high inflation persists and the Fed is behind the curve, investors and analysts said.

"You could see a different path of monetary policy with a Brainard-led Fed" that pushes back initial interest rate hikes and follows with a shorter tightening cycle, said Paul Herbert, Managing Director at Harbor Capital Advisors, who expects Powell to be renominated but is preparing to hold shorter duration bonds for longer in the case of a Brainard-led Fed.

The White House has not chosen any fixed timetable for President Joe Biden to make a decision on Fed personnel but has said Biden "will engage with his senior economic team in a careful and thoughtful process...in a timely manner." Biden has not made a decision but some of his aides are supportive of Powell, according to people familiar with the matter.

Whoever Biden nominates will first be vetted by the Senate Banking Committee before going to a vote in the full Senate, where a simple majority would be needed.

Powell, a Republican, has done more than any recent Fed chair to cultivate relationships on Capitol Hill, meeting regularly with members of both parties. At least one Democratic member of the Senate Banking Committee, Jon Tester of Montana, has endorsed Powell for a second term, while one other Democrat, Elizabeth Warren of Massachusetts, has said she would oppose him. Most observers believe Powell would get the backing of most, if not all, of the Republicans.

Nicholas Colas, co-founder of DataTrek Research, wrote in a research note that if "history is any guide, we should know the outcome in the next few weeks," noting that prior announcements have come in October and November.

"We continue to stare in admittedly morbid fascination at the PredictIt odds for the next Federal Reserve Chair," wrote Colas, adding that "we think Powell will keep his job. It makes little sense to switch the proverbial horses midstream."

While the Federal Reserve likely will have begun tapering its emergency-level support of the bond market by that time, a change would also increase the risk that markets misinterpret the Fed's policy outlook in the year ahead, said Jason England, global bonds portfolio manager at Janus Henderson.

"You would see volatility in markets because there would be less certainty around monetary policy," he said.

Biden's decision in naming a Fed Chair nominee comes as progressive and moderate Democrats are squaring off over a landmark reconciliation bill and infrastructure bill that are at the heart of the administration's economic agenda.

Warren has called the U.S. Securities and Exchange Commission to investigate trading by top U.S. central bankers, including that of two Fed bank presidents who resigned after public outcry over their transactions.

The accommodative tilt of the Fed will not likely change considerably whether Biden nominates Powell or Brainard, said Mike Gladchun, director of U.S. rates trading at Loomis Sayles.

"It needs to be appreciated just how dovish the path that Powell has the current Fed on," he said.