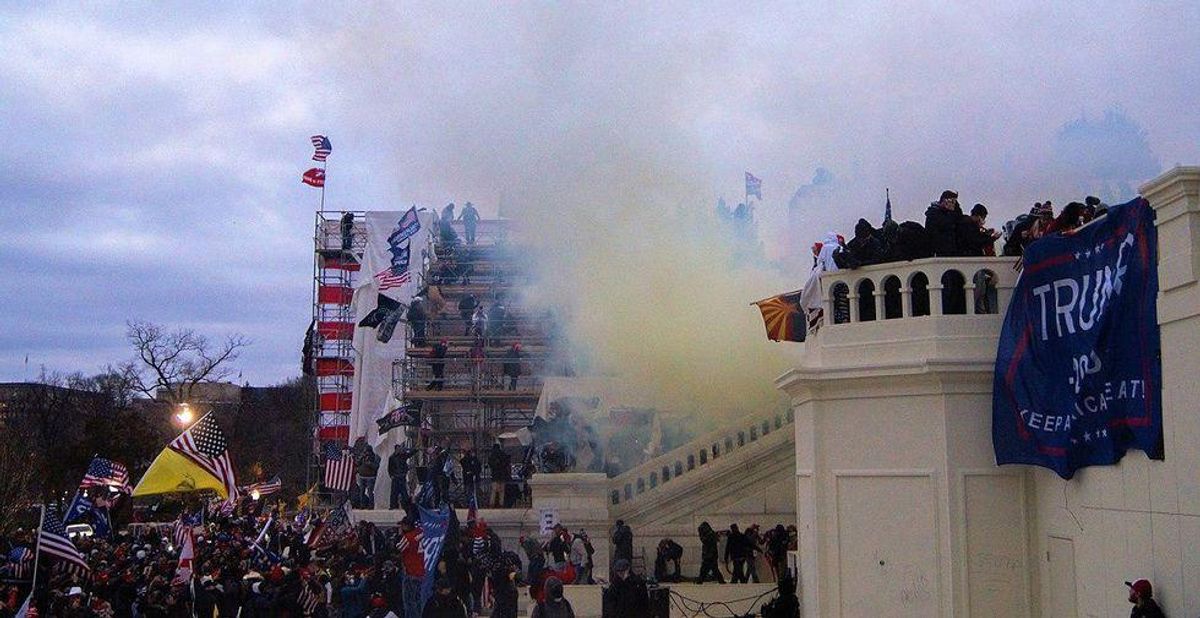 Teargas outside the U.S. Capitol Building on January 6, 2021, Tyler Merbler

Historically speaking, right-wing Republicans are strident defenders of corporate America. Economist Milton Friedman argued that corporations had no obligation to anyone but their shareholders, and the late talk radio host Rush Limbaugh equated anti-corporatism with anti-capitalism — that is, before he flip-flopped and endorsed former President Donald Trump's pseudo-populism. And in 2021, railing against "woke corporations" is a badge of honor for Sen. Josh Hawley of Missouri and other Trumpian GOP wingnuts. Never Trump conservative Amanda Carpenter takes an in-depth look at the strident "anti-corporate rhetoric" coming from the far right in an article published by The Bulwark on April 27 — stressing that it underscores the "paranoid, vindictive" nature of the "post-Trump GOP."

The message of Republicans who have been railing against "woke capitalism," according to Carpenter, is "Screw with our elections…. and we'll screw your trusts, tax cuts, loopholes and credits."

"Republicans try to pretend that their bullying is something more principled — that it's anti-woke corporate populism — but in reality, it's little more than grievance weaponized as policy," Carpenter explains. "But don't laugh. The way things are going, this could be the next grand unifying theory for the GOP."

Carpenter points out that everyone from Hawley to Fox News' Tucker Carlson to Sen. Ted Cruz of Texas has been lambasting Corporate America for being "woke." Cruz, who once employed Carpenter as his communications director, came up with the hashtag #GoWokeGoBroke.

"The GOP's clash with business over the last few weeks is different in two ways from what came before," Carpenter observes. "First, on the business side, this case is different because the 'activism' in question — the holding back of donations, the criticism — is not related to some matter of policy or party, but rather, to election administration and the preservation of democracy itself. And on the GOP's side, this case is different because it is based solely upon the politics of retaliation."

The Republicans who have been raging against corporations, Carpenter notes, are upset because the companies have acknowledged Joe Biden as the legitimate president of the United States — rejecting Trump's false claims of voter fraud — and spoken out against GOP voter suppression bills.

"Republicans are proposing punitive action in direct response to political speech from companies about the post-election Big Lie, the attempts to overturn the 2020 election, and Georgia's recently enacted voting law," Carpenter observes. "Threatening to use the power of the state to crack down on that speech is repulsive…. This anti-corporate rhetoric has captured the paranoid, vindictive imagination of the post-Trump GOP."

By "post-Trump GOP," Carpenter isn't saying that the former president is no longer influential in his party. Most Republicans are afraid to say one word against him. Rather, Carpenter means "post-Trump White House GOP" or "post-Trump presidency GOP." And she stresses that the GOP, following Trump's presidency, has maintained his mean-spirited nature.

"There is a culture clash underway," Carpenter writes. "Hawley and the rest of the anti-woke crusaders are saying that Corporate America must heed their 'values' or get smashed — just like Hawley's rioters smashed up the Capitol when the Democrats didn't agree with their 'values' about 'election integrity.' It's all the same brute idea. Comply with my party, or get the fist."