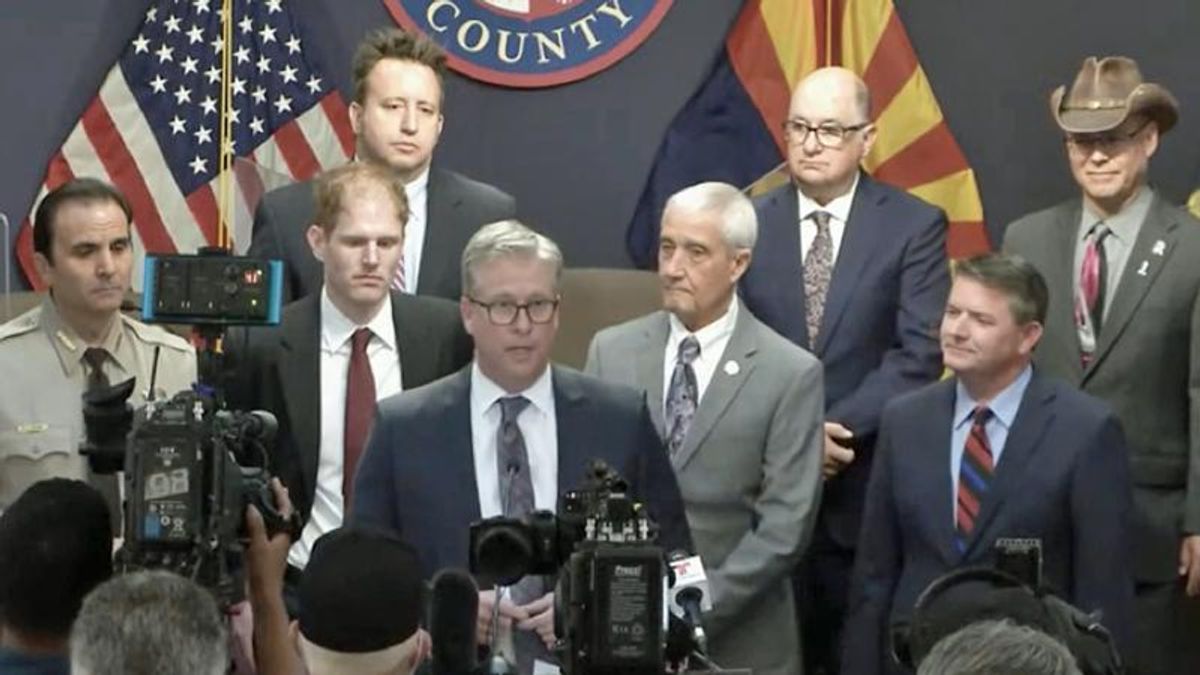 Already the U.S. Dept. of Justice has notified the company performing the recount, Cyber Ninjas, that it is watching their actions and warning them their actions may violate the law.

The Maricopa Board of Supervisors – which is made up of four Republicans and just one Democrat – Monday did not hold back, blasting Senate President Karen Fann, accusing her of lying, among other disturbing actions.

Fann, in a false accusation picked up and repeated by Donald Trump over the weekend, claimed Maricopa County deleted an entire database. The accusation was made either out of ignorance or political vengeance, or both, but the damage has been done.

The County responded today, calling the accusations "false, defamatory, and beneath the dignity of the Senate."

"We demand that you immediately rescind your false and malicious tweet," the county tells Senate President Fann in a 13-page letter, "asserting that Maricopa County 'spoiled evidence' in the days before we provided the server to the Senate. Your tweet, which relies on the 'modified date' shown in the screenshot as evidence of wrongdoing, is demonstrably false; the only thing it does demonstrate is your auditors' incompetence. Their stunning lack of a basic understanding for how their software works is egregious and only made worse by the false tweet sent defaming the hardworking employees of Maricopa County."

The Senate, Maricopa County adds, "is only interested in feeding the various festering conspiracy theories that fuel the fundraising schemes of those pulling your strings."

You have rented out the once good name of the Arizona State Senate to grifters and con-artists, who are fundraising hard-earned money from our fellow citizens even as your contractors parade around the Coliseum, hunting for bamboo and something they call "kinematic artifacts" while shining purple lights for effect. None of these things are done in a serious audit. The result is that the Arizona Senate is held up to ridicule in every corner of the globe and our democracy is imperiled.

"Your various questions about our election procedures reveal a serious lack of understanding of election law."

"a spectacular lack of understanding on your part"

"we cannot give you a password that we do not possess any more than we can give you the formula for Coca Cola. We do not have it; we have no legal right to acquire it; and so, we cannot give it to you."

"We will not be responding to any additional inquiries from your "auditors". Their failure to understand basic election processes is an indication you didn't get the best people to perform in your political theatre. We have wasted enough County resources. People's tax dollars are real, your 'auditors' are not."

But perhaps among the most disturbing accusations Maricopa County makes, is, as The Guardian's Sam Levine reports, Cyber Ninjas is "just straight miscounting ballots." Read this short tweet:

Jack Sellers, the Chairman of the Maricopa County Board of Supervisors, concluded a meeting Monday afternoon by announcing to the Arizona Senate, "Finish your report and be ready to defend it in a court of law."