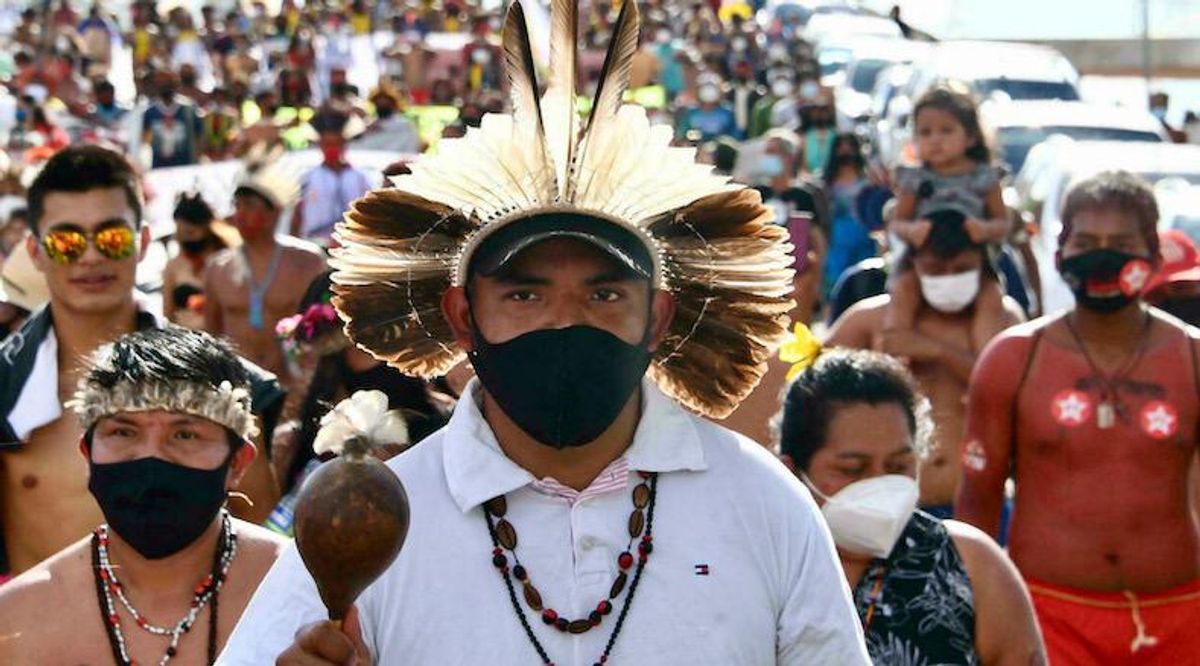 Newly armed with voting rights, indigenous peoples have come to the world's leading conservation congress meeting in the French city of Marseille both hopeful and wary.

They have demands, and will not go quietly into the night, their representatives say.

"It makes no sense for consultants and companies to come to teach us how to protect what we have always successfully protected," said Jose Gregorio Diaz Mirabal of COICA, which represents more than two million indigenous people across nine Amazon nations.

Their boldest proposal is for a measure to ensure that 80 percent of the Amazon is declared a protected area by 2025.

The reasoning is simple.

"Half of [tropical] forests, and 80 percent of biodiversity" in the world are found in indigenous territories, said Peter Seligmann, a veteran conservationist who set up an NGO -- Nia Tero (Our Land) -- run in part by indigenous leaders.

Walter Quertehuari is a leader of the Wachiperi people in southeastern Peru. His commune in the Amarakaeri reserve is recognized on the IUCN Green List for its work in protecting biodiversity.

Unable to attend the International Union for the Conservation of Nature (IUCN) meet in person due to Covid restrictions, Quertehuari reminded participants by video link that his people have safeguarded more than 400,000 hectares of forest for more than 15 years.

By staving off the deforestation taking place all around them, he explained, his people have not only protected a crucial biodiversity hotspot but prevented planet-warming CO2 from leaching into the atmosphere.

Now it's time for a payday.

"We are talking about how carbon credits from the reserve can be sold," he told the IUCN's first Indigenous Summit.

Paying to restore or maintain healthy forests in order to fight climate change is not a new idea, and has been embedded in the UN climate convention for many years.

But such initiatives have been plagued with accounting and oversight problems, and some environmentalists say the concept is fundamentally flawed.

"There are indigenous communities that say: 'As soon as you put a monetary value on a tree, someone is going to want to cut it down, because that's the story of our relationship with Westerners'," said Seligmann.

But "indigenous communities have the right to self-determination," he added.

The full integration of indigenous peoples into the IUCN has been a lengthy and tortured process, sources within and outside the organization acknowledge.

"We have long been invited to attend, but indigenous peoples do not see themselves as conservation organizations," Victoria Tauli-Corpuz, a former UN special rapporteur from the Philippines, told AFP.

"We are nations, we are peoples," she added.

"And besides, membership is so expensive. Where do they think indigenous peoples can find the money?"

IUCN members -- some 1,400 government ministries, research institutes and non-governmental organizations large and small -- pay anywhere from 300 to 20,000 Swiss francs (about $300 to $21,000), depending on their size and resources. "Since the 1980s there have been indigenous group members," said Enrique Lahmann, director of the World Conservation Congress. "Inuits were among the first."

But none of these groups had the right to vote on important measures and propositions that have often served as the backbone for UN treaties or conventions.

After years of discussion and debate, it was agreed that indigenous peoples would have a classification of their own.

"This is the first time that the IUCN has made changes within its categories" Lahmann said.

Due do Covid, there are far fewer indigenous activists than in the past at the congress, which usually attracts upward of 10,000 participants.

But indigenous representatives can now participate fully in all deliberations, and when it comes time to vote they will have the same status as NGOs.

In 2012, Relmu Namku, from the Mapuche people in Argentina, was charged with attempted murder after blocking the entrance to an oil field. At the end of a harrowing trial, she was acquitted in 2015.

She came to Marseille with a clear objective.

"We are very critical of the way conservation has been managed all these years," she explained to AFP.

"Historically, protected areas have been created through the usurpation of the territories of indigenous communities," she said.

Being part of the IUCN, with voice and vote, "can serve to put pressure on our governments," she added.

Not all indigenous peoples are on the same page. Navajos in the United States, for example, bought coal mines exploited for decades on their land and now operate them for profit. And there are other hurdles ahead.

Even with good intentions, there remains mutual misunderstanding or mistrust across the divide between science-based and traditional conservation.

"Some [traditional] communities are reluctant to share their knowledge," acknowledged Aissatou Dicko, an indigenous representative from Burkina Faso.

"And there's a hesitancy on the part of scientists because they don't know how to measure the reliability" of what indigenous peoples tell them, he said.