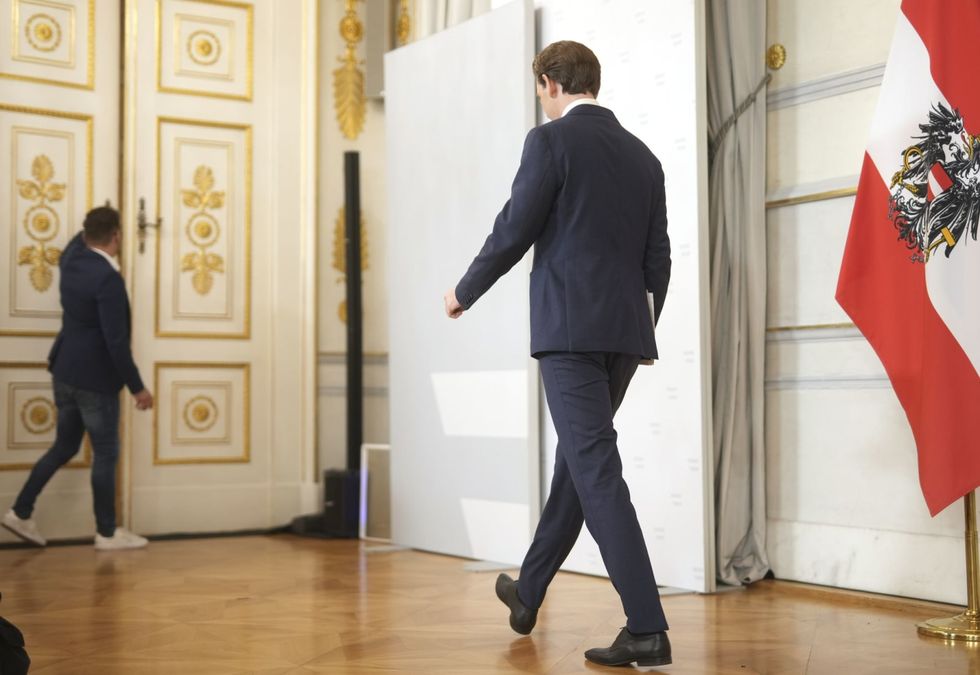 Austrian Chancellor Sebastian Kurz leaves after announcing his resignation during a press conference at the Chancellery in Vienna. Georg Hochmuth/APA/dpa

Austrian Chancellor Sebastian Kurz is stepping down amid allegations of financial impropriety, thereby avoiding a vote of no confidence and a potential government collapse.

The move comes after Austrian prosecutors named the conservative politician as a suspect in a corruption case involving the use of public funds to pay for positive media coverage.

"My country is more important to me than myself," Kurz said after announcing that he was resigning to keep the coalition government led by his conservative OeVP-led party intact.

Austria Foreign Minister Alexander Schallenberg of the OeVP is to take over as chancellor.

Kurz was due to face a vote of no confidence at a special parliamentary session on Tuesday.

It was likely that he would have been removed from office, with even his Green coalition partners considering the 35-year-old unfit for the position and urging his resignation.

Anti-corruption investigators searched the offices of Kurz, his OeVP party, the Finance Ministry and a media house on Wednesday.

According to the Economic and Corruption Prosecutor's Office (WKSTA), there are indications that, from April 2016 onwards, funds from the ministry were used to publish "party-politically motivated, sometimes manipulated polls by an opinion research company" in the interest of Kurz, who was then foreign minister.

Kurz had previously said that any suspicion of corruption related to his rise to power was unfounded.

He did not announce a complete withdrawal from politics. He is to remain OeVP leader and move to parliament as parliamentary group leader, he said.

Earlier on Saturday, the Greens failed in their attempt to pass the national budget before a government collapse. Important projects, including the purchase of Covid-19 vaccines, depend on the budget.

With Kurz out, the process should take longer as the package is now considered obsolete.

In the run-up to Kurz' decision, Austria's Social Democrats (SPOe) had been thought to be considering talks to form a four-party coalition with three other parties including the controversial far-right Freedom Party of Austria (FPOe).

In order to do so, the Social Democrats would have had to reverse their public commitment not to work with FPOe at the federal level.

Social Democrat leader Pamela Rendi-Wagner appeared to signal this was an option when she told public broadcaster ORF that "extraordinary situations call for extraordinary measures."