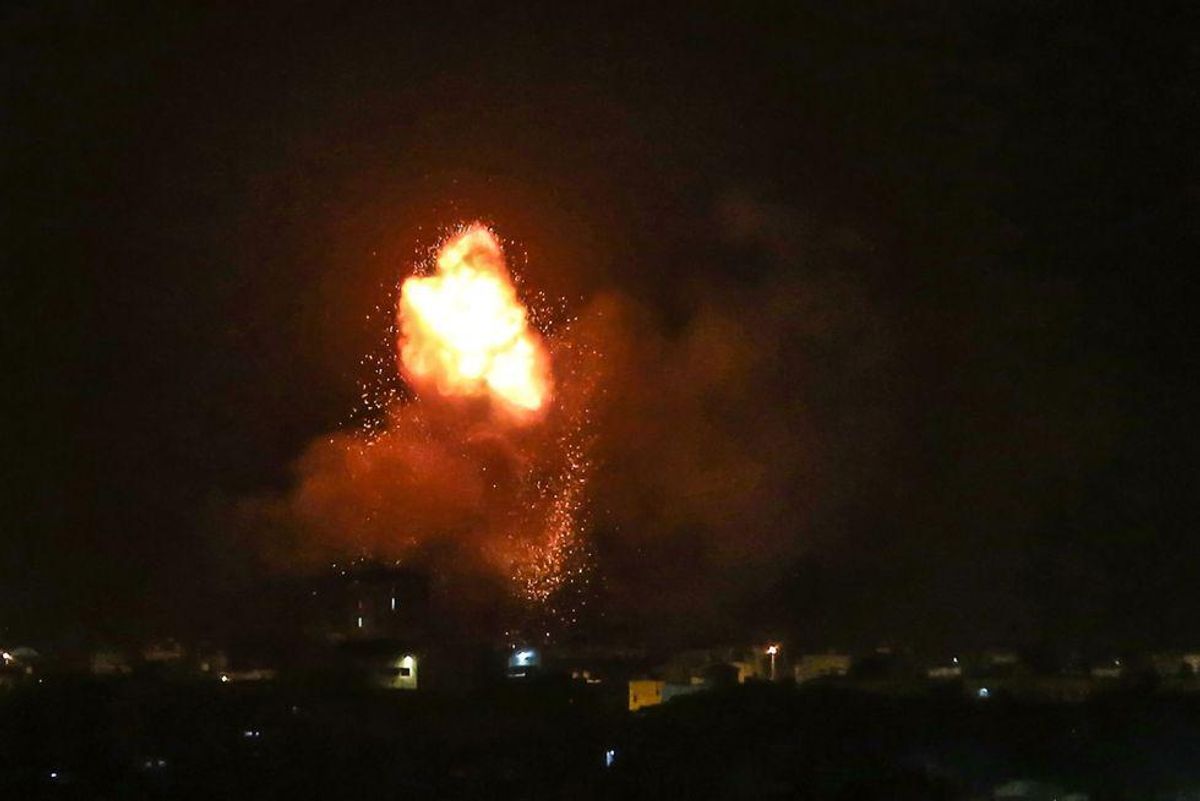 MEE noted that the bombing damaged "dozens of adjacent buildings, including Gaza's main coronavirus laboratory, an orphanage, a female high school, and the Palestinian Ministry of Health offices."

"If the Ministry of Health is not safe, then there is no safe place in the Gaza Strip," said Abu Hamed Abufoul, an eyewitness to the airstrikes. "This is a war crime and the world cannot remain silent."

"Targeting the Ministry of Health building, al-Remal Clinic, and the medical staff is a heinous crime aimed at preventing the ministry from continuing its humanitarian work in saving the lives of the wounded and providing health care to citizens," al-Rish said. "The international community must hold the occupation accountable for its heinous and ongoing crimes against medical personnel and health institutions."

"Horrifying," MSNBC's Mehdi Hasan tweeted in response to the bombing. "It was bad enough when Palestinians in Gaza weren't able to get vaccinated, but now to reportedly lose their only coronavirus testing lab is... beyond words."

The airstrikes came shortly after Israeli bombs killed two of Gaza's senior doctors, including one of the officials leading the besieged territory's response to the coronavirus pandemic.

As the Washington Post reported last week, Israel's latest assault—which has thus far killed more than 200 people and injured at least 1,300 in the occupied coastal strip—began as coronavirus infections and deaths in Gaza had started to decline after reaching record highs in April.

"The horrendous attacks on civilians and civilian infrastructure that we are witnessing in Gaza are inexcusable and intolerable."
—Ely Sok, Médecins Sans Frontières

"The violence has had an immediate effect: Medical facilities, triaging the flood of new injuries, have for the most part paused coronavirus testing and vaccinations," the Post noted. "And a crop of hospitalized Covid-19 patients who were nearing recovery were released over the past two days to make room for the growing number of war wounded."

On Sunday, a wave of Israeli airstrikes in Gaza City that killed 42 people also damaged a Médecins Sans Frontières (MSF) clinic that treats trauma and burn wounds, prompting outrage from the organization's staff.

Ely Sok, MSF's head of mission for the occupied Palestinian territories, said in a statement Monday that "the horrendous attacks on civilians and civilian infrastructure that we are witnessing in Gaza are inexcusable and intolerable."

"The number of wounded and displaced people is mounting while additional humanitarian personnel and supplies still cannot enter Gaza," said Sok. "The local health authority is reporting being 24 hours away from running out of blood bags, meaning they cannot transfuse patients with blood, a key intervention in caring for war-wounded."

"Israel needs to stop these attacks in the heart of Gaza, as we have seen time and again that they kill civilians no matter how 'targeted' they are, as in such a densely populated place it is not possible to limit the effects of the bombing," Sok continued. "Safe access for humanitarian staff and supplies also needs to be urgently arranged."

During a Monday call with Israeli Prime Minister Benjamin Netanyahu—who has pledged to keep up the bombardment of Gaza indefinitely—U.S. President Joe Biden expressed support for a cease-fire amid growing pressure from the international community. A day earlier, the U.S. single-handedly blocked the release of a United Nations Security Council statement demanding an immediate cease-fire.

"Finally!" U.S. Rep. Ilhan Omar (D-Minn.) tweeted in response to Biden's new position. "Our delay in supporting a cease-fire has caused the slaughter of children and destruction of lives. Now Biden has to push for an end to the occupation."