'So much death': LA hospital reels at center of COVID storm 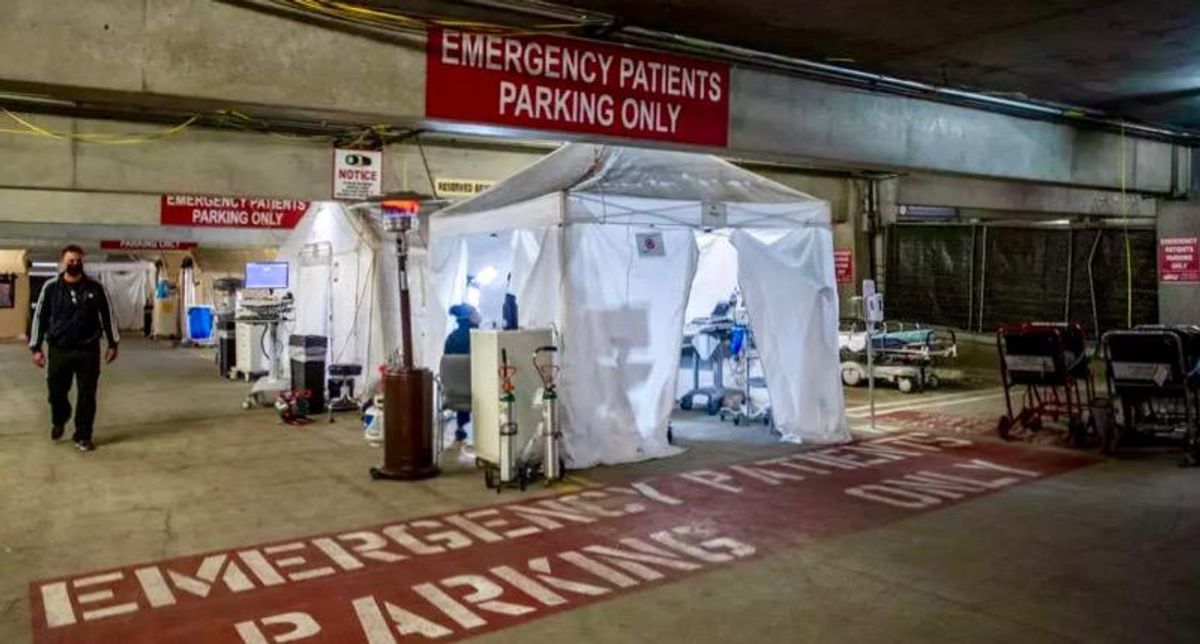 Deep within a South Los Angeles hospital, a row of elderly Hispanic men lay hooked up to ventilators -- their bodies resting in induced comas -- while nurses clad in spacesuit-style respirators checked their patients' bleeping monitors in the otherwise eerie silence.

The intensive care unit in one of the city's poorest districts is well-accustomed to death, but with Los Angeles now at the heart of the United States's Covid-19 pandemic, medics say they have never seen anything on this scale.

"It's hard. We're human, and we're trying our best," said nurse Vanessa Arias. "But we've seen so much death during the past few weeks."

Barely moments earlier, she had informed another tearful family that their mother had just passed.

"We're in the midst of the eye of the storm," she said.

Martin Luther King Jr Community Hospital, sandwiched between the neighborhoods of Watts and Compton, is stretched far beyond capacity by an unrelenting influx of coronavirus patients.

When AFP visited this week, it had converted a chapel and former gift shop into overflow and examination rooms, created new makeshift ICU beds in the post-surgery ward, and built field hospital tents outside its front entrance.

The 131-bed hospital had 215 patients, the majority with Covid. National Guard medics had just arrived to ease the strain on overwhelmed doctors and nurses.

The US has had more coronavirus cases and deaths than any other country in the world. On Thursday, it set a new record of nearly 4,000 Covid deaths in one day, bringing the country's overall total to more than 364,000.

The country's confirmed number of infections was 21.5 million.

At the MLK hospital, many of the patients are essential workers, highly exposed at jobs in grocery stores and public transport, and living in crowded homes where isolating is near-impossible.

Even before Covid, the community suffered from epidemic levels of preventable and chronic disease, including diabetes, obesity, heart disease and sepsis.

"We're seeing whole families, groups of them, getting sick at the same time," said Arias, who like many MLK staff is herself Hispanic and grew up locally.

"I could have been one of these people... It's very unfortunate to see people that look like you die."

'Worst I've been to'

The infection numbers affecting Los Angeles since November have been staggering, even after 10 long months of pandemic in the nation's second largest city.

A record 8,000 county residents are currently hospitalized with Covid. Around one in 12 have already been infected, and one in five of those tested recently are positive. More than 11,000 have died.

"I was also in New York when it was really bad. But this has probably been the worst I've been to," said Taylor Reed, a 24-year-old traveling nurse, who also worked in Washington, DC and Minnesota last year.

California was initially praised for its handling of the pandemic in the spring, but skyrocketing cases have sent most of the state back under "stay-at-home" orders.

Ambulance workers have been told to stop transporting some patients with extremely low survival chances.

California hospitals were this week ordered to postpone non-urgent surgeries and to accept Covid-19 patients from elsewhere in the hard-hit state if they have space.

Still reeling from a spike caused by Thanksgiving gatherings that spread infections, state public health chiefs expect the Christmas coronavirus "surge upon a surge" to peak in the next two weeks.

According to Batchlor, MLK's disadvantaged location gives it one key strength.

Most have now received at least one dose of the new Pfizer vaccine.

But Batchlor still fears for her dedicated employees, who are stretched thinner than ever as more patients continue to arrive.

"When I talk to our doctors and nurses working in our intensive care unit, they continue to assure me that they're on top of it," she said.

"But I'm worried about how long they've been in this situation and under this pressure."

For Arias, keeping each patient's family members "in the loop" despite near-daily deaths helps to "makes me always feel fulfilled."

But shortly before AFP's visit, she called the relatives of an elderly Hispanic lady who was rapidly deteriorating.

"As soon as I thought she was going to expire, I called them to rush over here," said Arias, hopeful they might arrive in time to say goodbye.

Clackamas High School in Oregon was vandalized last month in what some people described as a hate crime, and now some of the students who were involved are facing death threats, Fox 12 reports.