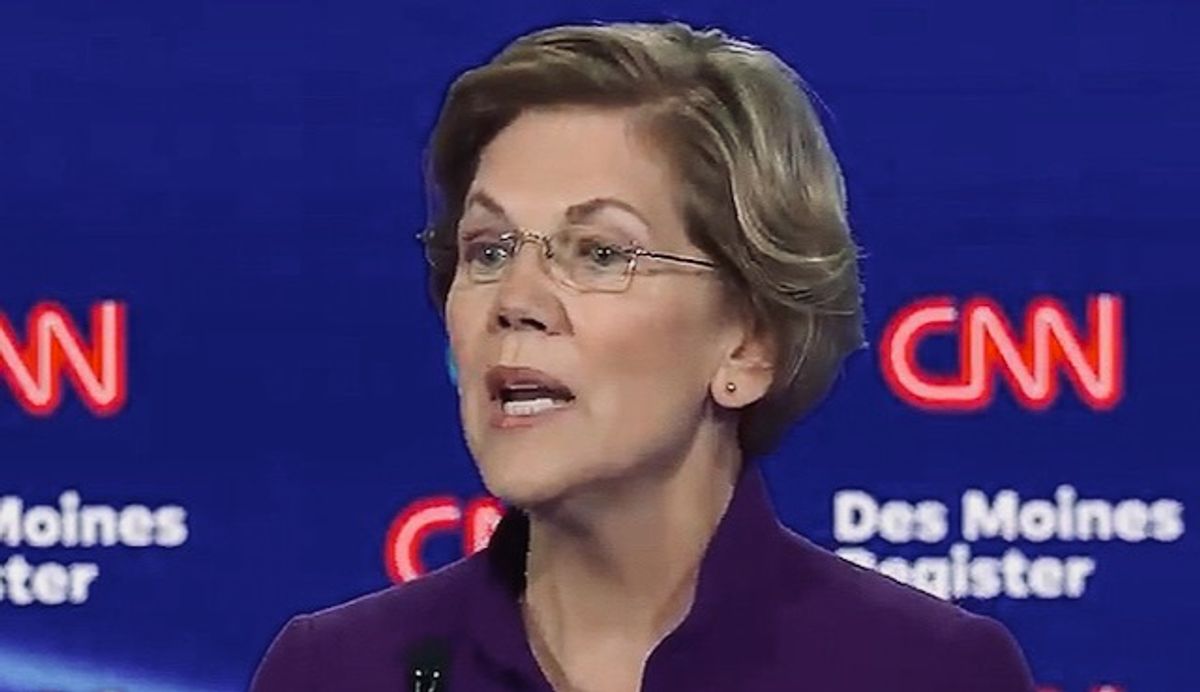 Citing the explosive growth of inequality during the coronavirus crisis—which has followed more than four decades of upward redistribution and concentration of wealth at the top—Sen. Elizabeth Warren on Monday introduced a bill to tax a small portion of the wealth of the richest 100,000 households in the United States to help fund President Joe Biden's Build Back Better agenda.


"A tax on wealth above $50 million is very popular, and is even more popular when it funds priorities like child care, healthcare, and jobs in our communities."
—Stephanie Taylor, PCCC

"As Congress develops additional plans to help our economy," Warren (D-Mass.) said in a statement, "the wealth tax should be at the top of the list to help pay for these plans because of the huge amounts of revenue it would generate. This is money that should be invested in child care and early education, K-12, infrastructure, all of which are priorities of President Biden and Democrats in Congress."

Called the Ultra-Millionaire Tax Act of 2021 (pdf), the legislation would levy a 2% annual tax on the net worth of households and trusts above $50 million, plus a 1% annual surtax on billionaires—bringing in at least $3 trillion in revenue over 10 years without raising taxes on the 99.95% of American households worth less than $50 million, according to a recent analysis (pdf) by University of California, Berkeley economists Emmanuel Saez and Gabriel Zucman.

"The Ultra-Millionaire Tax Act will narrow the country's extraordinary wealth gap, raise trillions of dollars from the super-wealthy, and help fund the recovery our nation so desperately needs," said Frank Clemente, executive director of Americans for Tax Fairness. "We've calculated that U.S. billionaires have increased their wealth by nearly 50% since the pandemic began while tens of millions of people have lost their jobs, can't pay their rent, and go to bed hungry at night."

In addition to claiming the lives of more than 500,000 people in the U.S., the ongoing Covid-19 pandemic has "shone a harsh light on America's staggering inequalities," said Susan Harley, managing director of Public Citizen's Congress Watch division. "The fortunes of the richest Americans are ballooning while huge swaths of America suffer."

The Ultra-Millionaire Tax Act, according to Chuck Collins, director of the Program on Inequality at the Institute for Policy Studies and author of The Wealth Hoarders: How Billionaires Pay Millions to Hide Trillions, "will capture a portion of the tremendous windfall that billionaires have reaped during the pandemic."

In addition, Collins said, the wealth tax "will both restore lost fairness and progressivity to the U.S. tax system and will also slow the build-up of democracy-distorting concentrations of wealth and power."

Decrying "the hyper concentration of wealth among a tiny number of multimillionaires and billionaires," Rep. Brendan Boyle (D-Pa.), who joined Warren and Rep. Pramila Jayapal (D-Wash.) in introducing the bill, pointed out that "wealth inequality is at its highest level since the Gilded Age."

While it is true that ordinary families have struggled for the past year "to put food on the table, keep the heat on, and pay the rent during this devastating economic crisis... [as] the rich have only gotten richer," as Jayapal (D-Wash.) said, Boyle noted that "the wealth share of the richest 0.1% has nearly tripled since the late 1970s."

The growing divergence between the fortunes of the nation's ultra-rich and its working class has accelerated since March 2020, but the wealth gap has been widening for decades. According to Saez and Zucman, "the top 0.1% wealth share has increased dramatically from about 7% in the late 1970s to around 20% in recent years. Conversely, the wealth share of the bottom 90% of families has declined from about 35% in the early 1980s to about 25% today."

"As a result, the top 0.1% today owns almost as much wealth as the bottom 90% of U.S. families, which includes the vast majority of U.S. families," the economists wrote. "The rise of wealth concentration has been particularly extreme for billionaires."

Alluding to the intensification of inequality since the late 1970s, Sen. Jeff Merkley (D-Ore.), one of the bill's cosponsors, said that "when I was growing up, my dad's job as a union machinist was enough to buy a modest house, pay our family's bills, and take us on annual camping vacations. But since then, costs have gone through the roof and wages have stayed the same, making stories like my family's fewer and farther between."

That's no accident, according to Merkley, who said that "the powerful and privileged have spent decades bending Congress around their wishes to give themselves tax giveaway after giveaway, while cutting investments in the things working families need to thrive, like living wage jobs, affordable healthcare, a good education, and a home they can afford."

As Warren said, "The ultra-rich and powerful have rigged the rules in their favor so much that the top 0.1% pay a lower effective tax rate than the bottom 99%." According to Saez and Zucman, families in the bottom 99% owed 7.2% of their wealth in federal, state, and local taxes in 2019, while the total tax burden of the wealthiest 0.1% was 3.2%.

The Democratic lawmakers who introduced the Ultra-Millionaire Tax Act of 2021 wrote that "by focusing on incomes, the tax system largely misses the massive amount of wealth this tiny sliver of ultra-rich families has accumulated."

"A wealth tax," Warren noted, "is popular among voters on both sides for good reason: because they understand the system is rigged to benefit the wealthy and large corporations."

Referring to a 2020 poll (pdf) conducted in 11 key battleground states by Data for Progress, which found that 61% of voters said they would be more likely to cast a ballot for a candidate who supports a wealth tax, Warren added that she's "confident lawmakers will catch up to the overwhelming majority of Americans who are demanding more fairness, more change, and who believe it's time for a wealth tax."

Stephanie Taylor, co-founder of the Progressive Change Campaign Committee (PCCC), said that "a tax on wealth above $50 million is very popular, and is even more popular when it funds priorities like child care, healthcare, and jobs in our communities. As President Biden calls for a Build Back Better plan that invests in American infrastructure and jobs, every senator should be proud to fund these investments by signing on to Senator Warren's wealth tax legislation."

Cosponsored by several lawmakers, including Sens. Bernie Sanders (I-Vt.), Sheldon Whitehouse (D-R.I.), Kirsten Gillibrand (D-N.Y.), and Ed Markey (D-Mass.), the legislation has also been endorsed more than two dozen organizations, from unions like the AFL-CIO and UNITE HERE, to advocacy groups such as Jobs with Justice, People's Action, and Sunrise Movement.

"99.9% of Americans won't owe an extra dime in taxes under this proposal while the super-rich who have benefitted from a rigged system will finally start paying their fair share in taxes."
—Susan Harley, Public Citizen

"A wealth tax could begin to close America's yawning wealth gap and repair the damage it has caused to workers and families," Kitty Richards, a fellow at the Roosevelt Institute, said in a statement.

"Now is the time to Build Back Better, and that should include taxing wealth," added Richards, who, along with her progressive think tank colleagues, has explained why a federal wealth tax is constitutional despite claims to the contrary made by right-wing critics.

Although Warren has debunked ill-conceived concerns that wealthy Americans will renounce their U.S. citizenship to avoid paying their fair share in taxes, the bill includes a 40% exit tax to preempt such attempts.

There are additional anti-evasion measures as well, including a $100 billion investment to rebuild and strengthen the Internal Revenue Service and a 30% minimum audit rate for taxpayers subject to the wealth tax, among other tools.

"It's time to level the playing field and passage of the Ultra-Millionaire Tax Act would be a monumental step toward addressing wealth inequality," said Harley of Public Citizen. "99.9% of Americans won't owe an extra dime in taxes under this proposal while the super-rich who have benefitted from a rigged system will finally start paying their fair share in taxes."

According to Dana Bye, campaign director at Tax March, the U.S. economy is currently at a "crucial decision point between recovery and further disaster."

"To revive America's middle and working classes again, safeguard the country from future collapse, and build a new economy that truly works for everyone," Bye said, "Congress must tax the trillions of dollars in wealth hoarded by a few ultra-millionaires."