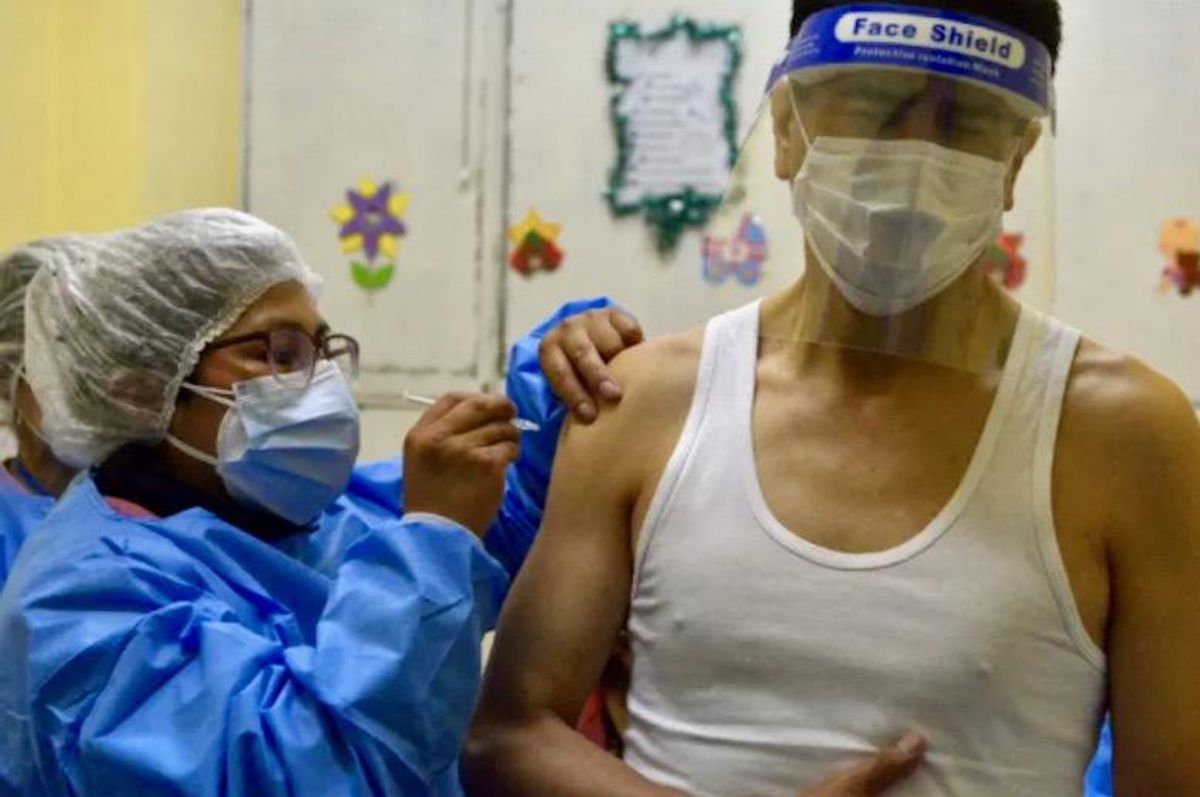 A health worker in La Paz, Bolivia receives his first dose of the Covid-19 vaccine developed by China's Sinopharm(AFP)

A US panel on Friday recommended Johnson & Johnson's one-dose Covid-19 shot for emergency approval, as some of the world's most powerful countries issued a unified call for better vaccine access for poorer nations.

The United States is the world's hardest-hit country, and its emergency use authorization -- which is now expected shortly -- of the J&J vaccine would follow those for the Pfizer and Moderna doses.

"We're going to use every conceivable way to expand manufacturing of the vaccine... and make even more rapid progress," said President Joe Biden as the country tries to finally get on top of the virus that has already claimed 510,000 US lives.

J&J stressed its vaccine was proven to work with a single shot, and could be stored long-term at standard fridge temperatures, which "offers logistical and practical advantages."

As inoculation campaigns ramp up in wealthier nations, there was unanimous support for a resolution at the UN Security Council calling for improved access to vaccines in conflict-hit and impoverished countries.

In a rare gesture, it was co-sponsored by all 15 members of the council, diplomats said, and required just a week of negotiations to draft.

"We are all facing the same threat, the same pandemic, and international cooperation and multilateral action is needed," one diplomat said.

The idea is fiercely opposed by many wealthy countries and the pharmaceutical industry.

Another diplomatic gathering on Friday looked further ahead, with G20 countries discussing post-pandemic economic recovery in a video conference.

US Treasury Secretary Janet Yellen has signalled openness to new assistance to less developed countries through the International Monetary Fund.

The bill -- which will still need to pass in the Senate -- is on track to be the second-largest US stimulus ever, after the $2 trillion package that Donald Trump signed into law last March to help the coronavirus-battered economy.

In Africa, Ivory Coast received its first jabs -- a consignment of half a million doses funded by the Covax initiative for poorer countries.

And just over half of the population of Israel has now had at least a first dose.

Russia and Austria have meanwhile agreed to talks over the delivery and joint production of Russia's Sputnik V vaccine.

But many poorer countries have struggled to secure supplies and launch inoculations, and there have been repeated warnings over the consequences.

The economic recovery will be "long and uncertain", IMF chief Kristalina Georgieva warned in an interview with Italy's La Stampa newspaper.

"The prospects for recovery are diverging dangerously across countries."

There were also reminders of the months ahead, with new virus cases increasing again globally after a month in which they had fallen by half.

The global death toll is now above 2.5 million out of a total of some 113 million cases.

In Brazil, several cities and states imposed a new round of curfews and restrictions in a bid to contain a surge of cases.

The country, whose death toll passed 250,000 Thursday, has had a piecemeal response to the crisis, with local authorities setting policies as far-right President Jair Bolsonaro dismisses restrictive measures and the use of face masks.

Many restrictions worldwide are unlikely to disappear soon, including in France, where a debate erupted over how to respond to infections in Paris.

Scepticism greeted a suggestion by Paris city hall for a three-week lockdown to help restore normality, with critics accusing mayor Anne Hidalgo of a PR stunt.

France has so far avoided a third lockdown but case numbers are starting to rise.

The danger of new variants also remained apparent as Belgian authorities said the more contagious British strain was now the dominant one in the country.

In Britain itself, an advisory group said the next phase of vaccines will be administered based on age rather than occupational risks, sparking anger from police and teachers who said they should be prioritised.

Britain has vaccinated 19 million people, 35 percent of all adults, with at least one dose and says it plans to reach the whole population by the end of July.

But Estonia was forced to ban church services and to close theatres and museums, while the Czech government said it would stop people from leaving their local districts and shut all schools and shops selling non-essential goods.