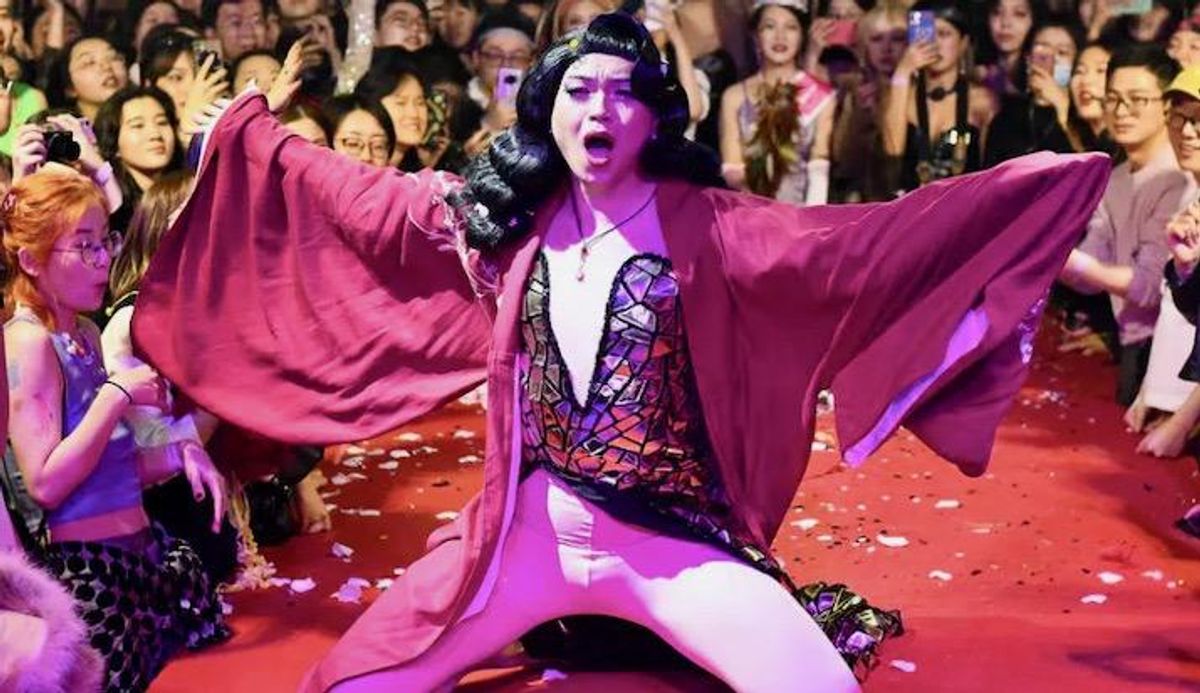 Leather, glitter, stilettos and a strut -- voguing, the underground dance phenomenon, has seized Beijing and given China's LGBT community a "playground" to celebrate their identities.

Sashaying down the runway clad in fake-fur, mile-high wigs and dramatic makeup, performers flaunted poses for an ecstatic audience, powered by a pounding house music soundtrack.

Hundreds of young LGBT Chinese, many traveling from far and wide to attend, packed into the cramped venue for Saturday's event -- the first large-scale voguing ball held in Beijing.

With categories including "Butch Queen Realness", "Drag Queen Lip Sync" and "Voguing Open To All", performers battled it out to win the judges' approval -- scoring straight 10s -- or were eliminated in cut-throat style.

Homosexuality was only declassified as a mental illness in China in 2001. Most LGBT people continue to lead low-key existences due to a fear of crackdowns on activism and largely conservative social norms.

Attendees at a voguing ball feel "a very strong sense of vitality," Bazi said, "because a lot of sexual and gender minorities express themselves with a spirit of resistance."

The highly stylised dance form developed in the 1980s, but traces its roots to early-20th century New York where an underground ballroom culture blended elements of beauty pageants, modeling and dance contests.

Balls became a safe haven for the LGBT Black and Latino community in particular to socialize and express themselves freely.

Performers grouped into "houses" with a fierce sense of solidarity, which often became a replacement for the birth families that had ostracized them.

Madonna's 1990 hit "Vogue" spotlighted the culture, and voguing is now hugely popular in the West, helped by American TV shows like "RuPaul's Drag Race" and "Pose".

It travelled to China relatively recently, after making inroads in Japan, Korea, Taiwan and Hong Kong.

It is "a subculture within a subculture," Bazi says, but one that's now on the verge of going mainstream in China, after emerging out of Shanghai.

"Voguing has really blossomed here in the past two years," said 23-year-old performer Huahua, who identifies as queer non-binary.

"Right now the scene is very young, but it's also very enthusiastic and passionate. It's like cuttings being planted everywhere that are now taking root."

Huahua, who competed in long braids and a black cape studded with feathers, started voguing in 2016 and immediately fell in love with its elegant movements, which draw inspiration from Old Hollywood films, haute couture fashion spreads and even ancient Egyptian hieroglyphs.

"You can express your sexuality, your sensuality," they said, bending down to pose on the floor, making intricate hand movements.

"You're serving looks on stage like: I'm beautiful and fierce."

For Huahua, voguing offers an escape from the Beijing rat race and made them feel "truly liberated and happy for the first time", after an unhappy childhood where they felt marginalized by their gender identity and sexuality.

"It's already become a part of my life. Every day when I go to the toilet or drink water, I don't walk normally but in a voguing catwalk style," they told AFP at their home.

But as the voguing scene matures and inevitably becomes more commercialized, some fear it may lose touch with its radical roots.

"Voguing has a very tragic history; it's a dance form created out of the sufferings of an entire generation who've experienced racism, bigotry, depression," said Huahua, adding that many forefathers of the scene passed away of AIDS.

In China, it is surprisingly popular with straight women, who like LGBT people are "extremely oppressed by the patriarchy", according to Bazi.

"Once you learn voguing, you cannot avoid coming into contact with its culture," said Huahua.

"If you want more people to know about it, then they also have to learn the history behind it."