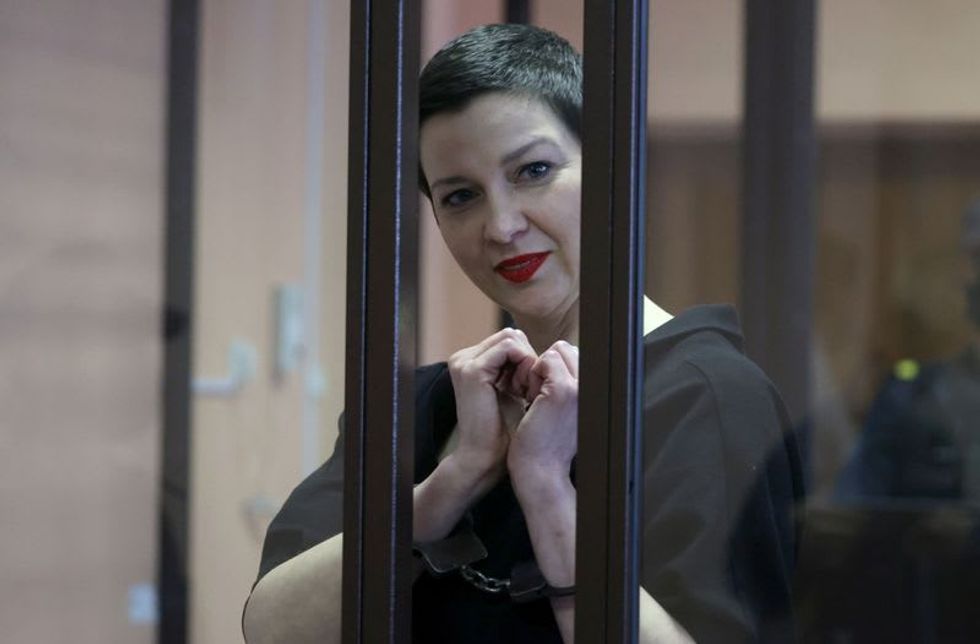 KYIV (Reuters) - Maria Kolesnikova, one of the leaders of mass street protests against Belarusian President Alexander Lukashenko last year, was sentenced to 11 years in prison on Monday, the state-run Belta news agency and the Belarusian opposition reported.

Kolesnikova, 39, was detained after ripping up her passport to prevent Belarusian security forces from deporting her in a standoff at the Ukrainian border in September.

The musician-turned-politician became one of the faces of the mass opposition movement during the August 2020 presidential election, which the protesters say was rigged to extend Lukashenko's grip on power.

Lukashenko, who has denied electoral fraud, has been in office in the former Soviet republic since 1994 and has faced fresh Western sanctions since launching a violent crackdown on his opponents.

Kolesnikova and another senior opposition figure, Maxim Znak, were charged with extremism and trying to seize power illegally. Both denied wrongdoing and Kolesnikova called the charges absurd.

Znak was sentenced to 10 years in prison.

Footage from the Sputnik Belarus channel showed the two in a glass cage ahead of the verdict. Kolesnikova raised her handcuffed hands to make her trademark heart sign and smiled for the cameras.

"Maria & Maksim are the heroes for Belarusians. The regime wants us to see them crushed & exhausted. But look - they are smiling & dancing," said exiled opposition figure Sviatlana Tsikhanouskaya on Twitter. "They know - we will release them much earlier than these 11 years. Their terms shouldn't frighten us – Maksim and Maria wouldn't want this."

The trial, which began last month, was closed to the public on national security grounds. The circumstances of the case, the investigators and the witnesses were not disclosed. Dozens of people came to the court building on Monday, according to several videos circulating on social media.

Kolesnikova was among tens of thousands of people detained after the protests began.

She was one of three women, all political novices, who joined forces to front last year's election campaign against Lukashenko after higher-profile male candidates were barred from standing.

Viktor Babariko, one of the men who tried to stand against Lukashenko, was jailed for 14 years in July.

(Writing by Matthias Williams in Kyiv; Editing by Kevin Liffey and Hugh Lawson)