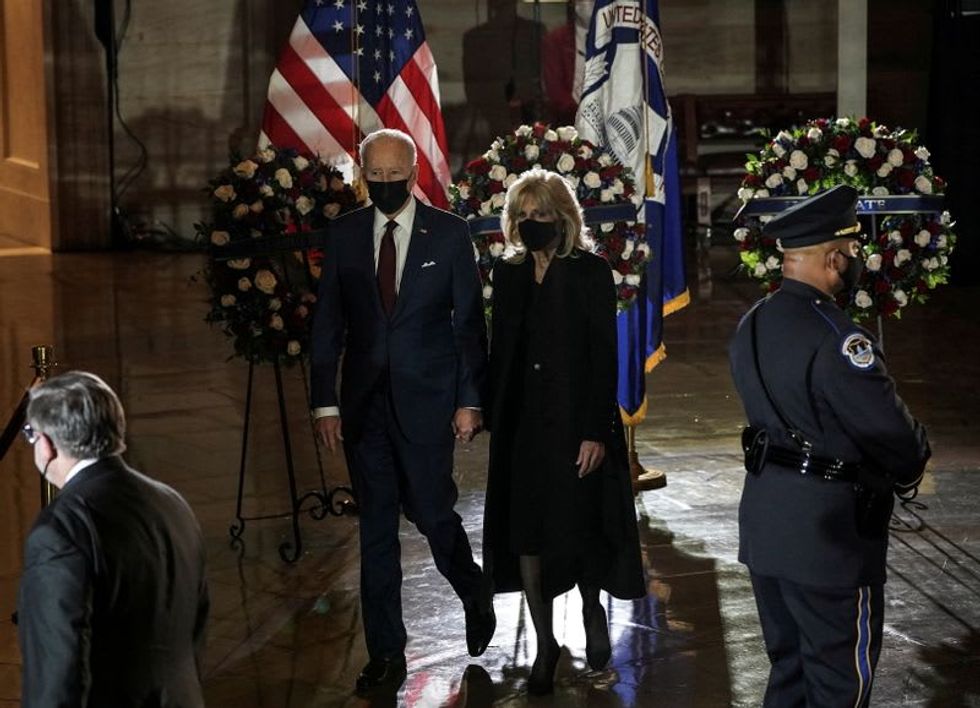 By Nandita Bose and Trevor Hunnicutt

WASHINGTON (Reuters) -President Joe Biden spoke to hundreds of uniformed officers at a memorial service on Saturday to honor law enforcement officers who lost their lives in the line of duty.

The event, which took place in front of the Capitol with guests including FBI Director Christopher Wray, Homeland Security Secretary Alejandro Mayorkas and first lady Jill Biden, honored 491 law enforcement officers who lost their lives at work in 2019 and 2020.

"Being a cop today is one hell of a lot harder than it's ever been," Biden said in the 22-minute remarks.

"And to the families of the fallen: you've suffered an enormous loss. But understand, your loss is also America's loss ... and your pain is America's pain," he said in his comments, which also connected his grief over the loss of two of his children to that of the families at the service.

Biden credited law enforcement agencies with upholding the U.S. political system during the Jan. 6 riot at the Capitol, called for more resources to be allocated to law enforcement officers, who he said were currently being asked to do too much, and expressed sorrow for the shooting earlier on Saturday of three deputies in Houston, Texas.

The White House has also issued a proclamation ordering flags to be flown at half-staff at public buildings on Saturday.

The National Peace Officers' Memorial Service began in 1982 as a small gathering in Washington's Senate Park of approximately 120 survivors and supporters of law enforcement. It has since turned into a series of events, attracting thousands of survivors and officers to the nation's capital each year.

Biden has been a loyal ally to law enforcement, dating back to his days in the Senate when he crafted the 1994 crime bill with their help. Earlier this year, the president visited the Capitol to pay his respects to Brian Sicknick, a police officer who died of multiple strokes after being sprayed with a chemical during the Jan. 6 riot.

However, the president's efforts to pass a police reform bill to tighten practices following the 2020 murder of George Floyd in Minneapolis failed in September https://www.reuters.com/world/us/republicans-are-refusing-back-police-reforms-trump-supported-white-house-2021-09-22. That marked a setback for the Democratic president, who campaigned on the need for policing reforms.

Biden's agenda on gun reform has also largely stalled, with insufficient support in the Congressional chambers his Democratic party controls by only narrow margins. Biden's initial pick to run the Bureau of Alcohol, Tobacco and Firearms withered under opposition; he has yet to name another candidate.

More recently, Biden has expressed hope that he can still sign a comprehensive police reform bill into law, and indicated in statements at the time that Democrats might have to do that on their own.

Biden has also said he will look into further executive actions https://www.reuters.com/world/us/biden-wants-keep-working-police-reform-bill-willing-take-executive-action-2021-09-22 he can take to help hold police officers accountable for breaking the law.

The National Fraternal Order of Police, a major officers' union which sponsored the event, endorsed Biden's Republican opponent Donald Trump in the 2020 election.

(Reporting by Nandita Bose and Trevor Hunnicutt in Washington; Editing by Leslie Adler and Daniel Wallis)