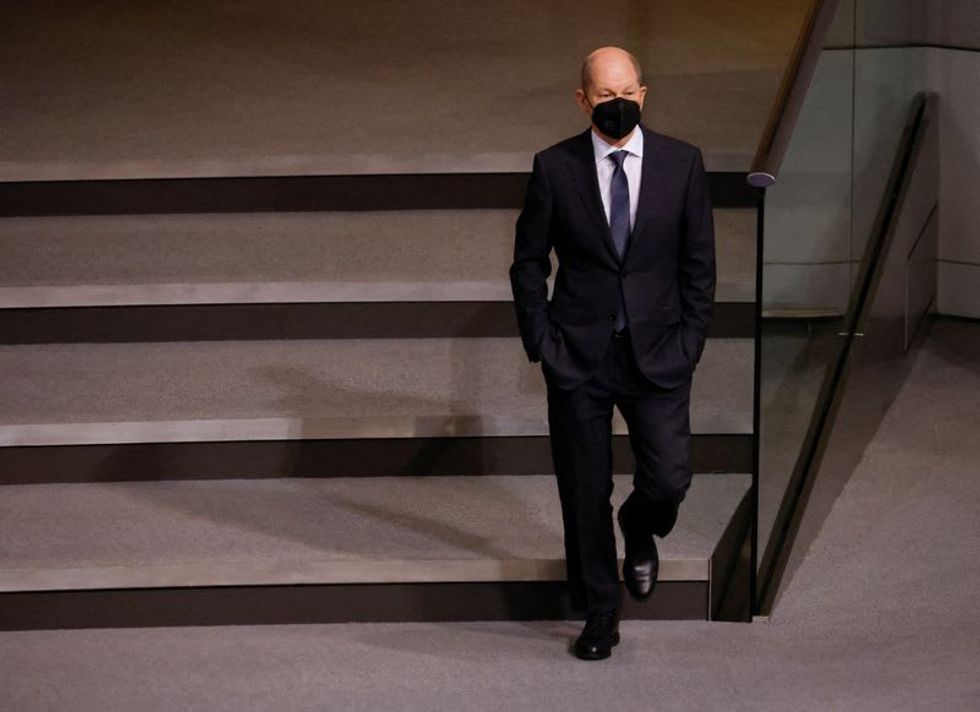 WASHINGTON (Reuters) -The United States and Germany on Monday sought to present a united front against potential Russian military aggression in Ukraine, with President Joe Biden declaring the two in "lockstep" despite questions over Berlin's commitment to scuttle an important energy pipeline.

Biden met with German Chancellor Olaf Scholz in the Oval Office as Western countries brace https://www.reuters.com/world/russia-plays-down-hope-breakthrough-ahead-macron-putin-talks-2022-02-07 for an invasion of Ukraine as some 100,000 Russian troops have amassed near its border.

Russia denies it is planning an invasion. U.S. officials say an attack could occur within days or weeks.

Scholz, under fire at home and abroad for what has been seen as insufficient leadership in the crisis, told reporters in Washington that Russia would pay a very high price if it invaded Ukraine, as his defense minister announced plans to send up to 350 more troops to Lithuania.

"Germany is one of America's closest allies," Biden said as Scholz sat next to him in the Oval Office, a crackling fire burning in the fireplace behind them. "We’re working in lockstep to further deter Russian aggression in Europe and to address the challenges posed by China and to promote stability ... in the Western Balkans."

Scholz, in comments to reporters before his meeting with Biden, said the West will act swiftly, decisively and in unity if Russia invades Ukraine. "There will be a very high price to pay if Ukraine is attacked militarily," he said.

The German leader, whose popularity has plunged 17 percentage points in recent weeks as tensions ratcheted up with Moscow, is due to visit both Ukraine and Russia next week, after meetings this week with Biden, European Union officials and the heads of Baltic states.

Germany, which uses Russian gas to cover half its needs, has delayed approval of the Nord Stream 2 pipeline until at least the second half of 2022, but has refused to cancel the nearly completed project.

Germany's failure to be more forthright about its plans for the pipeline has fed longstanding concerns among U.S. lawmakers and officials. Washington has made clear that it expects Germany to halt the commercial project if Russia invades, but U.S. officials have not provided details on how that would be accomplished.

White House spokesperson Jen Psaki said the United States would work with Germany "to ensure that Nord Stream 2 does not move forward should Russia invade."

German officials have been reluctant to state that commitment publicly, but say all options are on the table.

Scholz said Germany was working closely with the United States and its allies to finalize their sanctions plans, but said efforts to resolve the dispute diplomatically - including through so-called Normandy format talks with France, Ukraine and Russia - were also starting to resonate.

"It's about preventing a war in Europe," Scholz told ARD before his departure to Washington.

The Biden-Scholz relationship could be pivotal at a time when French President Emmanuel Macron has yet to declare if he will run in an election in three months, and while British Prime Minister Boris Johnson is engulfed in a domestic crisis.

U.S. officials played down differences with Germany and said Washington had been coordinating closely with Berlin and the EU on a "swift and severe package of sanctions" to be imposed on Russia in the event of an invasion.

They said, as Scholz has too, that Germany was the second largest donor of non-military assistance to Kyiv after the United States, and that Germany's support in getting U.S. forces to Romania, which shares a border with Ukraine, was critical.

Details of the sanctions package are still being finalized, but banning Russia from the SWIFT financial transaction system remains an option, a second senior U.S. official said.

Steven Sokol, president of the American Council on Germany, said Scholz needed to clarify Germany's position on Nord Stream 2 and show more "creativity" in providing assistance to Ukraine, short of sending in weapons.

"Germany has to understand that if it wants to be more of a player on the world stage and carry more responsibility, then with that comes taking more action," Sokol said. "In order to be a leader, Germany has to do more."