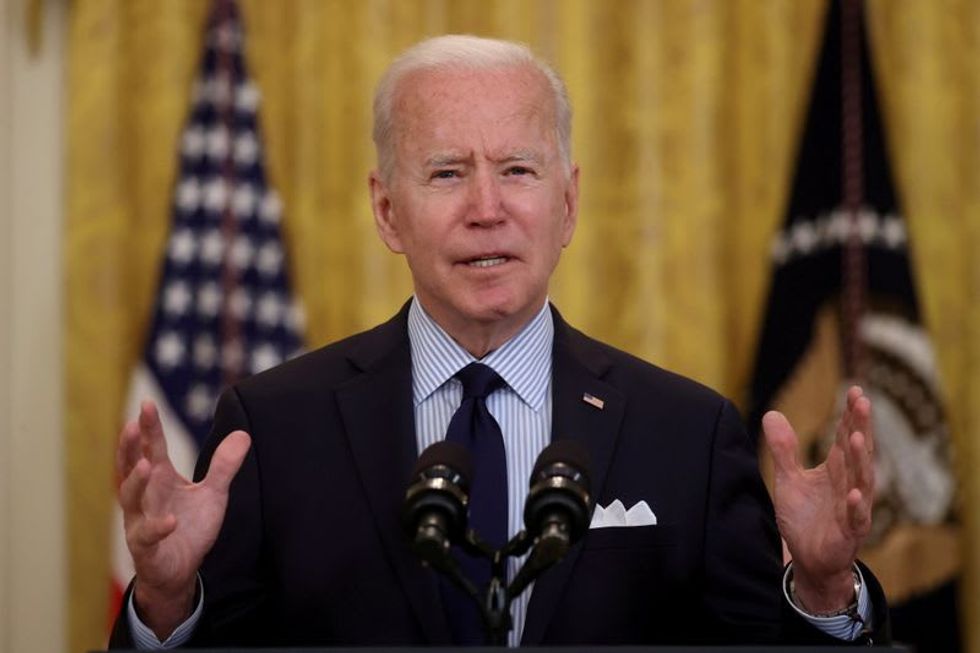 By Steve Holland and Michelle Nichols

WASHINGTON/NEW YORK (Reuters) - President Joe Biden said on Thursday he is pressing for a halt to violence between Israelis and Palestinians, but U.S. officials say they are resigned to the conflict continuing for some days to come.

Since taking office in January, Biden's foreign policy moves have largely been centered on China, Russia and Iran. The sharp escalation in violence between Israel and the Palestinian territories and a mounting death toll have forced the Democrat to launch a diplomatic effort aimed at restoring calm in a volatile region.

As a consequence, the Biden administration has reached out to a number of regional Arab states to get them to exert influence on Hamas - labeled a terrorist organization by Washington - to stop the violence.

The U.S. strategy has been a basic one: Get the violence to stop, and restore what officials called a sustainable calm, but even that has been elusive.

Biden told reporters on Thursday that "there has not been a significant overreaction" by the Israelis to the attacks.

"The question is how they get to a point where there is a significant reduction in the attacks, particularly the rocket attacks that are indiscriminately fired into population centers," he said. "It's a work in progress right now."

U.S. officials are realistic that the violence is likely to persist if not intensify over the next couple of days, a U.S. official said.

Amid calls for the United States to do more and for Biden to step in more directly, it is unclear how the president could prevail on both sides in the protracted conflict he has tracked for decades as a U.S. senator and then vice president.

Biden shifted U.S. policy sharply in taking over from Republican Donald Trump, waiting weeks to talk to Israeli Prime Minister Benjamin Netanyahu for the first time and re-emphasizing the need for a two-state solution to the Israeli-Palestinian conflict.

PUTTING ON BRAKES AT U.N.

Trump had been a strong backer of Netanyahu and his White House negotiated normalization deals between Israel and the United Arab Emirates, Bahrain, Sudan and Morocco.

Democrats faulted Trump for ignoring the Palestinians, and Biden's statements about the violence have pointedly noted that Palestinians deserve freedom, peace and prosperity as much as the Israelis.

The United States has been isolated at the United Nations since it put the brakes on any public Security Council involvement to try to end the violence between Israel and Palestinian militants, leading some diplomats to question Washington's strategy.

Washington does not appear to have a "clear strategy" on how to broker a truce and "that is the real problem," said a senior Arab diplomat, speaking on condition of anonymity.

Truce efforts by Egypt, Qatar and the United Nations have so far offered no sign of progress and the United States is sending an envoy to the region.

The region is now experiencing the worst violence in years - Israel has unleashed an offensive against militants in Gaza after Hamas fired rockets at Jerusalem and Tel Aviv over the clashes at al-Aqsa mosque during the Muslim fasting month of Ramadan.

"Yes, it's a crisis, but it doesn't seem to me like everyone's running around like chickens with their heads cut off," said Jon Alterman, a former State Department official who is now director of the Middle East Program at the Center for Strategic and International Studies in Washington.