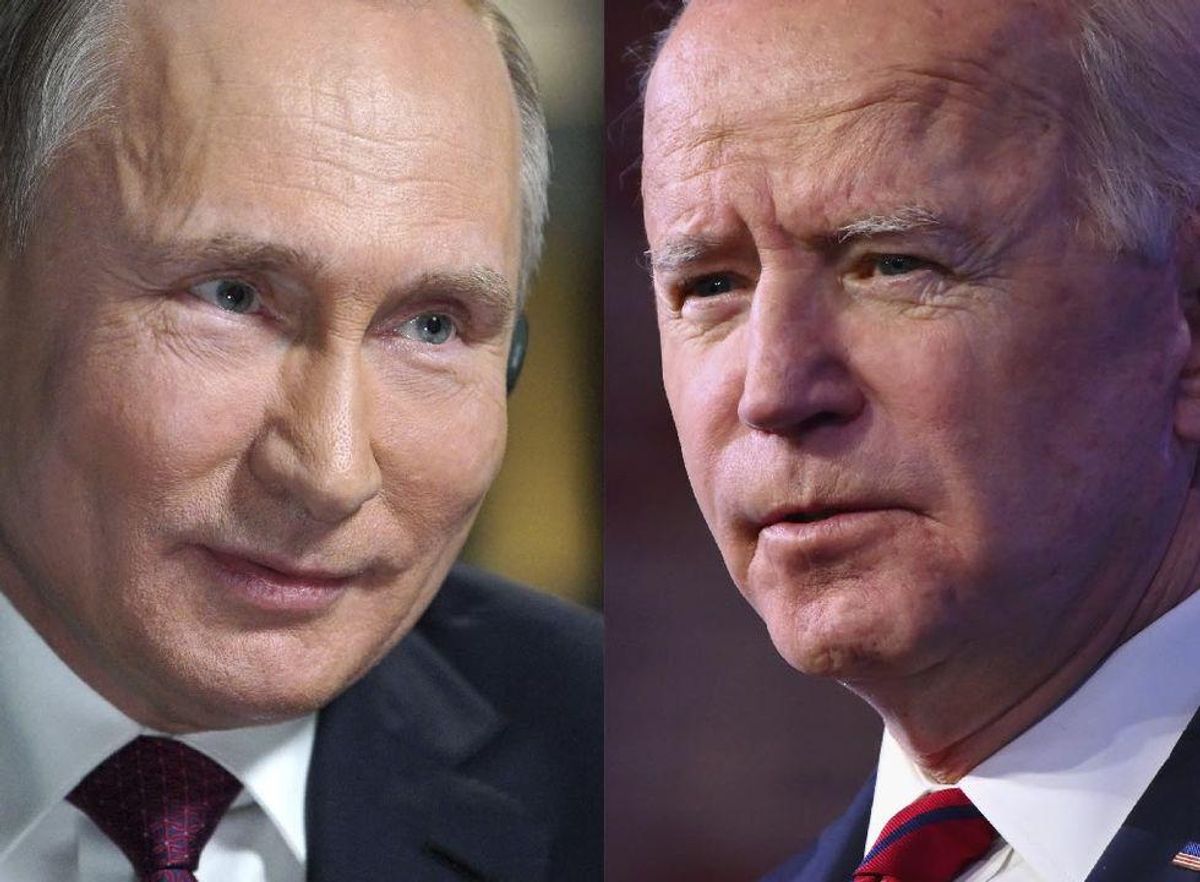 Russian President Vladimir Putin and US President Joe Biden are set to hold their first summit in Geneva on June 16, 2021

US President Joe Biden said Monday he would lay down "red lines" to his Russian counterpart Vladimir Putin at their upcoming meeting, after rallying NATO allies to face up to challenges from Moscow and Beijing.

Speaking after his first NATO summit since being elected, Biden insisted: "I'm not looking for conflict with Russia, but that we will respond if Russia continues its harmful activities."

Biden also called Putin "tough" and "a worthy adversary" ahead of their hotly anticipated meeting in Geneva on Wednesday.

The warning to the Kremlin leader came as Biden pressed to renew Washington's transatlantic ties with allies after years of tensions under his predecessor Donald Trump.

At Biden's urging, NATO leaders agreed to work together against the "systemic challenges" posed by China's aggressive policies as the alliance fleshed out its nascent approach to Beijing.

China's increasingly assertive actions in building a nuclear arsenal as well as space and cyber warfare capabilities threatens the international order, they said in a statement.

But, in a nod to Washington's growing concern, he warned: "China's growing influence and international policies present challenges to Alliance security."

In the summit communique, the leaders told Russia that there would be no quick return to "business as usual".

Russia's military build-up and provocative behavior on NATO's eastern frontier "increasingly threaten the security of the Euro-Atlantic area and contribute to instability along NATO borders and beyond".

On China, Biden is picking up from where Trump left off by getting NATO to start paying attention to Beijing.

But European allies have been wary that an increase of focus on China could distract NATO from its major priority -- Russia.

German Chancellor Angela Merkel insisted that alliance members should not "overestimate" the dangers posed from Beijing.

"We have to find the right balance," she said. "China is a rival on many issues, but at the same time it is also a partner on many issues."

French President Emmanuel Macron insisted that NATO should not spread itself too thin and "skew" the relationship with China.

"NATO is a military organization, the subject of our relationship with China is not only military," he said, stressing NATO's north Atlantic focus.

Looming large in the background for the summit was also the scramble to complete NATO's hasty withdrawal from Afghanistan after Biden surprised partners by ordering US troops home by September 11.

Biden discussed with Turkish President Recep Tayyip Erdogan an offer from Ankara to keep troops in the country to secure Kabul airport -- provided the US gave support.

Erdogan announced no firm deal on the issue -- or any progress on the thorny dispute over Turkey's purchase of Russia's S-400 missile system.

But Erdogan insisted that he had held "fruitful and sincere" talks with his US counterpart.

The final NATO summit statement did not mention Turkey's role at the airport, but did stress that the alliance would continue to pay to keep the facility open.

Much of the summit Monday was dedicated to trying to forge a way forward by greenlighting a 2030 reform plan to revitalize an alliance that Macron warned in 2019 was undergoing "brain death".

Allies endorsed a new cyber defense policy to tackle rising threats and agreed for the first time that an attack in space could trigger the Article 5 collective defence clause.

They also committed to increasing the alliance's budget and spending more on "common funding" -- but details remained sparse after opposition to increased spending led by France.