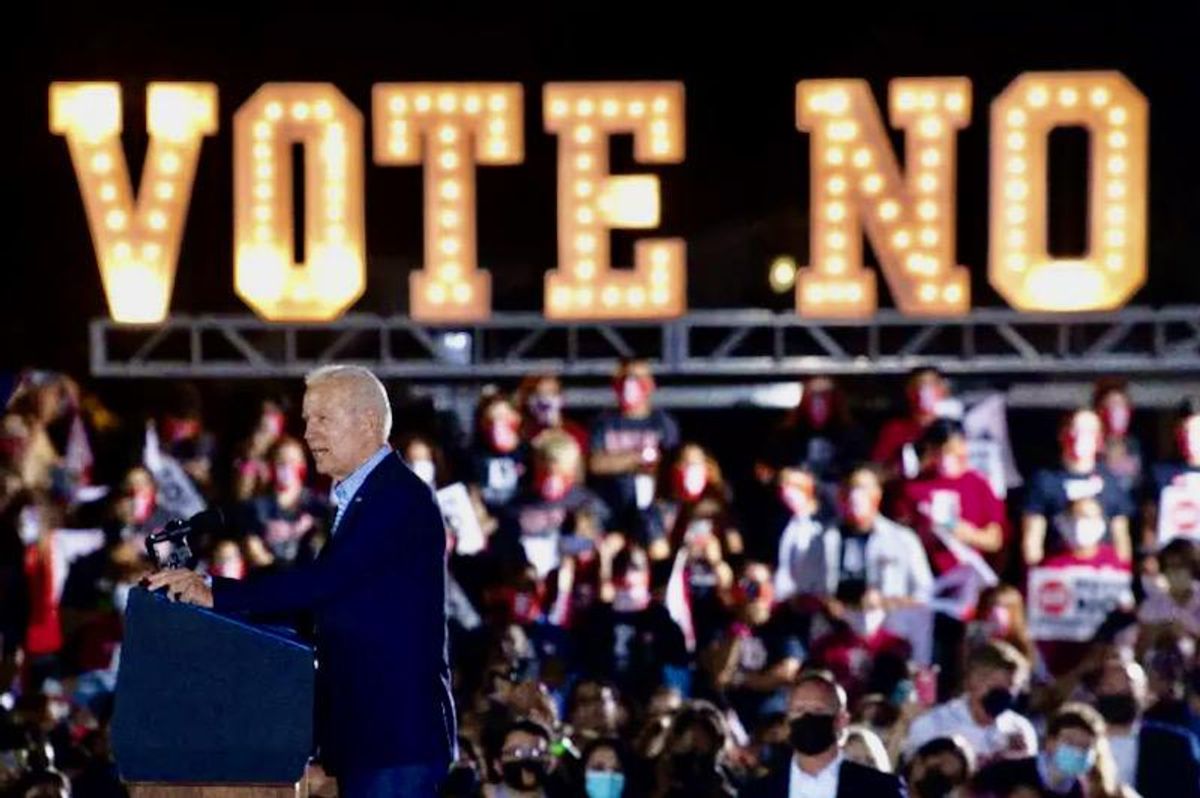 President Joe Biden hit the hustings in California on Monday, warning voters they risk a Donald Trump-style governor if they vote to recall the state's leader.

The world's fifth biggest economy is coming to the end of a $280 million ballot on kicking the Democratic Party incumbent out of office, in an initiative sparked by Republicans angry over mask mandates and Covid lockdowns.

"You either keep Gavin Newsom as your governor or you get Donald Trump," Biden told an audience in Long Beach.

"The choice should be absolutely clear. You have a governor who has the courage to lead.

"Voting no will be protecting California from Trump," Biden said.

The Black ex-lawyer is polling atop a field of 46 challengers, which also includes a cannabis consultant, a former San Diego mayor, and a self-proclaimed "Billboard Queen".

Voters have until Tuesday evening to return a ballot on which they are being asked firstly if they should fire Newsom, and secondly who should replace him.

Newsom needs a simple majority to keep his job, and render the ballot's second part irrelevant.

But should a plurality vote to dump him, then whoever polls the highest -- no matter how small their majority -- becomes governor for the term's remaining 16 months.

The recall is only the second in California's history; the first brought actor Arnold Schwarzenegger to office in 2003.

Republicans -- who have not had control of the famously liberal state since Arnie left office -- were angered by Newsom's lockdown rules they say unnecessarily kept children out of school and suffocated small businesses as the coronavirus killed thousands in the state.

The petition to remove him gathered steam after he was snapped having dinner at a swanky restaurant, seemingly in breach of his own rules.

That fuelled a perception he was an out-of-touch hypocrite.

After a shaky start, he now seems to have turned things around, with a campaign energized by the emergence of Elder as the leading opponent, giving him a specific Trumpian target.

Biden's stop in Los Angeles came at the end of a day when he swung through the western United States on a tour aimed at highlighting the dangers of climate change.

The region is enduring a punishing drought that has left swathes tinder-dry, and vulnerable to wildfire.

Millions of acres (thousands of square kilometers) have already burned, with many months left to run in the fire season.

Biden, who met firefighters in Idaho before flying over burned-out parts of northern California, is pushing multi-trillion-dollar legislation designed to fix crumbling infrastructure, and better prepare the country for the ravages of man-made climate change.

"Each dollar we invest in resilience saves up to $6 down the road when the next fire doesn't spread as widely. Those investments save lives," he said.

The president is focusing on what is becoming a familiar message on the urgency of an issue that has sparked huge fires and floods -- both of which have devastated different areas of the country in recent months.

A hurricane was bearing down on Texas late Monday, just weeks after another storm tore through the country, leaving dozens dead.

"The reality is, we have a global warming problem," Biden told firefighters in Idaho, echoing the scientific consensus that human activity is affecting the climate.

Biden recently said the world faces a "code red" on climate change and called for parties to put aside their political differences to address the issue.

"We have to think big," Biden told an audience near California's state capital, Sacramento.

"Thinking small is a prescription for disaster... We're going to fight this climate change."