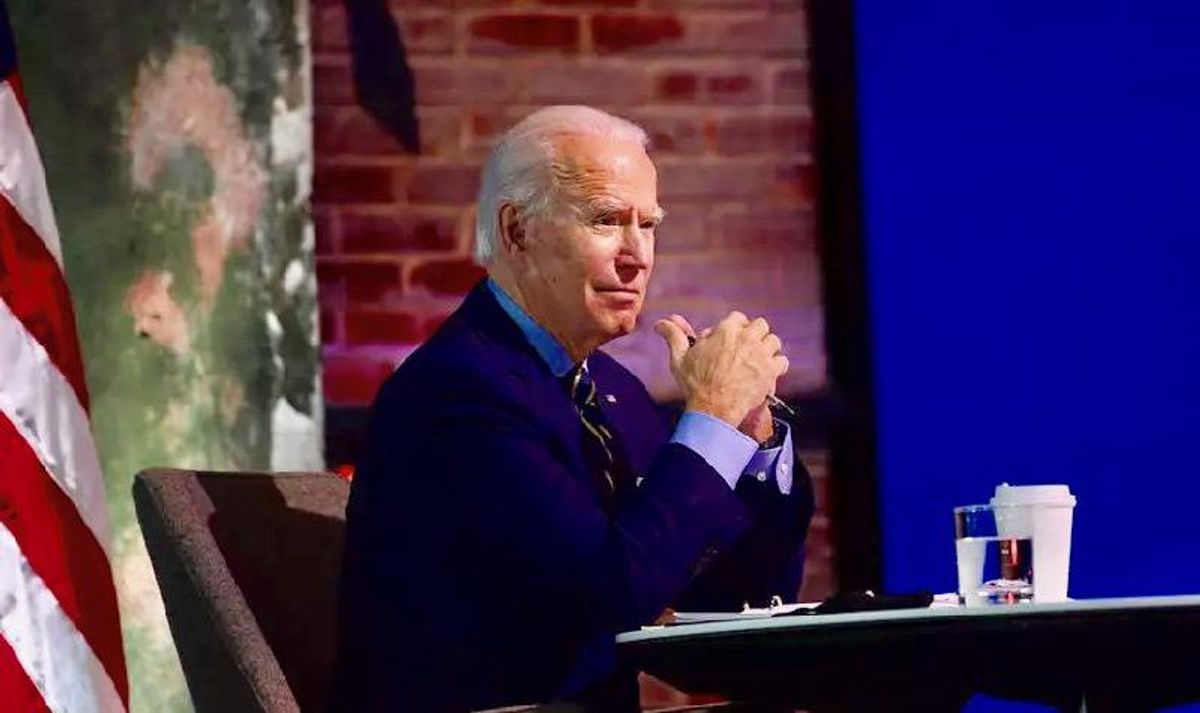 President-elect Joe Biden is briefed by expert members of his national security and foreign policy agency review teams at the Queen Theater on December 28, 2020 in Wilmington, Delaware. AFP - Mark Makela

President-elect Joe Biden believes that rescuing the faltering economy and crushing the coronavirus are the most important challenges he faces right out of the gate when taking office on Jan. 20. To address these problems, he proposed a bold and aggressive $1.9 trillion legislative package on Thursday to tackle them head-on.

"The US government can borrow money for less than the rate of inflation, which means we owe it to ourselves to borrow, borrow, borrow," said writer Matt Yglesias in praise of the plan. "I'm excited to see a new administration thinking big."

A key question, of course, is whether the plan can pass Congress. It will likely have support in the House, where Democrats are in control, but Biden will be working with the thinnest possible majority in the Senate. And under current rules, a bill typically needs 60 votes to pass the Senate — which would require 10 Republicans to sign on. Biden hopes to convince members of the opposition to join him, but if he can't, his team also has plans to use a procedure known as budget reconciliation to pass the bill with just 51 votes.

Here are seven key features of the plan as it is currently conceived:

One of the most popular elements of the first two rounds of COVID rescue funds was direct government payments to individuals and families. After the first round, which sent $1,200 to individuals under a set income threshold, Congress authorized another set of $600 payments starting in December — even though Democrats and President Donald Trump were demanding $2,000. The $2,000 figure became a rallying point in the Georgia runoffs which Democrats won, so Biden plans to follow through on the promise of delivering this amount. But be careful, though — since the $600 has already gone out to many people, the amount individuals will likely receive if the Biden bill passes as proposed will be an additional $1,400, rounding out the combined payments to a total of $2,000.

Some have already begun criticizing the plan for this plank. But it's important to remember it has many other moving parts.

2. Help for unemployed people, hunger, and people at risk of eviction

The plan also increases the federal boost to weekly unemployment payments from $300 to $400 and extends the applicable period to September. Under current law, the payments would run out in March. There's another $25 billion of support for renters and an extension of the eviction moratorium from the end of January to the end of September. People who get support for buying food through programs such as SNAP will also see increased funds.

3. Ramp up a national vaccination program

If the plan passes, there will be $400 billion to fight the coronavirus. These funds will help enact a $20 billion national vaccination plan, which is the best hope the country has of putting the virus behind it quickly. Under Trump, vaccination rates have been slow as states have largely been left on their own to get shots in arms.

There's also $50 billion allocated for expanding COVID testing, which will continue to be crucial until the population approaches herd immunity through vaccination. Biden hopes to be able to have schools open in the spring, which will require widespread and frequent testing.

State and local governments have been hit especially hard by the coronavirus downturn since they depend on tax revenues, which have fallen, to keep their budgets balanced. Senate Majority Leader Mitch McConnell and the Republicans have resisted calls to provide support for localities, denouncing it as a "blue state bailout" — even though states need help regardless of their politics. Under the Biden plan, $350 billion would be earmarked for these governments,

In addition to the direct payments of an additional $1,400, the plan gives extra support to families by expanding select tax credits, as CNBC explained:

The president-elect wants to increase the child tax credit to $3,000 for qualifying children aged 17 and under. Kids under age 6 would be eligible for a $3,600 credit.
Biden is calling to put these expansions into effect for the year on an emergency basis.
In comparison, families can currently claim up to $2,000 per child under age 17.
To further benefit low-income families, Biden also wants to make the child tax credit fully refundable. That means taxpayers get a refund check, even if the credit exceeds their tax liability.

It seems unlikely that it will make it into the final version of the plan, but Biden's vision would include a hard-fought progressive goal: raising the minimum wage to $15 an hour.