Black pastors rally at US trial of slain jogger 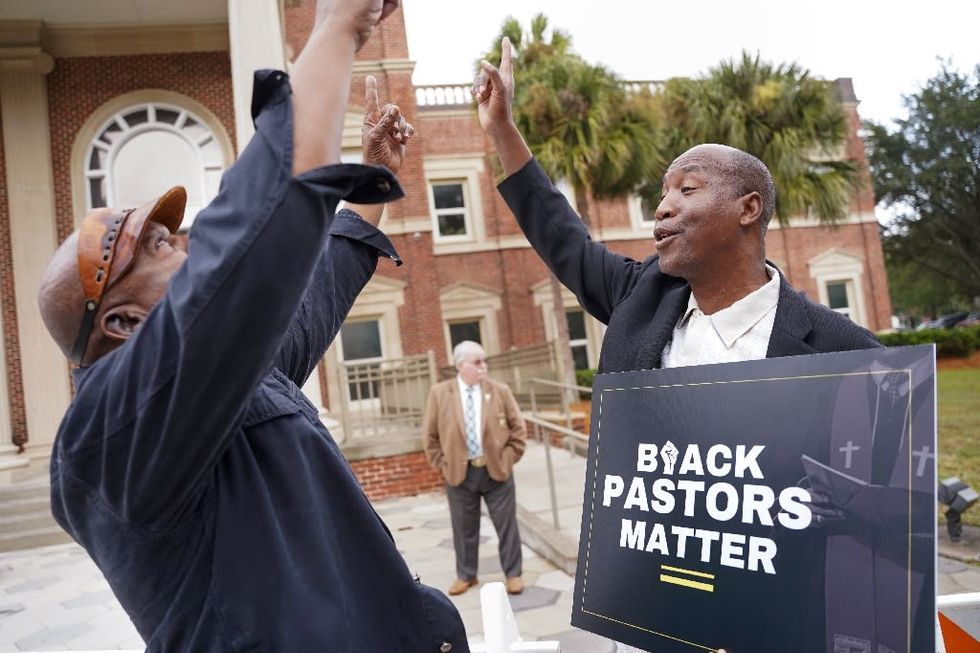 Washington (AFP) - Dozens of Black clergy rallied Thursday outside the courthouse where three white men are on trial for killing an African-American jogger, after a defendant's lawyer asked the judge to bar "Black pastors" from the gallery.

The gathering, organized by the Reverend Al Sharpton's civil rights group National Action Network, came after the man who fired the fatal shots took the witness stand in his own defense.

Gregory McMichael, a 65-year-old retired police officer, his son Travis, 35, and their neighbor William "Roddie" Bryan, 52, are facing murder and other charges for the February 2020 shooting of 25-year-old Ahmaud Arbery.

The McMichaels, who were armed with a shotgun and a handgun, and Bryan chased Arbery in their pickup trucks through their Georgia neighborhood of Satilla Shores and he was shot by the younger McMichael after a struggle.

Closing arguments in the high-profile case are scheduled for Monday.

Bryan's lawyer Kevin Gough has complained to the judge about the presence of Sharpton and another prominent civil rights leader, the Reverend Jesse Jackson, in the public gallery.

"We don't want any more Black pastors coming in here," Gough said, claiming their presence was influencing the jury.

Jackson has attended the trial on several days, sitting in the public gallery next to Arbery's mother.

Judge Timothy Walmsley has repeatedly dismissed the defense motions, saying anyone is welcome to attend the trial so long as they are not disruptive.

Answering Sharpton's appeal, dozens of Black clergymen held a rally outside the courthouse on Thursday.

"While I may not be a preacher, there's a ministry that exists," King said. "And part of that ministry is whenever you see injustice, you must stand up.

"We're going to keep coming back until justice is done for this family."

Sharpton addressed the defense lawyer's assertion that the courtroom presence of the Black pastors could intimidate the jury.

"I've been going to trials for 40 years when police were involved and they packed the courtroom with uniformed police and nobody ever says that's intimidation or influence," he said.

'Went the other direction'

The rally came a day after the defense put Travis McMichael on the witness stand.

Under cross-examination, McMichael said he thought Arbery was a burglar who had been active in the neighborhood and who he had seen several days earlier.

He said Arbery did not display a weapon or threaten him in any way but was "acting weird."

"He was acting funny," McMichael said, "So I was on alert."

The defendants have invoked a since-repealed state law that allows ordinary citizens to make arrests but McMichael acknowledged during questioning from prosecutor Linda Dunikoski that he did not tell Arbery at any point that he was seeking to arrest him.

McMichael, who was in his truck with his father, said that he repeatedly tried to talk to the running Arbery through the car window, but he refused to answer and "stopped, turned and went the other direction."

The fatal encounter took place in front of the pickup truck after McMichael got out of the driver's side with his shotgun and Arbery, who had been chased for more than five minutes, ran around the passenger side.

"He turned and we were on each other," McMichael said.

Dunikoski asked McMichael why he claimed on the witness stand that Arbery grabbed his shotgun while telling police after the shooting that he could not remember clearly whether this happened or not.

"I just killed a man. I had blood on me still," he said of his state of mind during the police interview. "It was the most traumatic event of my life."

A graphic video of the shooting of Arbery went viral on social media and added fuel to last year's protests against racial injustice sparked by the murder of George Floyd.

There is only a single Black juror on the 12-member jury hearing the case although about 25 percent of the 85,000 residents of Glynn County, where the trial is taking place, are Black.