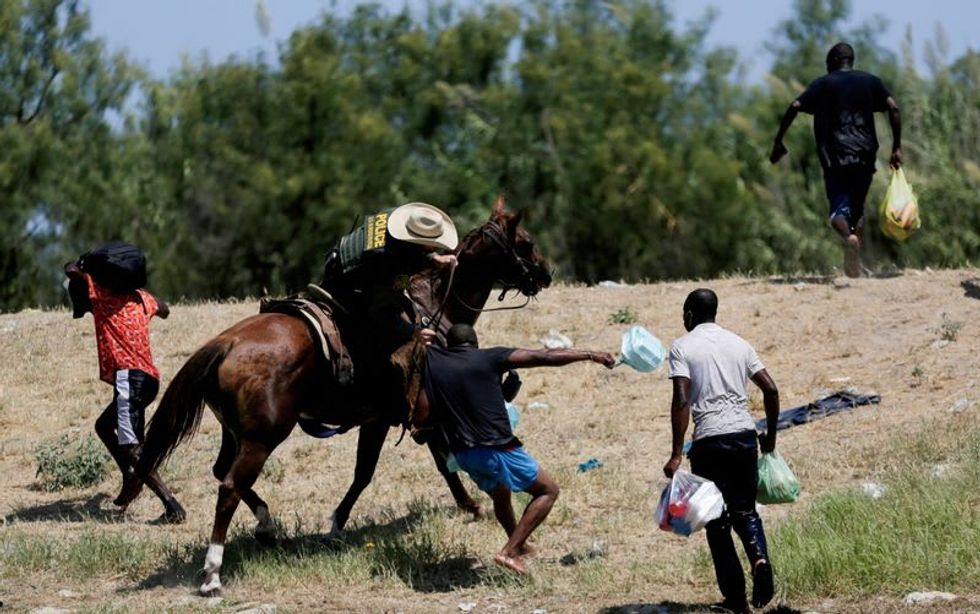 Four employees from U.S Customs and Border Protection (CBP) have been referred for disciplinary review over their treatment of Haitian migrants who they sought to push back across the Rio Grande using horses last September, officials said on Friday as the agency released a more than 500-page report on the widely filmed and photographed incident.

CBP Commissioner Chris Magnus in a press conference stressed the disciplinary process related to the Sept. 19 incident was ongoing, and he did not identify the employees.

Reuters witnesses at the time saw mounted officers wearing cowboy hats blocking the paths of migrants, and one officer unfurling horse reins resembling a lariat, which he swung near a man's face as he carried a bag of food across the Rio Grande river to a makeshift encampment in the United States. The images triggered a strong nationwide backlash and calls for an investigation.

Magnus added the report said no migrants were struck with the reins that agents were filmed swinging in their direction. But the report outlined the agents' inappropriate behavior toward Haitians, including yelling profanity and insults related to a migrant's national origin, and using unnecessary force against migrants attempting to reenter the United States with food.

The investigation found one agent on horseback grabbed a man and spun him around in a widely photographed incident, which took place near a sprawling riverside encampment in Del Rio, Texas that had formed after the rapid arrival of thousands of Haitian migrants at the U.S.-Mexico border.

According to the report, one agent "acted in an unsafe manner by pursuing the individual he had yelled at along the river's edge forcing his horse to narrowly maneuver around a small child."

The incident originated, the report found, when Texas' Department of Public Security (DPS) officials also on the scene asked for assistance from Border Patrol. A lack of clear command lead the agents to inappropriately follow DPS instructions to prevent migrants from crossing the river back into the United States.

Migrants were frequently crossing into Mexico to bring back food and supplies that were scarce in the makeshift encampment.

Advocates and migrants suing the government over their treatment during the incident said the Haitian man depicted in the widely seen photos described the mounted officer grabbing his neck and only releasing him when the horse was about to trample him.

He called the experience humiliating in a court filing.

Joan Agoh, a spokesperson for the Justice Action Center, one of the groups involved in the lawsuit called on Magnus to ensure "fair and just treatment" of all migrants, adding the CBP agents "must be accountable for the abuse against Haitian migrants in September."

"We are already taking steps to ensure a situation like what occurred in Del Rio doesn't happen again," Magnus said during the news conference.

Of the roughly 15,000 Haitians who arrived at the U.S.-Mexico border in September, about 8,000 were rapidly expelled in the weeks that followed under a COVID-era order known as Title 42.

The findings come as U.S. President Joe Biden, a Democrat, has grappled both operationally and politically with a record-number of attempted crossings at the southwest border with Mexico. Republicans have criticized Biden for trying to reverse some of the hardline immigration policies of his Republican predecessor former President Donald Trump, while some members of Biden's own party said he is not doing enough to protect vulnerable migrants.

U.S. Border Patrol apprehended nearly 223,000 migrants at the southwest border in May, the highest monthly total on record. Haitians made up about 7,700 of that figure, with several thousand more attempting to cross at ports of entry without valid permission.

On Thursday, Texas' Republican Governor Greg Abbott said he had authorized the Texas National Guard and state authorities to "apprehend" migrants and transport them to the border with Mexico. It is the latest in a string of immigration crackdown measures in that state, which earlier included busing migrants out of state to destinations like Washington D.C.

Magnus said that CBP had "a shared interest" with Texas "in maintaining a safe orderly humane immigration process" at the border but said that problems arise when any state "takes unilateral actions."

CBP recently said it would investigate whether anyone from the agency sold unofficial commemorative coins that depict a widely publicized photograph of the incident where a patrol officer on horseback lunges towards a Haitian migrant with a cord.

Magnus said in an earlier statement that the "hateful images" on the "deeply offensive" coins angered him and distracted from the essential work of the Border Patrol.

(Reporting by Ted Hesson in Washington and Mica Rosenberg in New York; Editing by Aurora Ellis)