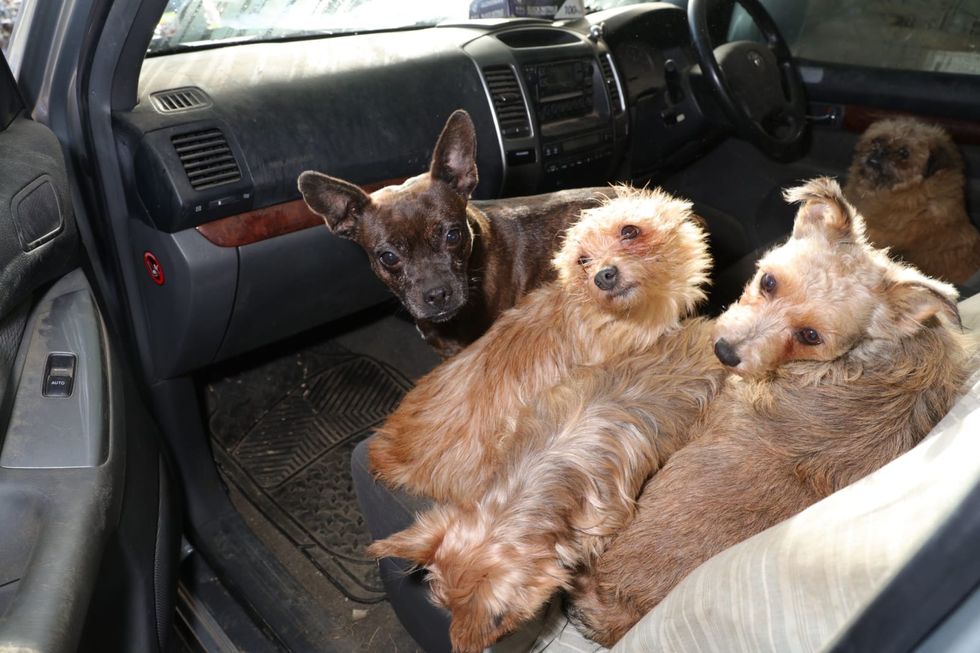 British criminals prick up ears over popularity of pandemic puppy - Dogs are seen in a car. In Wales, Dyfed-Powys police have returned nearly 30 dogs to their rightful owners after police officers found 80 animals at a property in Carmarthenshire. - Heddlu Dyf/Dyfed Powys Police/NPCC/dpa

Many in Britain are, unsurprisingly, longing for a dog, as a panacea for the fear, loneliness and lack of exercise caused by the pandemic. And the criminal world has taken notice.

According to Pets4Homes, a platform for the industry, the price of puppies has more than doubled over the past year, fuelled by this newfound interest, and thieves are also now seeking to profit.

When Will Bevan discovered that his collie's five new puppies had been stolen, he says it felt "like being punched in the stomach."

They were living in a barn, he tells dpa. The thieves left the gate wide open.

Bevan, who is a shepard in Stow-on-the-Wold, a sleepy town in Gloucestershire, works with dogs every day. "They are part of my family, and I can't do my job without them. They mean the world to us," he says.

He took to social media to ask for clues as to the puppies' whereabouts, and his posts have been shared thousands of times.

The Doglost organization, which runs a database on missing dogs, says 465 were stolen in Britain and Ireland last year - more than two-and-a-half times the number recorded in 2019. Most were taken in south-east England, it says, with cocker spaniels the most popular, followed by English springer spaniels and Jack Russell terriers.

Dognapping may be a relatively rare crime, but it has long been a million-dollar business, an undercover investigator told the BBC.

It is not only puppies who are in danger - adult dogs are also stolen for breeding, often under distressing conditions, says the report.

The dogs are given hormones so that they can produce three to four litters annually, the undercover official told the broadcaster.

"Puppy farming is a big business. We have uncovered large criminal gangs making millions of pounds," says the Royal Society for the Prevention of Cruelty to Animals (RSPCA).

It's easy to see why criminal groups have turned their attention to dogs: "It is actually more lucrative, being a dog thief than being a drug dealer," Wayne May, a volunteer working for Doglost, tells dpa.

"If you get caught selling or stealing a stolen dog, you are looking at a fine of about 250 pounds (350 dollars)," he says.

"If you steal someone's dog and you breed from that and you have five puppies - these criminal gangs are selling these puppies between 3,000 and 5,000 pounds," he says.

The group recently recovered a stolen dog. "She had five puppies on her and they were for sale for 5,000 pounds each. So there's 25,000 pounds that person would have made for stealing one person's dog," May says.

Anyone caught with 25,000 pounds' worth of cocaine would be going to prison, he says.

Pet thieves can be jailed for up to seven years, according to government information - but no data is available in terms of how often such penalties and sentences are imposed.

Dog thieves are becoming more bold, not only luring dogs from farms at night but even threatening dog owners during the day or stealing the pets from people's gardens.

The RSPCA recently warned the public that some thieves were posing as inspectors for the organization and driving vans with its insignia.

"Please beware anyone posing to be someone in authority in order to get close to your dog - always ask anyone claiming to be an RSPCA officer to see their ID and look for the badge," a spokesperson says.

Dog theft can be devastating and cause significant suffering for those affected, says Deputy Chief Constable Amanda Blakeman of the National Police Chiefs Council (NPCC).

She advises dog owners not to post photos of their new puppies on social media to avoid attracting thieves' attention.

Bevan, meanwhile, hopes that he can get his puppies back by raising awareness online.

And there is some reason for hope: After all, some 200 stolen dogs were reunited with their owners last year, according to Doglost.